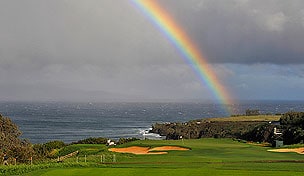 KAPALUA, Hawaii – There's been a whole lot of hurry up and wait this week at Kapalua, and despite a second consecutive day of delays, players have tried to find the silver lining among all the gray skies.

Here's a sampling of quotes from guys on site at The Plantation Course:

“It’s unfortunate for the tournament, the sponsors, the players, the Tour. I mean, everybody involved. But you can’t control the weather.” – George McNeill

'I think it's disappointing but it's kind of to be expected. ... We have all experienced delays before, and so we are all kind of used to this. I think that frustration part was just waiting and waiting and waiting. Since we have a decision, everyone can kind of move on now.' – Hunter Mahan

“When balls roll on the greens, you can’t play them. It’s kind of unfair for the field to have a guy lag a putt up there to two feet and then have it roll back to 20 feet. It’s just unlucky with this weather.” – Matt Kuchar

'It's a tough call to make. They did the right thing. ... It's just a little too windy out there for us to play.' – Brandt Snedeker