KILDEER, Ill. – The KPMG Women’s PGA Championship lays out the possibility of some high drama at Kemper Lakes Golf Club late on Sunday.

All the trouble that lurks along the three finishing holes is getting the players’ full attention in practice and pro-am rounds this week.

They call it “The Gauntlet.”

It requires some steely nerves to close out a lead in the final round.

“I told my caddie I would rather be trailing, where I’d have to be more aggressive, than leading and be defensive,” Jodi Ewart Shadoff said. “Anything can happen on those holes.”

Mike Reid took a two-shot lead stepping to the 16th tee at Kemper Lakes in the 1989 PGA Championship. He drilled his drive right, into the water, made bogey and then also bogeyed the 17th. Payne Stewart beat him by a shot.

Jerry McGee was battling Hale Irwin down the stretch at the Ameritech Senior Open in 1997 when he finished with a pair of triple bogeys.

Ariya Jutanugarn doesn’t put driver in her bag very often anymore, but she said it was an easy decision this week.

“No chance,” she said. “Every hole is pretty tough. The last three holes, really, really tough.”

The 16th is 419 yards, the second-longest par 4 on the course. It looks like the longest with water along the entire right side of the hole, with a forced carry required with the second shot. The 17th is a 170-yard par 3, with water guarding three sides of the green. The 18th is a 384-yard par 4, with a tee shot over water and the approach over water.

Par’s a good score through that stretch.

“You make three pars, you’re going to gain strokes on the field,” Ryann O’Toole said. “I think it’s fun to have that kind of finish.”

Kemper Lakes is a par 72 that will play to a scorecard yardage of 6,741 yards.

With more than 4 inches of rain hitting the area last week, and with more rain falling Tuesday, the course is playing long, but there’s better weather forecast the rest of the week.

“The golf course is in wonderful condition,” PGA chief of championships Kerry Haigh said. “The putting greens are great, the grass cover is excellent. There are no issues there.”

Water can come into play on about half the holes. The fairways average about 30 yards wide, with the rough thick and expected to be topped off at 3 inches.

“The fairways are fairly generous,” Haigh said. “I think the rough will be pretty tough based on the amount of rain we’ve had. The greens are very large, a couple 50 yards in length, where there can be a two- to three-club difference depending on the hole locations.”

“I think it’s going to be a wonderful test,” Haigh said. “It’s a good, solid golf course. There are no tricks to it, it’s all there in front of you.” 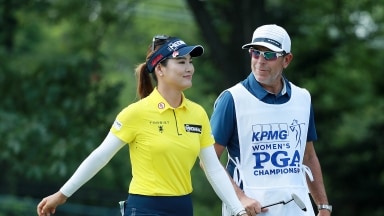 So Yeon Ryu made a couple mistakes Sunday at the KPMG Women’s PGA, but she stayed positive after a playoff loss to Sung Hyun Park. 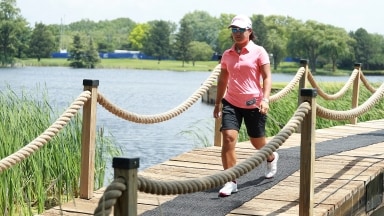 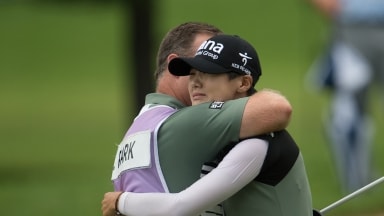 Beneath that unrelenting, steely stare, Sung Hyun Park is just a 24-year-old who struggles with all the pressures that come with being one of South Korea’s superstars.