At PNC Championship, Tiger Woods wants to have fun, but Charlie Woods is all business 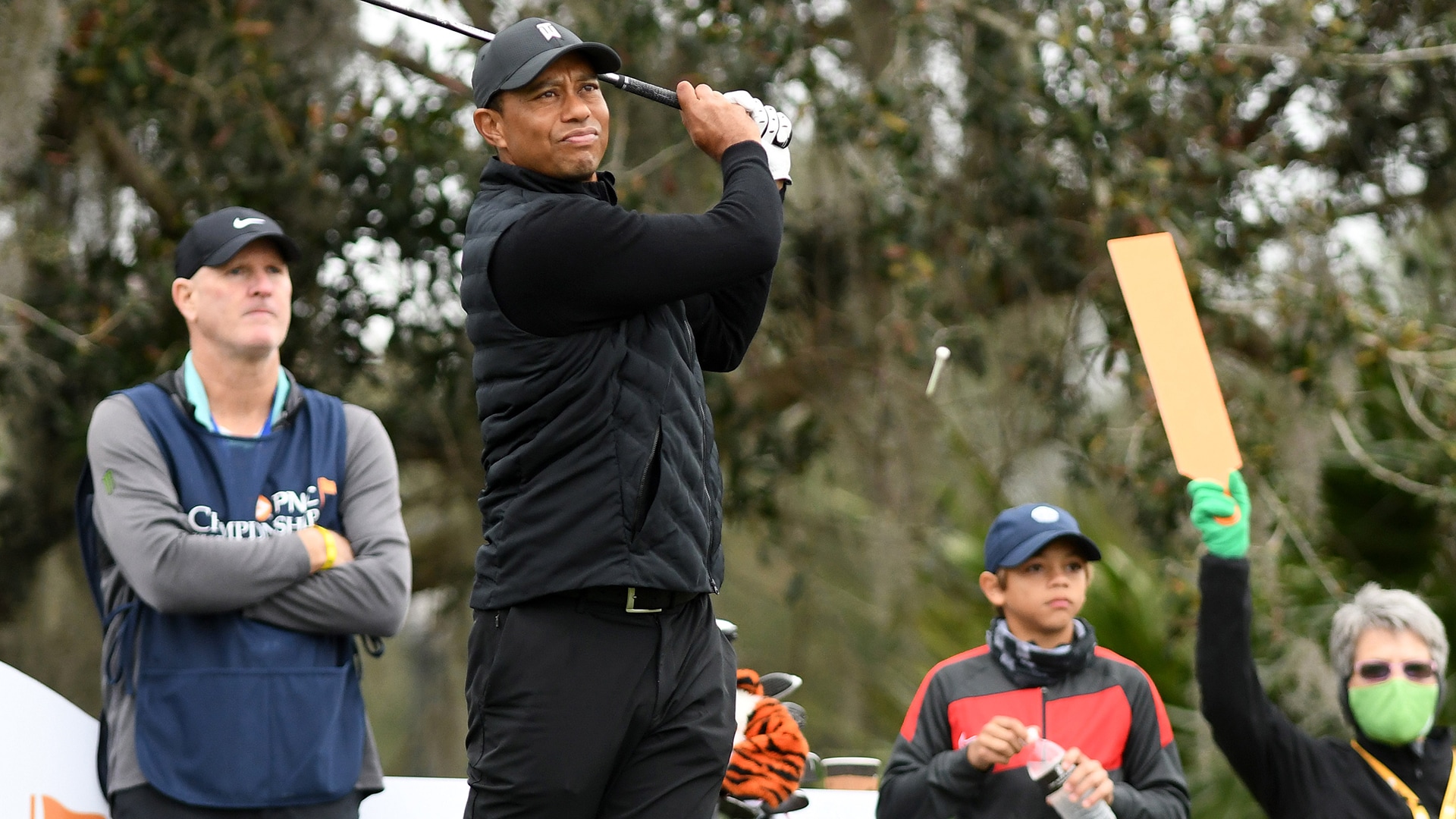 ORLANDO, Fla. – His first start in this distinctly relaxed event promised to showcase off the softer side of Tiger Woods, but Charlie Woods appears to have a different idea.

“For some reason, Charlie just always wants to beat me, it doesn't matter what it is,” said Justin Thomas, who is playing the event with his father, Mike, and is grouped with Team Woods on Day 1. “Although he's never beaten me in golf or a putting contest, he still talks trash just like his dad. It will be fun. We'll have that like inner tournament within a tournament, trying to shut his little mouth up, but it will be fun.”

That 11-year-old edge was on display Thursday as father and son set out in the pro-am together. On the second hole, Charlie Woods launched a drive well past his famous father, albeit from a dramatically closer tee box, and he seemed to give Tiger a wry smile. After missing a putt for birdie on the same hole, the younger Woods wheeled away from the hole and swung his arm into the air in frustration.

For all those who plan to tune in this weekend for a glimpse at the game’s most high-profile prodigy, it will look all so familiar. Before every swing Charlie visualizes the shot, just like dad. After every swing he’s perfectly balanced – yep, dad. Even the way he braced himself against a cold wind early Thursday looked every bit a scaled down version of the original – hands dug deep into his pockets, head down, eyes cast forward and focused.

During a 10-minute talk with reporters following his pro-am the “old man” used numerous versions of fun, enjoyment and happy to describe this week’s unofficial start.

For Tiger this is about no pressure. No drama. Just a chance to hang with one of his favorite people doing something they both love. This isn’t about an 83rd PGA Tour victory or a 16th major championship; this is for family. It’s an endearing side to the 44-year-old that we’ve rarely seen. It also doesn’t seem to be Charlie’s game plan at all.

Following the pro-am, Tiger Woods met with the media. Charlie Woods went to the range. If Tiger’s back doesn’t allow him to spend countless hours honing his action, the younger Woods doesn’t have any of those restrictions and he cast a familiar shadow as the afternoon wore on. Like his father before injury became the overriding arbiter of success or failure, Charlie Woods is relentless in his pursuit of improvement.

Earl Woods never coached Tiger, at least not in the traditional sense. The way Tiger explained it he and his father worked on “feels,” and that’s how he and Charlie have handled things, although Mike Thomas has been asked to lend a technical hand to Charlie’s game from time to time.

“His speed is impressive - he has some incredible speed and it’s not just that he’s 11, he’s a small 11,” Mike Thomas said. “About his game what impresses me is his knowledge. I get he’s Tiger’s son but still, he sees fades and sees draws. He just sees things out there. You don’t teach something like that, you just develop that. Justin was like that. He talked the language at a young age.”

And then there’s the competitive side. While Tiger is reluctant to give too thorough of a glimpse into his home life it’s clear that competition is a centerpiece to everyday life at the Woods compound.

Nearly three years ago, Justin Thomas had just won his first major championship and moved to No. 1 in the world when he agreed to a friendly nine-hole putting contest at Tiger’s house.

“Charlie was leading going into the last hole,” Thomas recalled. “He was like 2 under, I was 1 under and Tiger was even or 1 under. Charlie was mouthing off saying, ‘Here I am, 9 years old beating the No. 1 player in the world and supposedly the best golfer of all time.’ He three-putted and I made it to beat him. I shut him up pretty quick.”

Thomas has to catch himself sometimes when he’s around Charlie. Everything is so familiar with the 11-year-old, from the cutting sense of humor to the club twirl after a particularly pleasing shot, that it’s easy to get carried away.

“He likes to needle me a little bit and I have to remind myself that he’s 11 years old sometimes. I need to remind myself sometimes that I need to watch what I say,” Thomas said. “They are very similar. Who wouldn’t want to be like your dad if your dad was Tiger Woods? He definitely has all the mannerisms.”

Fans will tune in to this weekend’s action out of curiosity. How good can an 11-year-old, even Tiger Woods’ 11-year-old, be? But they will stay because of the familiarity. It’s not often we’re able to turn back the clock in such a dramatic way.

“All kids mimic, and I don’t know if his swing is any different than mine. His feels are similar, hitting shots and reading those shots,” Woods said. “He is competitive, yes. Our whole family is that way -  chirping, that’s what we do.”

Winning is also a Woods family trait but Tiger doesn’t seem to have much interest in that this week. He’s here for the fun and the joy and the bonding. Charlie Woods, however, seems to have other plans.