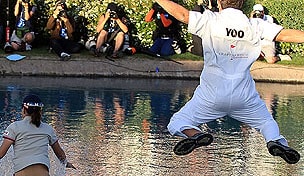 Getty Images
LA QUITNA, CA - JANUARY 22: Joe Ogilvie hits istee shot on the first hole on the Nicklaus Private Course at PGA West during the second round of the Bob Hope Classic on January 22, 2010 in La Quinta, California. (Photo by Stephen Dunn/Getty Images)  -

RANCHO MIRAGE, Calif. – They don’t give out green jackets at the Kraft Nabisco.

They wrap their winners in white robes after they make the traditional leap into Poppie’s Pond. One of golf’s most popular traditions will be renewed Sunday with the winner taking the leap with whomever she chooses to jump with her. Usually, it’s a player’s caddie and family members.

Tseng made the leap in 2010 and arrived this week wanting to go for another swim.

Amy Alcott got the leap started jumping into the pond on impulse after she won in 1988, but the tradition took awhile to catch on. Donna Andrews leaped into the water in 1994 and every winner since has also taken the leap.

“I think that jump is as famous as the green jacket for us,” Natalie Gulbis said. “Everybody wants to jump in that pond. It's something that makes this event cool and different. We all look at that alongside the 18th green knowing and wanting to be jumping in.

“Look at the photos that you guys have up here in the media center.  You don't have shots of these players hitting into the 18th green. You have all the jumps, so that's what makes this event something extra special.”

Poppie’s Pond is named after Terry Wilcox, the former Kraft Nabisco tournament director whose grandchildren called him “Poppie.” Back when the tradition started, players were jumping into water mixed with soupy algae. It’s now a concrete-lined pool with treated water. It was also renovated two years ago after Stacy Lewis’ mother was injured leaping in when she caught her leg on the dropoff.  There’s now a jump zone with a steeper entry.