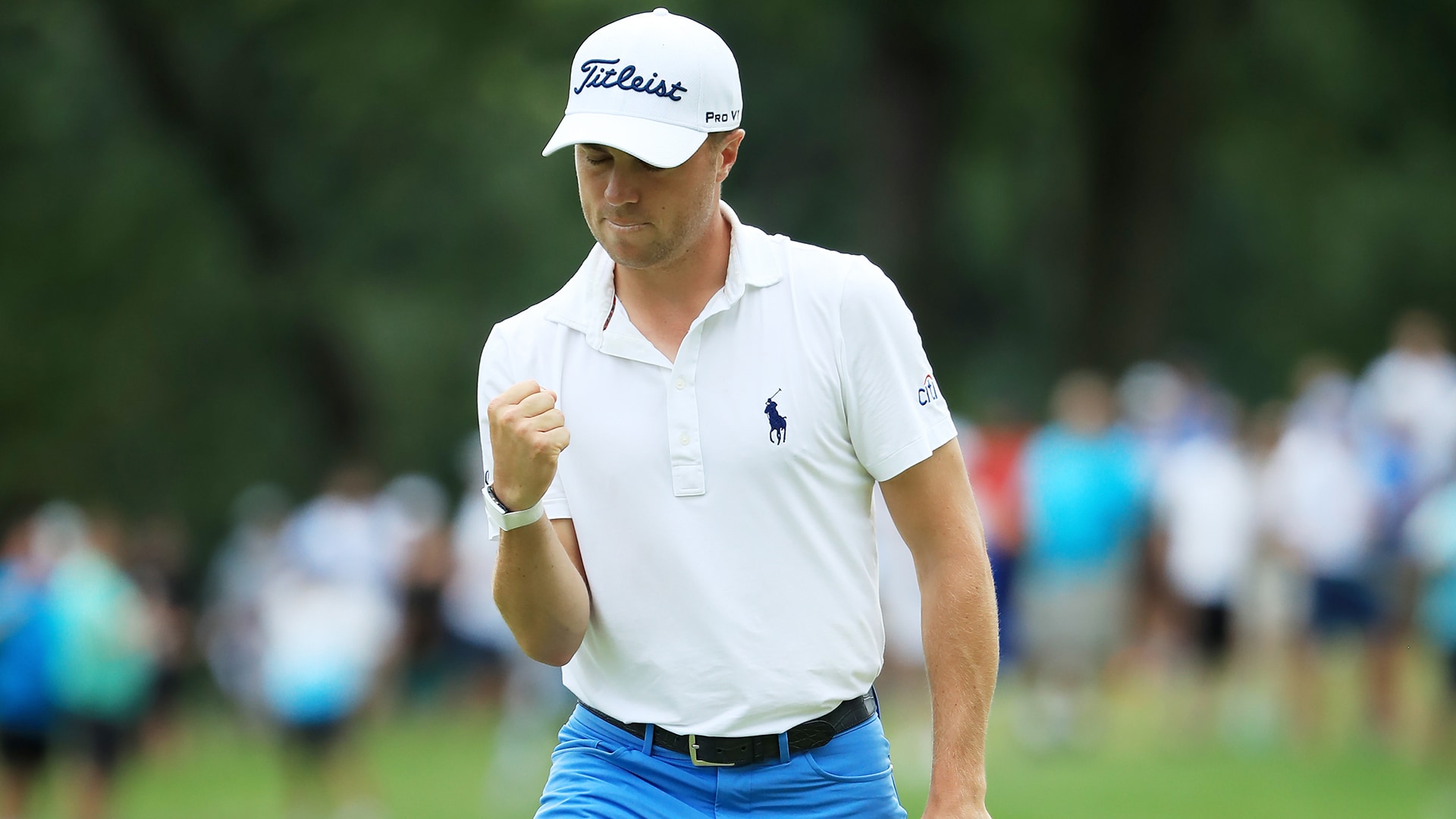 The contests concludes this week with the Tour Championship, as the PGA Tour heads to Atlanta for the season finale where one player will walk away with $15 million and one Pick 'Em champ will pocket $100,000.

Here's a look at some of the players to keep an eye on as the top 30 players vie for a lucrative prize at East Lake:

1. Justin Thomas: Thomas is rounding into form at just the right time, and now that momentum has a tangible benefit to his starting score. Fresh off a dominating win at Medinah, Thomas will start the week at least two strokes ahead of every other participant. It's a well-earned but significant edge on a course where he hasn't finished worse than seventh in each of his first three appearances.

2. Brooks Koepka: Koepka finally relinquished the top spot in the standings last week in Chicago, but only three shots behind Thomas he's certainly well within striking distance. Koepka appears to be the front-runner for a second consecutive Player of the Year award, with three wins including a major and a WGC. He only has one top-10 finish in three East Lake trips (T-6 in 2017) but seems to thrive whenever the stakes are raised.

3. Rory McIlroy: One year ago McIlroy wasn't able to chase down Tiger Woods in a memorable final pairing. This time around he'll start the week at -5, five behind Thomas, on a course where he won both the Tour Championship and FedExCup titles three years ago. McIlroy's T-19 finish at Medinah was a relative step back based on his two prior starts, but he's finished outside the top 10 only once before in five trips to Atlanta.

4. Patrick Cantlay: Cantlay couldn't keep pace with Thomas Sunday at Medinah, but a remarkably solid season that included a win at the Memorial netted him the second slot to start the week in Atlanta, two behind the points leader. Cantlay is in the top 15 in every major strokes gained category for the season, and despite middling finishes in his first two Tour Championship appearances it wouldn't come as a surprise if he lifts the trophy on Sunday.

5. Jon Rahm: Rahm has been an absolute force over the last two months, finishing T-11 or better in each of his last seven worldwide starts. That includes top-5 finishes in each of the first two playoff events, and although he'll start the week at 4 under he remains one of the most likely candidates to make a move from the middle of the pack on a course where he's finished seventh and 11th in his first two appearances.

6. Webb Simpson: Simpson quietly has been one of the best players in the world this summer, with 11 straight top-30 finishes dating back to the Masters. He'll start the week alongside Rahm at 4 under, and his East Lake pedigree includes three top-5 finishes in his last five trips dating back to 2012.

7. Justin Rose: It was a year ago that Rose left Atlanta $10 million richer, and now he's back to defend his FedExCup title. The Englishman faces an uphill battle given that he'll tee off eight shots behind Thomas, but few in this week's field can rival his affinity for the host course. Rose is something of an East Lake specialist, having recorded six straight top-10 finishes including a pair of runner-up results.

8. Patrick Reed: Reed might not have factored on this decorated list were it not for his victory two weeks ago in New Jersey, which is a big reason why he'll tee off at 6 under. Amid a limited field it's a significant edge on several competitors, and Reed has been trending in the right direction since late June. But given his mediocre East Lake record, this is more about the power of the adjusted starting total.

9. Dustin Johnson: Johnson has a strong record in Atlanta, with T-6 or better finishes in four of his last five appearances, and his game can challenge any venue. This might be more a question of motivation, as Johnson's second half of the season hasn't contained many highlights and he appeared listless at times at the BMW. But if Johnson's focus renews at East Lake, he has all the talent to contend.

10. Xander Schauffele: It was two years ago that Schauffele was part of a split trophy photo op, winning the Tour Championship while Justin Thomas took home the FedExCup. He finished T-7 last year in his East Lake return and is now back for a third straight appearance after a season that included a pair of wins. Schauffele finished T-2 at the Masters, T-3 at the U.S. Open and will begin the opening round at 4 under par.