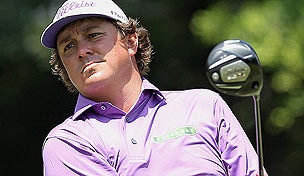 The 2013 PGA Tour season begins this week, as those who won events in 2012 are invited to Kapalua for the Hyundai Tournament of Champions. A limited field of 30 players will look to begin their season with a win at the picturesque Plantation Course.

Steve Stricker returns to defend his title from last year, when he broke 70 in each round en route to a three-shot victory. Here are 10 players to keep an eye on this week:

1. Jason Dufner: Perhaps the most consistent player on Tour in 2012. Second in ball-striking, third in the all-around ranking and fifth in birdie average, the unflappable Dufner should get off to a good start in 2013.

2. Matt Kuchar: The reigning Players' champion finished third here in 2010 and followed that with a T-6 showing in 2011, his most recent appearance. Solid ball-striking and a low ball flight should both be assets this week.

3. Bubba Watson: If ever there was a player seemingly born for this venue, it's Watson. Less than ideal results in two career starts here, but the lefty should have success this week on the lengthy Plantation Course.

4. Steve Stricker: Defending champion who also has recorded two other top-four finishes here since 2008. It appears that the Wisconsin native feels right at home in Kapalua.

5. Keegan Bradley: Finished 16th here last year in his first appearance, but closed with a final-round 65. Like Watson, a player who will have no trouble with the length presented by this week's venue.

6. Webb Simpson: Along with Stricker, one of only two players to break 70 in each round last year en route to a T-3 finish. Also co-led the field last year in GIR percentage, reaching 63/72 greens in regulation.

7. Brandt Snedeker: Defending FedEx Cup champion showed in the second half of 2012 why he may be the best putter in the game. First appearance in this winners-only event since 2008.

8. Ian Poulter: Parlayed his Ryder Cup success into a WGC victory in China in November. Long known as one of the best match-play players in the world, the Englishman is poised to bolster his stroke-play credentials in 2013.

9. Scott Piercy: Quietly completed a 2012 campaign where he ranked in the top 20 on Tour in driving distance, birdie average and the all-around ranking. Will look to continue the momentum of three top-10 finishes with which he concluded last year.

10. Dustin Johnson: Yet another long hitter who should thrive on the Plantation Course with five par-5 holes. Having missed the event last year due to injury, Johnson will look to bounce back this year after finishing second on Tour in 2012 in par-5 birdies or better.