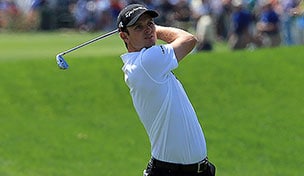 A full field of 145 players have descended upon Ponte Vedra Beach for one of the season's biggest events, The Players Championship. The Stadium Course at TPC Sawgrass often serves as a backdrop for some of the season's most dramatic moments, and this year will likely be no exception.

Matt Kuchar returns to defend the title he won last year over a group of four players that included Rickie Fowler and Zach Johnson. Here are 10 names to watch in one of the Tour's marquee events:

1. Justin Rose: His record at TPC Sawgrass may not be impressive, but his record in 2013 certainly is. The Englishman has finished inside the top 25 in each of six PGA Tour starts this year, including a runner-up at Bay Hill. Rose is currently second on Tour in both scoring average and total driving, sixth in GIR percentage and third in the all-around ranking.

2. Luke Donald: Coming off a T-3 finish at Harbour Town in his last start, Donald is the only player to crack the top 10 at TPC Sawgrass in each of the last two years (T-4 in 2011, sixth in 2012). The Englishman was also a runner-up here in 2005 and seems to thrive on a course where his world-class short game is put on display.

3. Adam Scott: Making his first start since a breakthrough win at the Masters, Scott returns to a course where he won in 2004 and finished T-15 a year ago. The Aussie has played sparingly thus far in 2013, but when he's teed it up he has played well, with top-10s at both Doral (T-3) and Riviera (T-10).

4. Graeme McDowell: Fresh off his playoff win at the RBC Heritage, McDowell heads to Ponte Vedra with four top-10 finishes in his last six starts. The Ulsterman is fifth in scoring average, sixth in strokes gained putting and seventh in driving accuracy, and was the 54-hole leader here two years ago.

5. Lee Westwood: His tie for fourth at Quail Hollow was his third straight top-10 dating back to the Shell Houston Open, and the Englishman shows no signs of slowing down after turning 40. He's finished in the top 10 three times at TPC Sawgrass, including a T-4 finish in 2010 when he led after both 36 and 54 holes.

6. Jim Furyk: A resident of Ponte Vedra Beach, Furyk will hope to use local knowledge to his advantage this week. In his last 10 Players starts, the former U.S. Open champ has more top-five finishes (three) than missed cuts (two), and entering the week fifth on Tour in driving accuracy he should find plenty of fairways off the tee.

7. Tiger Woods: Now 12 years removed from his lone Players triumph, Woods' record at the Stadium Course is well-documented. His results this year have been stellar, though, including three wins and a tie for fourth at the Masters.

8. Phil Mickelson: After a near-miss in Charlotte, Lefty returns to TPC Sawgrass where he won in 2007 and has recorded seven other top-25 finishes. A winner earlier this year in Phoenix, Mickelson now leads the Tour in birdie average and sits 16th in strokes gained putting.

9. Henrik Stenson: A winner here four years ago, Stenson tied for 15th a year ago and is beginning to show signs of the form that helped him hoist the crystal trophy. The Swede has a pair of top-10 finishes in his last three starts, and now leads the Tour in GIR percentage while ranking third in driving accuracy.

10. Billy Horschel: Making his first start in this event, Horschel may be the most confident man in the field. He enters off his breakthrough win in New Orleans, his fourth straight top-10 result, and now ranks inside the top 10 on Tour in birdie average, total driving, par-4 performance and the all-around.