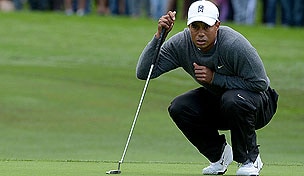 This week the PGA Tour holds its first World Golf Championship of 2013, as 64 of the game's best head to Dove Mountain in Marana, Ariz. for the Accenture Match Play Championship. Divided into four brackets, players will compete all week in individual, single-elimination matches until a winner is crowned.

Hunter Mahan is back in the field this year, ready to defend the title that he won last year over Rory McIlroy in the final match. Here are 10 players to watch this week in one of the most unpredictable events of the year:

1. Tiger Woods: Making his first start since a dominant win at Torrey Pines, Woods enters as the No. 2 overall seed in search of his first Match Play title since 2008. Though he hasn't advanced past the second round in three appearances since, his game appears able to carry him to the third round and beyond this week.

2. Charl Schwartzel: Flat-out the hottest player in the world right now. After several high finishes over the past two months, the South African tied for third on the friendly kikuyu grass at Riviera. No one will have more confidence this week at Dove Mountain.

3. Rory McIlroy: The top overall seed, McIlroy made it to the finals last year but missed the cut in his lone professional start of 2013 in Abu Dhabi. Rust and new equipment may still be factors, but the Ulsterman can't be overlooked.

4. Ian Poulter: The match play ninja. Poulter won this event in 2010, won the Volvo Match Play the following year and his Ryder Cup singles record is well-documented. Poulter was ousted in the first round each of the last two years, but the Englishman may be poised for another deep run this week.

5. Luke Donald: A winner here in 2011, Donald has won at least two matches in five of eight appearances in this event. The Englishman will begin the week as the top seed in the Snead bracket after a solid showing at Hogan's Alley last week.

6. Matt Kuchar: Kuchar made the quarterfinals last year after a third-place showing the year prior, and showed positive signs with an opening 64 at Riviera. A potential second-round matchup with Sergio Garcia looms, but the Players champion has shown an affinity for both the venue and format this week.

7. Louis Oosthuizen: Making his first start in the U.S. since a strong run through the 2012 FedEx Cup Playoffs, Oosthuizen already has a win under his belt at the Volvo Golf Champions last month. Though perhaps the least-hyped top seed, the South African's game tee-to-green is among the best in the world.

8. Nick Watney: Has made it to the third round each of the last three years, including ousting Tiger Woods a year ago. Though he has struggled somewhat since a T-4 at Torrey Pines, Watney's draw may open up if he can defeat match play veteran David Toms.

9. Adam Scott: Quietly notched a tie for 10th at Riviera after a successful 'off-season' that included a win in his native Australia. Though he has only won two matches in six MPC appearances since 2007, the Aussie's game is showing no signs of early-season rust.

10. Webb Simpson: The U.S. Open champ appeared in position for a win at Riviera, but nonetheless added another solid finish to his early 2013 season that now includes three top-20s in five starts. Should he keep up his strong play, a third-round match with Tiger Woods may await.