Premier Golf League CEO: 'This only happens if everybody wants it to happen'

After weeks of speculation, the Premier Golf League has begun to lift the veil.

On the same day that the PGL’s verified Twitter account surfaced online, an hour-and-a-half interview with the league’s CEO, London financier Andrew Gardiner, was released by the Rick Shiels Golf Show Podcast.

“A true test of the best,” said Gardiner, the current director of Barclays Capital, who's vision sees the PGL one day sitting at the top of the golf-competition pyramid.

Gardiner offered many details of the world-tour concept, some of which have already been reported. The league, which is aimed to launch in January 2022, will feature 48 players competing among 12 four-person teams (similar to the Formula One racing circuit) in 18 no-cut, 54-hole tournaments with purses of $10 million each. The events will be played in four continents: 10 in the U.S., four in Asia (including one in the Middle East), three in Europe and one in Australia.

The season will run from January to August and will not conflict with the four major championships. As for how the PGL would coexist with longstanding tours such as the PGA Tour and European Tour, Gardiner hopes to “achieve collaboration.”

Gardiner added that the PGL, which he noted “has a lot [of financial backing],” has built relationships with many people in the game, from funders to broadcasters to players. But he declined to talk about specific conversations, including talks with Tiger Woods and other stars deemed vital to the league’s existence. 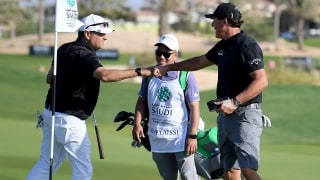 “This only happens if everybody wants it to happen, and that includes the best players in the world,” Gardiner said.

Since news of the upstart circuit first broke last month, many players have spoken out about the PGL. Phil Mickelson, who played with Gardiner in a pro-am at the Saudi International, said he was “intrigued” by the idea and added recently, “I’m going to guess by The Players I’m going to have a pretty good opinion.”

Woods last week confirmed that he had likewise been approached, but he failed to elaborate, adding, “We're looking into it.”

Other players have been more direct. Charley Hoffman said that while as an independent contractor he’d have to think about it, especially with high stakes involved, he didn't know if he "would like to be owned by some Saudi money over there.” (Gardiner said the Public Investment Fund of Saudi Arabia is involved.)

Bubba Watson took a firmer stance: “It doesn't matter to me, I'm playing on the PGA Tour.”

But the real perceived gut punch to the PGL's hopes came from the mouth of world No. 1 Rory McIlroy.

“The more I've thought about it, the more I don't like it,” Rory McIlroy said this week in Mexico City. “The one thing as a professional golfer in my position that I value is the fact that I have autonomy and freedom over everything that I do. If you go and play this other golf league, you're not going to have that choice.”

Gardiner called McIlroy’s comments “very interesting,” but didn’t appear overly concerned despite stressing the PGL’s need for support from the best players in the world.

“It brought to mind the Mark Twain quote, ‘Rumors of my death were greatly exaggerated,’ as if this were some fatal wound,” he told Golf Digest in another interview.

In addition to player involvement, there are other unknowns surrounding the PGL. Gardiner wouldn't disclose potential host venues, though he did bring up the possibility for bids while adding that he prefers some consistency with the tour stops. He also couldn't confirm whether or not PGL events would receive world-ranking points – he reasoned they would – or if women's events would be added, though Gardiner said he'd be "delighted" to have that as part of future plans.

Gardiner did, however, offer up these further details: shotgun starts for each of the first two rounds; no dress codes sans for potential team uniforms and colors; a draft system, transfer window and promotion and relegation similar to professional soccer; and a “team principal” concept where team captains, playing or non-playing, would select two individuals from their team to count each day, similar to how college golf coaches select lineups.

And then there’s the playoff concept. After 17 events, an individual champion will be crowned and the teams will be seeded for the 18th and final event. Top seeds would get byes and get to choose their second-round opponents. Gardiner didn’t fully explain, but it’s reasonable to expect some sort of bracket, head-to-head format that leads to one world team champion.

Indeed, the curtain has started to rise. As for what else lies behind it, that remains to be seen.

“This could be forgotten in a few weeks' time,” Gardiner said, “or this 30 years from now could be looked back upon as the change that was good from the game and made it stronger.”

While the two are sometimes pitted as rivals, Rory McIlroy told PGA Tour Radio that he recently fielded a call from Brooks Koepka to discuss the PGL.