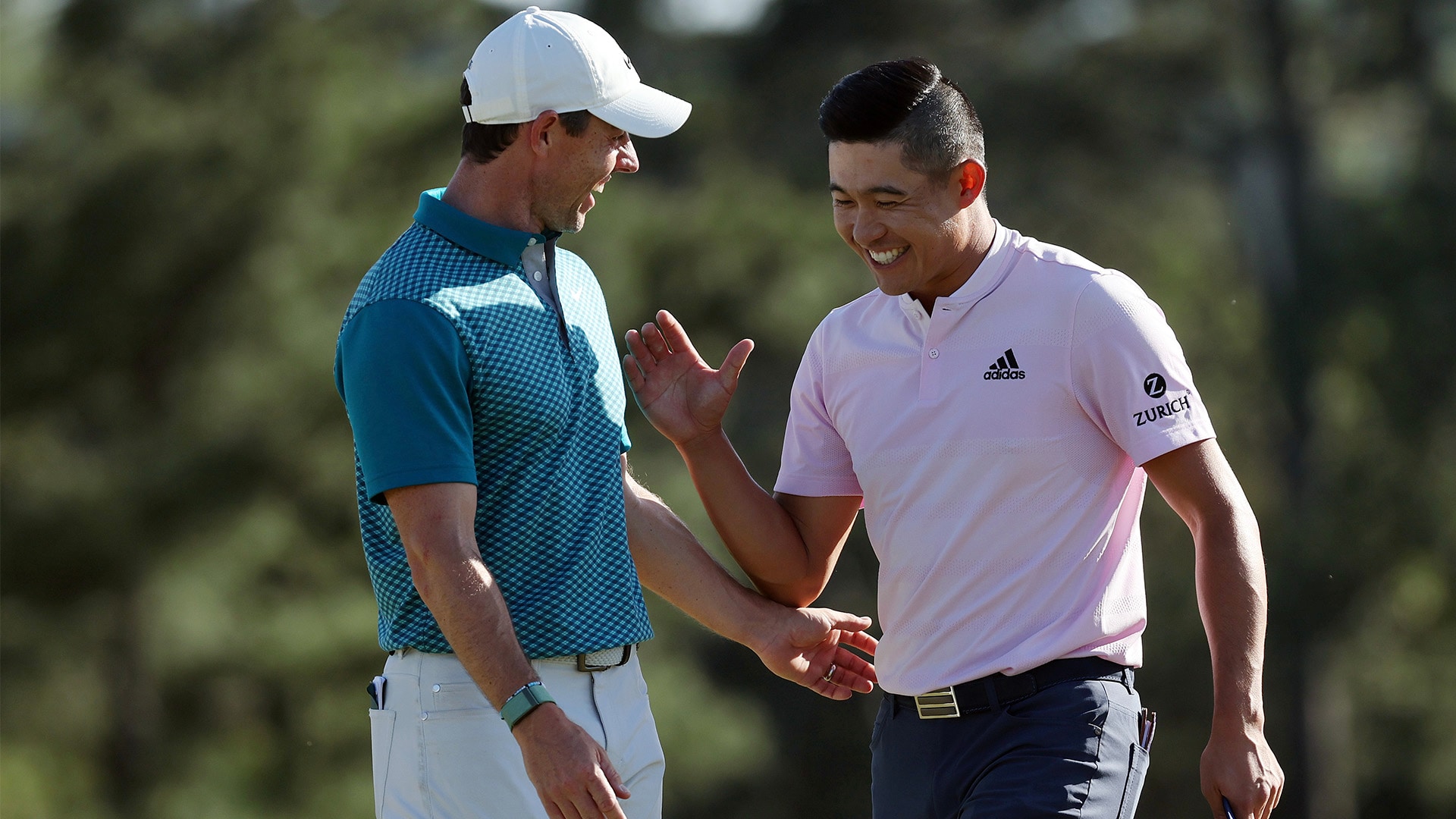 So, as the new PGA Tour season begins this week in Napa, California, it’s the perfect time for our GolfChannel.com staff to answer several big questions, from top rookie picks to most likely first-time major winners to potential Ryder Cup surprises.

Who wins PGA Tour Player of the Year?

REX HOGGARD: Tony Finau. With a monsoon of respect for last season’s POY Scottie Scheffler, Finau delivered the most consistent game the second half of the season with back-to-back victories at the 3M Open and Rocket Mortgage Classic, and two runner-up showings. Finau will need to step up his game in the majors, but he has all the tools to take the next step and become a dominant player.

BRENTLEY ROMINE: Collin Morikawa. Some may say I'm going heart over head with this pick, but I'm highly anticipating a huge bounce-back season out of Morikawa. He went winless this year after racking up five titles, two of them majors, in the previous two years combined. Still a top-3 iron player in the world, Morikawa will make up for his lack of trophies and win at least three times this season, including another major (perhaps the U.S. Open at LACC, where he went 4-0 in the 2017 Walker Cup).

COLBY POWELL: Rory McIlroy. The 22-time PGA Tour winner and reigning FedExCup champion is due for a monster season. He has fully taken the reigns as the face of the Tour and is playing some of the best golf of his career. The only thing McIlroy needs to do at this point is win his fifth major championship, and it feels like it’s time. The Northern Irishman finished top 10 at all four majors in 2022 and has been close a number of times since his last major triumph in 2014. McIlroy will end the drought in 2023, which will propel him to the Jack Nicklaus Award.

MAX SCHREIBER: Justin Thomas. Adding Jim "Bones" Mackay to his bag last season rejuvenated him, as Thomas had 10 top-10s, tied for the third most on Tour. And by winning the PGA, he ended his five-year major winless drought and knocked the weight off his shoulders, which should help as he tries to win another one. Plus, he has the stuff to turn all those almost-victories from last season into wins this year.

PATRICIA DUFFY: Rory McIlroy. The best is yet to come for the Tour’s franchise player. He’s not just the league’s biggest advocate, he’s been playing the most consistent golf of anyone in the world for months. Scottie Scheffler might be hanging to world No. 1 right now, but McIlroy will usurp him there and succeed him as the next Jack Nicklaus Award recipient when his game peaks in 2023. But let’s be real, what the Northern Irishman really wants is his fifth major – the best of which would be the green jacket that has eluded him all these years.

Who wins Rookie of the Year?

HOGGARD: Taylor Montgomery. He might have been the most consistent player on the planet the last four months with just a single finish outside the top 10 in his last eight starts on the Korn Ferry Tour and he finished second on the priority list without a victory, which is a testament to that consistency. He also enjoyed a taste of success on the PGA Tour with his tie for 11th at the Farmers Insurance Open last year.

ROMINE: Davis Thompson. Another University of Georgia product on the PGA Tour, what else is new? This year's rookie class is absolutely flush with studs, but none catches my eye like Thompson. He's a complete player who has reached the pinnacle of the world amateur rankings and though he was a bit inconsistent last season on the KFT, I see him figuring it out and becoming a top-25 machine.

POWELL: Austin Eckroat. As an Oklahoma State alum, perhaps this is a bit of a homer pick, but Eckroat has the game to pop in his rookie season. Eckroat was in the first PGA Tour University class after a great college career in Stillwater and continued his good play on the Korn Ferry Tour. He ultimately finished third in KFT Finals after a runner-up performance at the Korn Ferry Tour Championship. His season included 10 top-25s and two second-place finishes, as well as a stretch of golf in which he recorded a score of par or better in 33 consecutive rounds.

SCHREIBER: Ben Griffin. His story may be the sport's best. He quit competitive golf in 2021 and became a mortgage loan officer. Then, he returned to the game and locked up a Tour card via the KFT regular-season top-25, thanks to three runner-ups. He also placed fourth at the Wyndham Championship and was eighth in KFT in putting average. He did, however, end his KFT season with five straight MCs, but if he gets right on Tour, he will be an all-time Cinderella story.

DUFFY: Carl Yuan. There’s so much to love about Yuan that you can’t help but to root for him. The best part is, he’s as good at golf as he is likeable. No course seems too tough for the eccentric talent that will make you laugh with his unique swing. The 25-year-old essentially got an extra season of training on the Korn Ferry Tour after being positioned to earn his card in 2021 and, instead, opted to miss the end of the season so he could represent China at the Olympics. Now, he’s an Olympian and a Tour rookie with an undeniable confidence that will put veterans on notice.

What player is most likely to win his first major?

HOGGARD: Will Zalatoris. At 26, Zalatoris has done everything except win a major. In 10 Grand Slam starts, he has six top-10 finishes, including near misses at the ’21 Masters and this year’s PGA Championship and U.S. Open. Assuming the back injury that kept him out of the playoffs and next week’s Presidents Cup isn’t serious, it’s just a matter of time before he breaks through at one of the game’s biggest events.

ROMINE: Tony Finau. OK, so who wouldn’t want to see this nice guy lift some major hardware this season? For the first time since 2017, Finau didn't post a top-10 in a major this year. Still, a player who has 10 top-10s in 26 career major starts won't be shut out for long. He's learning how to win more consistently on Tour and his top-5 ranking last season in strokes gained: tee-to-green proves that his talent hasn't gone anywhere. Finau wins the Masters in 2023, book it.

POWELL: Tony Finau. There are names higher on the list than Finau who have yet to capture one of golf’s four biggest championships, but it feels like Finau figured something out this past summer that could unlock his full potential. He’s also an underrated performer at majors, already having three top-10s at the Masters, three at the PGA Championship, two at the U.S. Open and two at The Open Championship. He’s been close, and now he has the confidence of a couple more PGA Tour victories under his belt.

SCHREIBER: Tom Kim. Will Zalatoris, Cam Young and Xander Schauffele are obvious choices here, so let's think outside the box with Kim. This past season, at age 20, Kim claimed his first Tour win at the Wyndham Championship and cracked the OWGR's top 20. Kim is set up to have a moment reminiscent of Morikawa's 2020 PGA Championship win when Morikawa became a major champion in only his second major start.

DUFFY: Will Zalatoris. The 26-year-old suffered an unfortunate season-ending back injury that kept him out of the Tour Championship, but not before he could finally secure his first title on Tour at the FedEx St. Jude Championship – in riveting fashion, no less. Zalatoris is calculated, poised and systematic in a way that makes me believe he’ll pick up right where he left off in his return and continue his major-specialist ways. It’s only his third season on Tour, and he already has three runner-up finishes in 10 major starts.

What top-10 player won’t be there by season's end?

HOGGARD: Cameron Smith. This has nothing to do with Smith’s performance on the course, which was nearly flawless this year, and everything to do with the fractured world of professional golf. His move to LIV Golf will keep him off the PGA Tour for at least a year and even with the occasional cameo at the majors his world ranking is sure to plummet.

ROMINE: Viktor Hovland. Cameron Smith seems like the easy answer here as LIV Golf continues to petition for world-ranking points, but for sake of not being boring, I’ll be slightly less boring and go with the guy who is No. 10 in the current OWGR. Hovland finished 60th on Tour in strokes gained: tee-to-green last season. Sure, a lot of that is due to his poor around-the-green skill, but he also wasn’t as prolific off the tee last season. The numbers normally don’t lie, and with no margin for error in terms of sticking in the top 10, I think he’ll have difficulty staying there unless he drastically improves his chipping or returns to being a top-5 driver of the golf ball.

POWELL: Collin Morikawa. Excluding Cameron Smith, there isn’t an obvious choice here. The top 10 is loaded with young talent and players on the rise, but it feels like Morikawa is headed in the wrong direction. The two-time major champ was once as high as No. 2 in the world, but now sits ninth and hasn’t hoisted a Tour trophy since the 2021 Open Championship. Morikawa ranked 131st in strokes gained: putting in 2021-22 and was even worse around the green, ranking 152nd in that category. The iron play is still elite, but the short game will have to come around if he wants to remain inside the top 10.

SCHREIBER: Cam Smith because of LIV, but of the non-LIVers, Collin Morikawa. After a winless 2022, Morikawa is destined to get back in the winner's circle this season. However, it seems like he may be one of those players whose game is best on the sport's biggest stages. Could too many lackluster weeks on Tour prevent him from making a big jump in the world rankings?

DUFFY: Beyond the obvious, Collin Morikawa. He’s already nearly on the bubble at No. 9 and dropping fast. The 25-year-old started last season so strong – six-straight top 10s – that it’s all the more baffling he didn’t win a single tournament. Don’t get me wrong, there have still been glimpses of his greatness – fifth-place finishes at the Masters and U.S. Open, to name two – but while his swing slump is supposedly resolved, until he is once again atop the leaderboard, you can’t call him one of the top 10 players in the world. He’s not right now, but we’ll see if it stays that way. 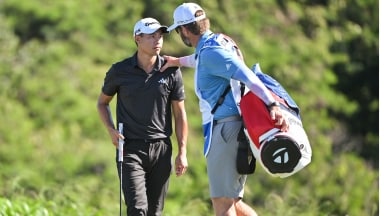 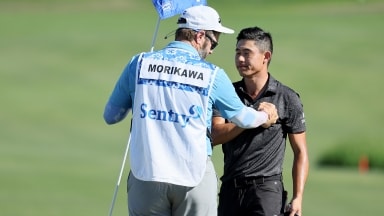 Collin Morikawa was surrounded by some of the most beautiful views in the world. But Sunday afternoon at Kapalua, no one could blame him if the 26-year-old wanted to get away from it all.

Rahm stuns Morikawa, rallies from 7 back

Jon Rahm began the bold new year on the PGA Tour by coming from seven shots behind to win the Sentry Tournament of Champions.