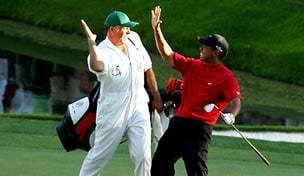 The Masters has showcased some of the greatest shots in golf history. GolfChannel.com writers weigh in with their favorite shots in tournament history.

Woods and Chris DiMarco had both birdied the 15th hole to set up a duel down the stretch. DiMarco’s ball was in the center of the green on 16 and Woods pulled his tee shot left.

The set-up by television announcers Verne Lundquist and Lanny Wadkins was perfect.

“He’s picked out a landing spot that is a good 25 feet above the hole,” Lundquist said.

Said Wadkins: “There’s a good chance he doesn’t get this inside DiMarco’s ball.”

Then Woods hit the shot.

“Here it comes. Oh my goodness,” Lundquist said. The ball sat on the edge of the hole, then dropped a couple seconds later. “OH, WOW. In your life have you seen anything like that?”

The patrons went nuts. Woods went nuts and attempted an awkward high-five with former caddie Steve Williams. It all added to the priceless moment.

What many forget is that Woods bogeyed 17 and 18 but dispatched of DiMarco with a birdie on the first playoff hole. Woods hasn't won the Masters since.

Ultimately the chip-in on 16 was a shot that Woods had to have. In my book, it's the best shot in Masters history.

Maybe it was because it was my 18th birthday. But Tiger Woods’ chip-in on 16 at the 2005 Masters remains one of my most indelible golf-watching memories.

Long and left of the green, Woods pitched onto the green, and his ball took a hard right turn, and it tracked toward the cup, and then it just hung there, impossibly, agonizingly, before finally tumbling into the hole.

In my living room, both my popcorn bowl and IBC Root Beer – hey, I was 18, remember – crashed to the hardwood as I leaped off the couch and touched the ceiling, a tall task, literally, for my 5-foot-9 frame. Having watched the replay herself, my mom wasn’t even upset by the mess.

Much like all the other incredible shots that eventually find a place in Masters lore, Woods went on to win that year, in extra holes. And even now, the replay is hair-raising.

It was called “The Shot Heard 'Round the World.”

Now, it’s the shot that echoes through history.

Gene Sarazen’s albatross, or double eagle, if you like, in 1935 has to rank as my favorite Masters shot even though it's unlikely there’s anyone still alive who saw it. It doesn’t matter. An albatross is rarer than a hole-in-one, so pulling it off in the final round of the Masters and then going on to win has to rank as the best shot in major championship history. Sarazen's famous shot was a holed 4-wood from 235 yards at the 15th hole. The next day, he beat Craig Wood in a playoff.  Notably, Sarazen was playing alongside his rival, Walter Hagen, when he made the shot.

From a trampled-down lie left of the par-3 16th green late on another glorious Masters Sunday in 2005, Tiger Woods hoisted his second shot high into the spring sky and watched as the effort twisted and turned its way to the precipice of the cup where it hung for an eternity. A fraction of a moment later the ball dropped and the ground shook.

It was the perfect shot in every way, from the timing – late in a heated back-and-forth with Chris DiMarco that ultimately ended in a playoff – to the degree of difficulty.

A day later on the practice range at Harbour Town Golf Links, one PGA Tour type put the historic shot in perspective: “It’s not that he chipped the ball in. It’s that his ball almost stopped before it got to the hole. You can’t stop that ball coming from that direction toward the water. That was insane.”

With apologies to Bubba Watson and his twisting wedge shot from the woods right of No. 10 in last year’s playoff and Phil Mickelson and his emotional putt at the 72nd hole to secure his first green jacket in 2004, Woods’ chip-in at the 16th hole is, by any definition, the best in show.

Jack Nicklaus’ birdie putt on 17 that he walked into the hole in 1986. Tiger Woods’ chip that hung on the lip at 16 before dropping in 2005. Bubba Watson’s mercurial bender from the trees in last year's playoff.

What do they all have in common? None of 'em has a name.

OK, so being called “The Shot Heard 'Round the World” even 78 years later may not be the sole thing that separates Gene Sarazen’s albatross hole-out on 15 in the 1935 edition of the Masters, but the fact that it’s still recalled with such reverence so long after the major players in the scenario have passed on speaks volumes as to what a historic moment it was in the history of the event.

To this day, Sarazen’s 4-wood from 235 yards remains the only 2 on the par-5 hole in competition. It allowed him to tie Craig Wood atop the leaderboard, then beat him in a playoff the next day to win the title.

You really can’t go wrong when picking a best shot in Masters history. For me, though, the one heard 'round the world stands above all others.

I’m not sure what the rule is on including a shot you never saw live, but I’m doing it anyway. For me, Larry Mize’s chip-in to win the 1987 Masters embodies everything that is wonderful about this event.

On one hand, there is the shot itself – a 140-foot pitch over mounds to a pin closely guarded by an inviting lake should the effort be just a bit too bold. Mize was playing from a spot short of the 11th green that players rarely visit, but he played the shot like he had been practicing it all week. On a course largely defined by its nuanced greens, it’s only fitting that my favorite shot occurred around one of the more treacherous surfaces Augusta National has to offer. It also didn’t hurt the narrative that Mize’s sudden-death victory came over two of the greatest players of the 1980s, Greg Norman and Seve Ballesteros.

More than just the execution, though, Mize's shot has come to represent the seismic shift a player’s career undergoes with a victory amid the azaleas. With one deftly placed shot, a relatively unknown player from Augusta, Ga., became a major winner – a Masters champion – and earned the privilege of returning year after year to relive not just his win, but the winning shot itself. That’s the Masters in a nutshell: one brief moment of greatness, if executed when called upon, can earn a player a lifetime of adulation.