Punch shot: How many majors will Woods win in 2013? 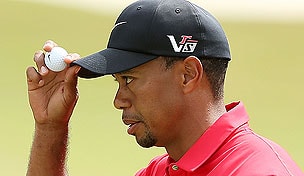 Tiger Woods has two PGA Tour victories in four starts this season. But he hasn't won a major championship since 2008. Will his good form in 2013 end that drought and revive his quest to break Jack Nicklaus' major-victory record? GolfChannel.com writers weigh in with their predictions on how many majors Woods will win this season.

Tiger Woods looked concrete-solid, and frightening familiar, at Doral. Power fades off the tee. Dialed-in irons and wedges. An improved putting stroke. Such a commanding performance always leads to hyperbole, and for good reason.

Tiger is the favorite to win a major each time he tees it up. And he should win a major this season, if only because of the superb form we’ve seen in four PGA Tour starts. At Doral, he topped names like Stricker, Scott, Garcia, Mickelson, G-Mac, Bradley and McIlroy.

But there are four majors each year. There are 50 to 75 players who have a legitimate chance to win. As easy as he made it look in 2000-01, the math isn’t in Woods’ favor.

Think about it this way: If McIlroy won the Masters, Brandt Snedeker the U.S. Open, Lee Westwood the British, and Bradley the PGA, would anyone be surprised? Probably not.

No one in the world is playing as well as Woods right now. But that doesn’t mean he’s a lock to add to his major haul.

I had Tiger Woods winning one major before the year started and I'm not changing now.

When it comes to ranking players or predicting future success directly after a victory, I try not to suffer from SMS – an affliction which has nothing to do with text messages.

Instead, it stands for Short-term Memory Syndrome and too often we suffer from its effects. I've written this before, but it's already happened numerous times this year. When Dustin Johnson won at Kapalua, he was 'primed to win a major'; when Russell Henley won one week later, he was a 'Ryder Cup hopeful.'

All of which brings me to Woods. His wins at Torrey Pines and this past weekend at Doral were vintage TW. That means methodical with a side of boring. Sure, we all remember Woods winning tournaments punctuated by energetic fist pumps, but just as often he cruised into the winner's circle.

These wins should prove he's on top of his game, but at its very core professional golf is a cyclical game, with ups and downs and ebbs and flows on a weekly basis. To watch Tiger win twice already and instantly claim he's prepared to pile up majors is to forget recent history, when his ups came prior to the big ones and his downs came during them.

I'll keep Woods at my original season-opening prediction of one major. I may be wrong, but at least I won't have to be treated for a bad case of SMS.

The first 54 holes at Torrey Pines in his Farmers Insurance Open victory in January featured some of the best driving we’ve ever seen from him. His victory this past week at the WGC-Cadillac Championship was a showcase of classic Tiger putting with some terrific iron play. His short game was sharp in both victories.

These give us reasons to believe we could see another major championship masterpiece in the making, with the possibility Woods puts all those pieces together, in another dominant runaway at next month’s Masters. If he drives it like he did at Torrey Pines and putts like he did at Doral, he’ll blow away the field at Augusta National. The confidence that comes with that could easily lead to two or even three major championship titles this year.

The way Tiger closed out at Torrey Pines and Doral, however, leaves room for skeptics to still wonder how he’ll close a major. Woods gave back four shots over the final six holes at Torrey Pines. He gave back two shots over the final three holes at Doral. The combination of his weekend fades at the U.S. Open and PGA Championship last year feed anyone who still has doubt about Woods winning majors. If Tiger fades on yet another major weekend in this year’s Masters, he might not win one this year.

The bet here is it all comes together well enough at the Masters to give him his 15th major triumph and at the U.S. Open at Merion for his 16th.

Tiger Woods will win one major in 2013, a clinical rout similar to the textbook walkover he enjoyed last week at Doral when all of the cylinders cascade into place flawlessly and the field is reduced to playing the consolation match long before Sunday’s final turn.

Said triumph will occur at Oak Hill, site of this year’s PGA Championship and the type of ballpark that Woods dominated when he was winning majors at a regular clip.

Although Woods has a Grand Slam of green jackets, he hasn’t won the Masters since 2005 and if the club didn’t exactly “Tiger-proof” the venerable Georgia gem in the early 2000s they undoubtedly made it “Tiger tougher.”

Merion Golf Club may also be a less-than-perfect fit for Woods at this year’s U.S. Open. The classic layout will play to just under 7,000 yards with a focus on precision not power, which will expand the field of potential champions and effectively narrow Woods’ chances.

And Muirfield, site of this year’s British Open, is always a great unknown that demands a bit of luck as well as copious amounts of skill (Woods shot a third-round 81 at Muirfield at the 2002 Open in a horrific gale).

Which brings us to Oak Hill, where, it should be pointed out, Jack Nicklaus collected major No. 17 in 1980 and where Woods will land No. 15.

I’ll jump on the humongous bandwagon, and won’t think twice about it.

Woods said himself last week that he doesn’t want to be as good as he was in 2000; he wants to be better. I don’t believe it’s possible for him to be better than he was 13 years ago, but he’s closer to that now than he has been at any point over the past four years. That type of form is easily good enough to win two majors.

Another comment Woods made Sunday after winning the WGC-Cadillac Championship was that he last played this well at the Farmers Insurance Open. I know such thoughts are in his competitive DNA, but he played better at Doral. Much better. The 27 birdies and 100 total putts show Woods was in complete control of his game.

The Masters is the obvious choice for Woods to pick up one major this year, especially since his putting seems to be in top shape. Many are saying Merion’s layout will not suit Woods’ pursuit of another U.S. Open. I don’t necessarily agree. After all, he has won a major by hitting 4-iron off the tee. But let’s say he doesn’t win.

The British Open is the second major Woods will win. He finished six back when the Open was at Muirfield in 2002 – Ernie Els won in a four-way playoff. That week’s performance didn’t please Woods, but he’s returning to a place he admires and believes is a fair test.

Woods will collect his first claret jug since 2006 and the major tally will be 16 by year’s end.