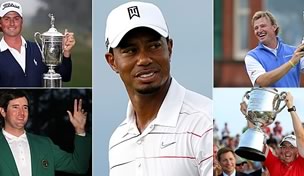 The 2013 PGA Tour season is almost under way in Kapalua, Hawaii, but it's never too late to start thinking about the majors. In this Punch Shot, GolfChannel.com writers weigh in with their predictions on which players will hoist major trophies this season.

Picking major championship winners this early isn’t quite as foolhardy as playing darts in the dark, but it’s close. Here goes anyway:

The Masters: Rory McIlroy. The boy wonder had the 54-hole lead at Augusta National in 2011, and he’s a much more polished player now. He hits the ball long and high, and his putter can glow red hot when he gets a sniff of the lead in a major. He’s just 23, but he isn’t lacking course knowledge at Augusta National. He will be playing in his fifth Masters this year.

The U.S. Open: Tiger Woods. Merion won’t be overpowered, and that’s just fine with Woods. He prefers the conservative approach in the game’s biggest events, and he’ll be quite comfortable navigating his way around this historic venue with 3-woods and irons off tees. Bobby Jones, Ben Hogan and Lee Trevino won at Merion. So will Woods.

British Open: Ian Poulter. With three top-10s in majors last year, and with his inspiring performance at the Ryder Cup, Poulter showed his determination to lift his game in big moments. He’ll lift the claret jug at Muirfield this year.

PGA Championship: Luke Donald. We don’t always give the Englishman his due, in part because he has never won a major, but he goes about his business nobly just the same. A wonderful putter and an equally wonderful attitude helps Donald break through to win at Oak Hill.

Masters: Rory McIlroy. Two years ago, he had a four-shot lead before a Sunday 80. A year ago, he was ill-prepared after a month-long layoff and tied for 40th. This is the year the world No. 1 finally pulls it together and wins the third leg of the career Grand Slam.

U.S. Open: Luke Donald. A claustrophobic, short layout such as Merion should be a perfect fit for Donald, one of the steadiest players in the game. He hasn’t finished worse than third in the Tour’s strokes gained-putting statistic since 2007 – at some point, his stellar short game has to show up on a major stage.

British Open: Tiger Woods. The Open represents Woods’ best chance to win a major because he doesn’t have to be perfect. His record in golf’s oldest championship is outstanding; in 16 career starts, he has 13 top-25s, eight top10s, a pair of third-place finishes and, of course, three victories. Plus, he would have been a factor at Muirfield in 2002 if not for a Saturday 81 in terrible conditions.

PGA Championship: Keegan Bradley. OK, so the sample size is small, but Bradley hasn’t finished worse than T-3 in two starts at the PGA Championship, including a victory in 2011 at Atlanta Athletic Club. A long-and-straight hitter should prevail at Oak Hill, and few players in the game are as brawny as Bradley. He’s ready to break through once again – belly putter and all.

Usually when I'm asked to pick major winners so far in advance, I'll answer the question with a few questions of my own: What's the weather going to be like? How is the course playing? Which players are in form entering each one?

It might be easier predicting answers to each of those queries than predicting this year's major champions months in advance, but let's give it a whirl anyway...

Masters: Adam Scott. The golf gods don't owe him anything after last year's loss at Lytham; that was all his own undoing. But the Aussie is too good to remain winless in majors for too long. Only question is whether he'll be using a belly putter or a short stick when it happens.

Open Championship: Tiger Woods. This used to be an inarguable fact: Woods is the world's greatest links player. After a few down years overseas, that can now be debated, but he still has the knowledge and talent to thrive on a fast, firm setup.

PGA Championship: Graeme McDowell. After his 2010 U.S. Open win, I thought G-Mac may have been the classic case of a guy who got his major, then relaxed. Instead, the opposite is true. He's driven, inspired and – most importantly – has the game needed to win a few more of 'em.

Masters: Give us McIlroy in April because he has too much game and karma can’t be that indifferent to his painful history at Augusta National. Forget about that Sunday meltdown in ’11 and weekend rounds of 77-76 last year, the Ulsterman is poised to move one step closer to the career Grand Slam next spring.

U.S. Open: It’s been more than 30 years since the national championship was played at Merion and the under card, new technology vs. classic architecture, will be almost as intriguing as the champion, who will be Rickie Fowler, the star of 2009 U.S. Walker Cup team when it was played at Merion.

PGA Championship: Tiger Woods will get off the Grand Slam schneid and it seems apropos that he will do so at “Glory’s Last Shot.” Four of Woods’ 14 majors have been won at the PGA and Oak Hill should be a perfect fit for the new and improved swing.