Punch shot: Will McIlroy regain his form by the Masters? 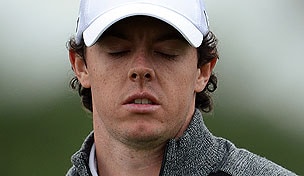 Rory McIlroy may be the No. 1-ranked player in the world, but not if you go by his recent form. His 2013 season has consisted of a missed cut in Abu Dhabi, a first-round exit in the WGC-Accenture Match Play Championship and a mid-second-round withdrawal at the Honda Classic. Our writers weigh in on whether they think he'll regain his form by The Masters.

Much can change between now and April 11, of course. Maybe he’ll grow more comfortable with his new Nike equipment. Maybe he’ll fix that flaw in his takeaway.

But alas, the more likely scenario is that when McIlroy pegs it for the first round of the Masters, he will lack the precision required to compete at Augusta National. In three starts we have seen little to convince us otherwise. He has eight, maybe six, more competitive rounds to figure it out.

Rory will win – and win big – once again. But for that we’ll need to wait till summer.

Is this a rerun? Because I could swear I’ve seen this show before – and I know it has a happy ending.

What I saw was a player who was seriously struggling. McIlroy shot a 79 that day – light years from the cut line – and I truly believed he was in for some long-term problems that could hamper his game for a while.

Fast-forward two months, and Rory was cruising around Kiawah in historic fashion, lapping the field in an eight-stroke PGA Championship victory. Moral of the story: It’s always darkest before the dawn. Or something like that.

Actually the real moral of the story is that we shouldn’t be so quick to diagnose his issues as being ones that will hold him back for a long time. McIlroy is never going to be Tiger Woods of the same age – which is to say, a player who either wins or finishes in the top 10 every week. In that sense, he’s more like Phil Mickelson. Yes, he will miss his share of cuts, but he will also turn things around quicker than most others. In some respects, that makes him even more interesting. As Forrest Gump might say about Rory: You never know what you’re gonna get.

Toss in the fact that I’ve got Jack Nicklaus on my side maintaining that McIlroy will be ready for Augusta, and I’m feeling pretty good about those chances. After all, I’ve seen this show before. I know how it ends.

Rory McIlroy will get this fixed, but it’s difficult to see it happening in time to rekindle his confidence before the Masters.

Something’s wrong, and I’m not sure a dentist can fix it.

McIlroy was described as near tears walking to his car after plunking three balls in the water over his first nine holes and withdrawing Friday morning at the Honda Classic. We aren’t quite certain what the source of his pain really is. Maybe a pair of pliers is all that’s needed to remove the source of the trouble. Maybe not.

If we learned anything last Sunday at the Honda Classic, it’s how quickly a lost player can find himself. Michael Thompson went from dead last to winner in one start. If he can do it, McIlroy can, too, but there’s a difference between PGA National and Augusta National. You don’t go to the Masters looking for your swing. That leaves McIlroy the WGC-Cadillac Championship and the Shell Houston Open to work out what’s ailing him. He will work this out, but they won’t be pushing back the Masters waiting for him to do so.

So we are to believe that between now and the time he motors down Magnolia Lane, Rory McIlroy will be unable to find a reliable driver-golf ball combination or a modicum of confidence?

Chicken Littles would have you believe that the Ulsterman has played his way from alpha male to afterthought in three wildly abbreviated starts in 2013 and will be a non-story at the Masters, but that is simply not the case.

This is the same player who led by four strokes through three rounds at the 2011 Masters, lost his swing somewhere around Butler Cabin on Sunday on his way to a closing 80, and two starts later won the  U.S. Open by eight strokes.

So forgive us if a rocky start and a bag full of new sticks doesn’t exactly send us pining for a time when McIlroy was on cruise control, because that day never existed.

McIlroy will rebound from his current slide and find his Masters mojo in time to contend at the year’s first major, because that’s what he always does, just check his record.

I was willing to discount the opening missed cut at Abu Dhabi. I even felt like the loss to friend Shane Lowry at Dove Mountain wasn’t reason to reach for the panic button. After everything that happened at the Honda Classic, though, I now have serious questions about Rory McIlroy’s game – at least in the short term.

For those expecting the Ulsterman to magically find his form just as the azaleas bloom, keep in mind he hasn’t exactly been a model of consistency in the majors of late. Outside of his win at Kiawah, McIlroy has only one other top-30 finish in a major since his romp at Congressional (a tie for 25th at the 2011 British Open). And that was pre-club controversy, and definitely pre-toothache.

Now with (likely) only two starts left until McIlroy rides down Magnolia Lane, we still have more questions than answers. For me, the biggest of those questions surrounds what I’ve seen of his on-course game – specifically, an inability to control approach shots. Heading to Augusta National, where the difference between a good and a bad iron shot into nuanced greens can be measured in feet, not yards, I fear the 23-year-old’s inconsistency will cost him. Regardless of world ranking, ANGC is no place to try to find your swing.

Do I think he’ll ultimately regain the form that helped him land a pair of majors by age 23? I do. But do I think he’ll don the green jacket at the close of this season’s first major? At this point, I do not.