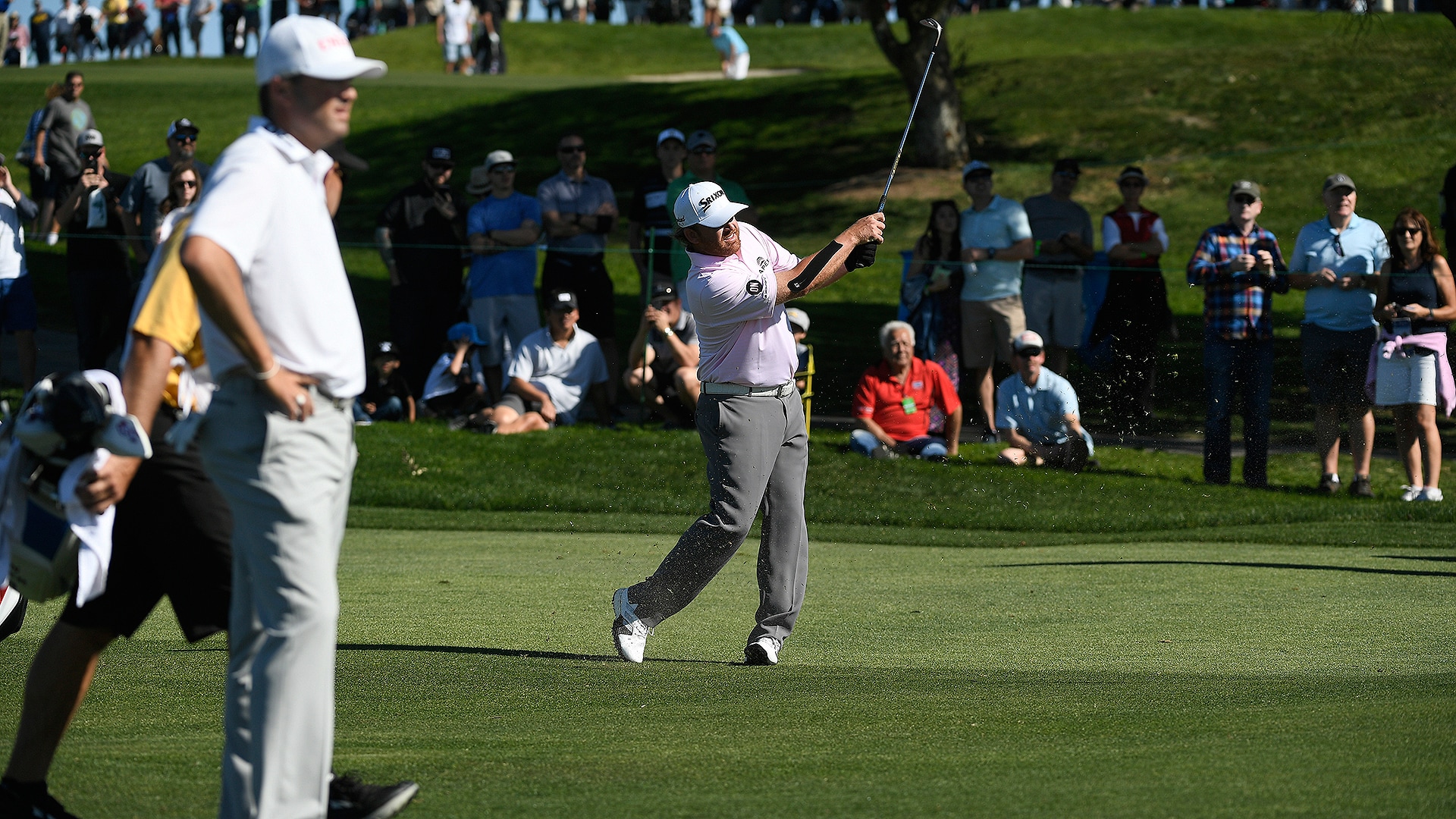 So when traffic on the PGA Tour slows like rush hour on the Brooklyn-Queens Expressway, fans can lay on their horns, like New Yorkers do, to vent at a problem that continues to plague the game.

So when a player like J.B. Holmes chooses to become a one-man traffic jam, as he did in the 18th fairway Sunday at the end of the Farmers Insurance Open, fans can express their frustration.

Or maybe fans should just start booing when play slows down.

Or get creative and serenade slow players with a mocking variation of the Pointer Sisters hit song from the ‘80s:

I don’t want a man with a slow hand

I want a player in a heated rush

Yeah, OK, these are not serious proposals as solutions for the kind of slow play Holmes was guilty of at Torrey Pines. Still, the furor he created taking 4 minutes and 10 seconds to decide to fly the white flag and lay up appears to call for some extreme measures.

The “honking horn” app and other proposals offered here are intentionally over the top, designed to make a couple serious points:

1. Fans can’t depend on the PGA Tour to do anything serious about slow play, and so any real solution needs to start by changing the Tour’s attitude toward the issue.

We saw a social media mob take up pitchforks in a public-shaming campaign on Sunday. Holmes got lambasted, not only for his slow play, but for the effect his lack of courtesy may have had on playing partners also trying to win.

The former No. 1 applied some pressure by boldly weighing in, taking Holmes to task. Donald served a higher purpose by daring to single out a fellow player.

“Last group was over a hole behind, we can all blame JB,” Donald tweeted.

Donald didn’t stop after calling out Holmes. He also called out the rules officials.

“They needed to step in a while ago,” he tweeted.

Mark Calcavecchia, the 13-time PGA Tour winner and three-time PGA Tour Champions winner, wielded a surgeon’s scalpel pointing out that Holmes’ conduct was as much a violation of the spirit of the game as it was any rule.

It should be acknowledged that slow play is a complex problem, and it can’t truly be solved, not with 156- and 144-player fields, not with limited daylight, not with the fast greens you get in PGA Tour events and not with the wind that periodically complicates pace of play, as it did Sunday at Torrey Pines.

But that doesn’t mean pace of play can’t be significantly improved, if there is a real will inside the PGA Tour to do so. That won’t happen until the Tour takes it more seriously. When commissioner Jay Monahan revealed last year that a “comprehensive pace-of-play review” was under way, there was hope, but we’ve heard nothing since.

The one-stroke penalty PGA Tour officials assessed at the Zurich Classic last year is the only slow-play penalty issued in the last 23 years. That’s all you need to know about how seriously they take it.

There’s an old saying: First we make our habits, then our habits make us.

That’s how this changes, with the PGA Tour changing player habits.

There are a lot of factors contributing to slow play, and the Tour’s lack of enforcement of its own rules ranks high on the list.

The problem is that sloths and turtles on Tour know how to circumvent the slow-play rules (40 seconds to play a shot, with certain exceptions when playing first, when 60 seconds is permitted). The sloths and turtles also know they get warnings before a penalty. They know how to speed up when they are on the clock, then slow back down when they’re off it.

Obviously, PGA Tour officials let a lot of “bad times” go unsanctioned. How else do you explain one penalty in two decades?

It would be great if the PGA Tour would hire rules officials to time every group. That would be the ideal enforcement effort, as effective as having a State Patrol car in every driver’s rearview mirror. It’s not practical, though.

There are answers in technology.

Monahan hinted as much last year when he revealed the Tour’s Shotlink dashboard records “time par” averages for every player. If that’s a reliable metric, find a way to use it. Identify the sloths and turtles and post time par averages with other public stats.

Also, create a different set of rules for the 30 or so slowest players in any field, based on their time-par average. Tell the sloths and turtles they should assume they are on the clock at the first tee, that they could be timed (as individuals) without notice, and that they won’t be warned with a first “bad time.” They will go directly to a one-stroke penalty and $5,000 fine with their first violation.

Put sloths and turtles on notice.

Use Shotlink’s technology to help police them.

And then start enforcing the rules, start assessing penalty shots.

It’s all about changing habits, but there has to be discretion and allowances, when players are in contention on Sundays. This is why slow play is a complex problem, because it’s different on the back nine on Sundays. There are going to be those extraordinary circumstances when a contender like Jordan Spieth is getting a complicated drop at Royal Birkdale, or Tiger Woods is figuring out how to hole a circuitous chip at the 16th at Augusta National or Phil Mickelson sends his caddie 70 yards ahead at the last hole to tend the flagstick at the Farmers Insurance Open in a bid to hole out from the fairway and force a playoff (that one didn’t work out, but it was cool).

The hope here is that the PGA Tour can change a player’s habits before he unnecessarily creates a traffic jam when he’s in contention late on a Sunday.

Honk your horn if you agree.