The new PGA Tour schedule felt like a real page-turner this year.

It was crafted with classic and popular appeal, part Hemingway, in the economy of its storytelling, and part J.K. Rowling, in its breathless pacing, in how it moved from one magical plot twist to another.

Or, in another analogy, the heart of the PGA Tour season felt more like binge-worthy TV viewing than it ever has, with fewer duds as episodes to wade through between crescendos of drama.

In either case, hats off to PGA Tour commissioner Jay Monahan, who delivered a more compellingly packaged product.

Four majors in four months? With The Players back in front of the majors? With the tightened-up and more consumer-friendly FedExCup Playoffs as the last act? With World Golf Championships sprinkled in that hectic mix?

It felt as if the Tour added more big events to this year’s schedule, when it was actually shrinking the spring/summer schedule, to better showcase the big events in a shorter but more meaningful spring/summer window. There was a little bit of genius in that.

Yeah, it really felt like a “major championship season.” That ought to be a new brand. That’s the new commodity Monahan created with four majors in four months, as well as The Players and playoffs to bookend.

Yes, it might have been nice to stretch the season one more week, to keep playing into the first weekend of the college football season, if only to get a Labor Day finish. The holiday seems tailor-made for a farewell, big-bang Tour finish, on a day that would accommodate golf’s needs, but Rory McIlroy got plenty of attention with his entertaining Tour Championship victory last weekend.

Speaking of McIlroy, apologies to him and Justin Rose and other players who believe this new schedule is too breakneck, too crammed tight and too focused on majors.

Avoiding football’s long shadow and creating a championship season may have been the primary goals of the new schedule but the added benefit of top players playing more is certainly a pleasant byproduct.

From a player’s perspective, yeah, there are challenges getting used to the new compact spring/summer.

There’s less time to rebound from the Masters and prepare for the next major.

“It’s too condensed,” Justin Rose said after The Open. “As a professional, in terms of trying to peak for something, the process that’s involved in trying to do that can be detailed, and it can be longer than a month.”

From a fan’s perspective, the overall season didn’t feel too condensed.

It felt less diluted, less drawn out, less like watching J.B. Holmes get ready for his next big shot.

Four majors in four months created a “major championship season” in a way that felt fresh and new.

From Tiger Woods winning the Masters, to Brooks Koepka taking the PGA Championship, and from Gary Woodland winning the U.S. Open to Shane Lowry taking The Open, there really was a “season” of majors that linked one to the others in a more profound way.

There was a dynamic flow that makes them better than horse racing’s Triple Crown (Plus One).

And to Rose’s point, is it really unreasonable to prepare for four majors in four months? 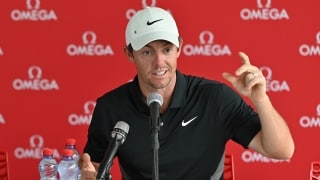 Rory McIlroy isn't dismissing his 2019 achievements just because he failed to win a major. He also isn't sure he's happy with golf's revamped schedule.

“If the narrative becomes majors are the only important thing in golf, that’s a dangerous narrative to run with, because then fans are not going to care about the other 48 weeks of the year,” McIlroy said. “

But then again, maybe 48 weeks is too long to care.

Maybe everything around the game is more relevant because that “major championship season” is even more dynamically connected now.