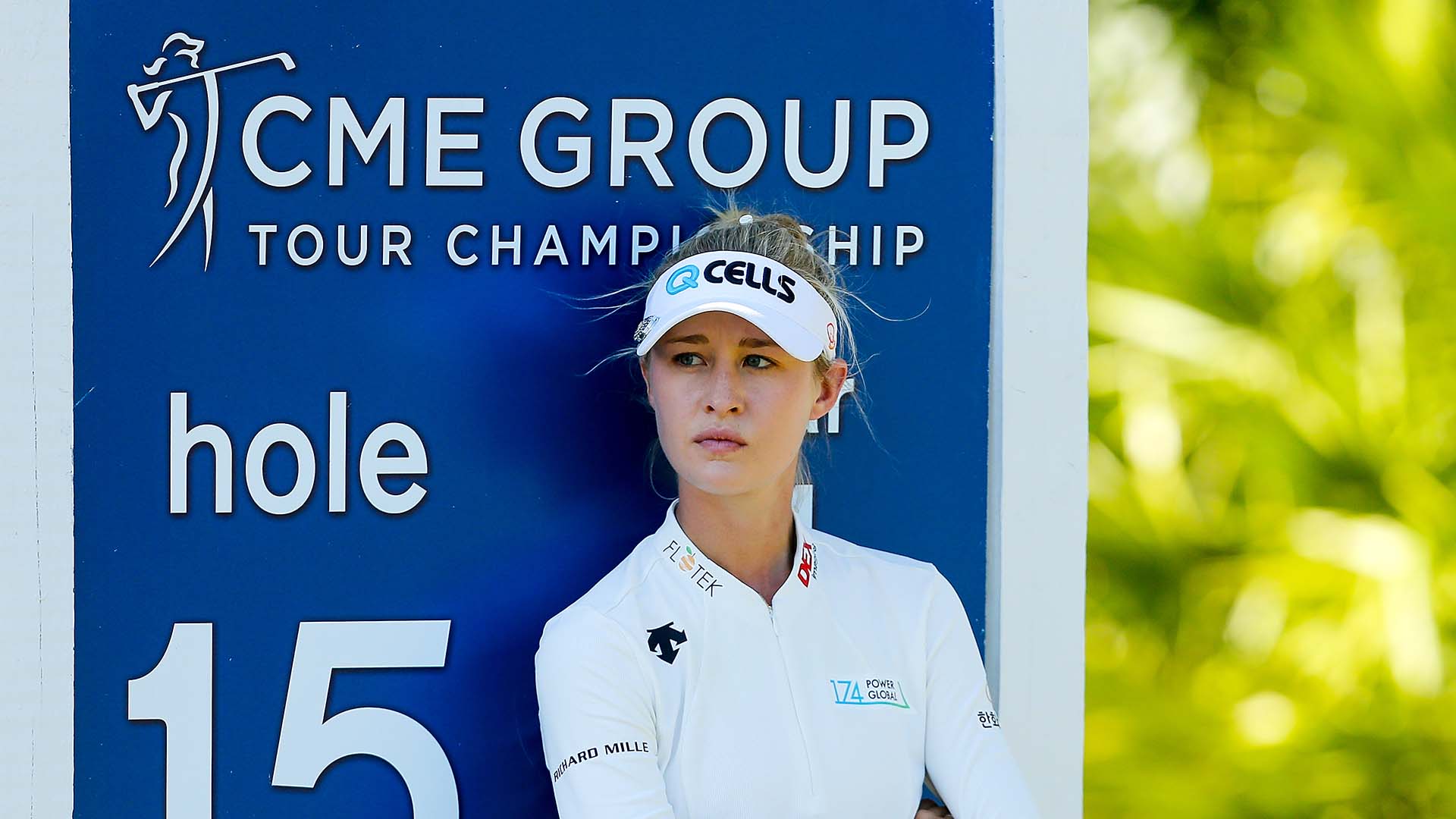 Every LPGA player in Naples, Florida, this week ought to seek out CME Group CEO Terry Duffy and give him a hug.

They ought to thank him for seriously upping the ante in the women’s game, if they haven’t already.

And with those hugs, they should consider offering some helpful suggestions to enhance his support.

But let’s focus on the gratitude first.

The 60 players who qualified for the CME Group Tour Championship are playing for a $5 million purse at Tiburon Golf Club. That’s the second largest purse in women’s golf, behind the U.S. Women’s Open ($5.5 million), with the CME field less than half the size of the year’s most coveted major championship.

More importantly, the winner will take home $1.5 million this week, the largest first-place check in the history of women’s golf, $500,000 more than Jeongeun Lee6 took home winning the U.S. Women’s Open back in June.

How good is that?

The $1.5 million paycheck is more than the winner took home in 32 of 46 PGA Tour events in the 2019 wraparound season.

Duffy heartened women with his words as much as he did with his financing.

“I’m a big proponent of equality,” Duffy said. “I have a very balanced management team between women and men. I think it’s best generated from those ideas, and I make sure there is equal pay for equal jobs. So, I’m very much in favor of that.”

Duffy raised the bar in the women’s game, giving hope to players who struggle just to stay on tour, because barely cracking the top 100 on the money list doesn’t do much after expenses. That’s a sad fact of tour life, when you’re among the 100 best in the world and you might still be living at home with your parents or requiring a roommate to make ends meet.

Raising the stakes like Duffy did should influence thinking through the LPGA’s sponsorship ranks.

So now about those helpful suggestions.

Duffy’s revamped format isn’t perfect as the culmination of something the LPGA fan base has come to understand as a season-long competition, but let’s get this straight: Duffy’s commitment to the women’s game is far more important than the format in play this week. This isn’t a major championship. There aren’t historic, foundational values requiring protection. This is the tour’s rich dessert.

Whan wasn’t bidding out a new idea for this year’s Tour Championship format in hopes of finding a bigger, better title sponsor to raise a larger profile and purse for his season-ending event.

Duffy brought the idea (and the extra money) to Whan.

Now, instead of 72 players qualifying to play for the Tour Championship trophy and a $500,000 first-place check, and a dozen qualifiers within that field also playing to win the CME Globe’s season-long points competition and $1 million prize, it’s a winner-take-all proposition.

Now, 60 qualifiers who made it to Naples are competing for a $5 million purse and $1.5 million first-place check.

The event is much better without points.

It’s much better without fans going cross-eyed trying to keep one eye on head-spinning point projections and one eye on the tournament leaderboard.

Duffy got this simpler construct right.

But there is something lost in the nature of a season-long competition becoming a 60-player free-for-all, something that could be tweaked to make the simple construct even more dramatic.

If there wasn’t this “Race to the CME Globe” history, with players battling for preferred “pole positions” going into the final event, the free-for-all format might not be as big a deal. But there is that history, that expectation built into any evolution of the CME Globe.

With a historic paycheck hanging in the balance, there’s a sense something grandly different should decide who wins it.

Here’s hoping the players themselves can help Duffy tweak the format to make the season-ending event feel more like a dynamic playoff finish.

Make it a season-long qualifying competition for the top 32 players on the year.

Play the first 54 holes to a cut to the low 16 players for the weekend, with a playoff late Friday afternoon, if required, to make it an even 16.

Wipe out the scores to start the weekend, like they did in those LPGA Playoffs.

And cut to the low eight players going into Sunday’s finale, with the scores wiped clean yet again, and with another playoff, if required, to make it an even eight players after Saturday.

Annika Sorenstam, Lorena Ochoa and Julieta Granada won the three years the LPGA staged its playoffs. There were two dominant champions rising to the occasion in that format with room still for a Cinderella story.

There will be flaws in any attempt to create playoffs in golf, with challenges trying to reward season-long consistency and a dynamic playoff finish. How do you fairly strike the right balance? The PGA Tour has been tweaking its playoff for 13 years.

Duffy’s company deals with options and futures exchanges as a global market company. He’s built to make dollars and sense of assets. Whether he tweaks his format or not, Duffy’s giving the LPGA a richer future. That’s something important to celebrate this week no matter who wins.