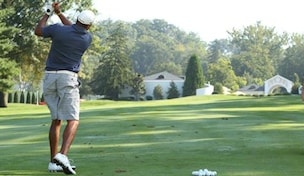 I have golfers often ask me why they don't hit the ball as well on the course as they do on the range.

I think it is easier to get in the groove on the range hitting ball after ball to the same target and with the same club.

If you want to perform better on the course, consider practicing like you play. This means never hitting the same shot twice in a row, whether you are at the range or the short-game area.

The concept is called random practice and it will improve your on-course performance.

At the club where I work, we have target greens every 50 yards from 50 yards to 250 yards. After I have loosened up, I will select clubs for three of the target greens.

Another strategy is to play golf on the range. Pretend that you are playing your favorite course. Hit a tee shot and then based on the result, play an approach shot into a green as you would on the course. If I hit the approach close, I might give myself a birdie. If I miss the green, I'll score a bogey.

When working on my short game, I like to play a game I call scatter.

In our short-game area, we always have nine holes with numbered flags. In scatter, I have five golf balls, each numbered from one to five. I toss the balls in the air and then play them as they lie.

I'll play ball No. 1 to hole No. 1, ball No. 2 to hole No. 2, etc., keeping track of how many I get up and down. After I have played all five, I do it again from a different location, sometimes in the rough or sometimes on a downhill lie, so that it's different every time.

Try it and keep score. Keep track of up and downs or keep the total score. Another way to practice your chipping and putting is to use one ball and play to nine different holes keeping score as you go.

One of my favorite putting games is to set up three tees three feet from the hole around three different holes. I will begin hitting a putt at hole No. 1. If I make it, I move to hole No. 2 and then No. 3.

Once I have made one putt at each hole, I then return to No. 1 attempting a second putt at that hole.

As long as you keep making putts, continue to move forward. The goal is to make nine putts in a row, each putt at a different hole and with a different break. If you make nine in a row, move the tees to four feet and try again.

Random practice is more similar to playing golf than hitting ball after ball with the same club or hitting 25 putts in a row from three feet. Try this type of practice and see if it will improve your on-course performance.