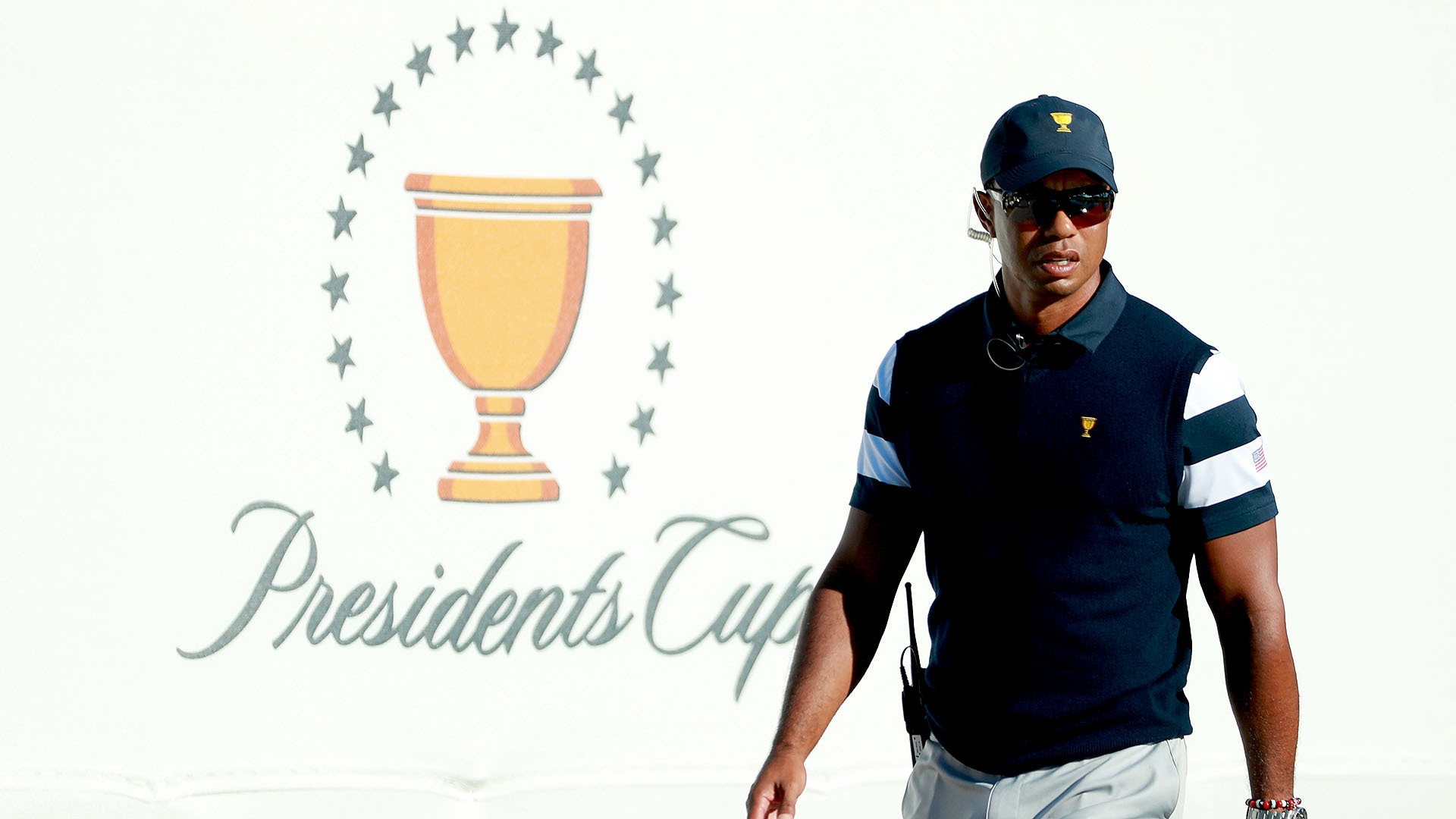 Gone are the days when Tiger Woods needs to suit up for all five sessions of a U.S. team competition.

The Americans now are too deep.

Woods’ 43-year-old body is too brittle.

And this year, at least, Woods has too many other responsibilities. For the first time since Hale Irwin in 1994, the U.S. Presidents Cup team will have a playing captain. That wrinkle adds some much-needed intrigue to what historically has been a lopsided affair, but it also creates a series of difficult decisions for Woods.

The first: When to play? The first two rounds of match play are contested over two days, before a doubleheader of fourballs and foursomes on Saturday that leads into Sunday singles. The one-session-a-day format early would allow Woods to play unencumbered before fully turning his attention to putting his charges in the best position to win the cup for the 11th time in 13 chances. Woods has also mentioned, on a few occasions, the new rule that states a player needs only to compete in one team session before final-round singles play. That suggests Woods might already be thinking of taking on a light workload.

Which brings us to the second question: With whom to play?

The co-winningest player in PGA Tour history hasn’t been nearly as dominant when forced to partner up. During a match-play career that dates to the 1997 Ryder Cup, Woods is only 29-35-2 in team competition. His partners have ranged from the plodding (Jim Furyk) to the powerful (Dustin Johnson), from the mild-mannered (Charles Howell III) to the mischievous (Phil Mickelson). Last year at the Ryder Cup, Woods’ partners were brash (Patrick Reed) and brainy (Bryson DeChambeau), but what they had in common were the losses – Tiger went 0-3 with the pair, setting the tone in what was a royal thumping in Paris.

What makes Woods’ 2019 roster so unique is that seven players are 30 or younger. For the past few years they’ve been living out their childhood dream of playing against him in tournaments, but now there’s the possibility of playing with him, as partners, in what might be a once-in-a-lifetime opportunity. They’d all be desperate to deliver not just for their captain, but also their boyhood idol.

Some are better fits than others, of course, so here’s our unofficial ranking of potential Tiger partners with the matches now less than a month away:

1. Justin Thomas: Granted, everyone wearing red, white and blue will want a piece of Thomas, who led the Tour in birdie average last season and is 6-1-1 in team play across the last two cups. But he’s an ideal partner for Tiger in particular: They share a putting coach (Matt Killen), they’re good friends and they’re frequent practice companions. Thomas is also in the market for a new partner, with both Jordan Spieth and Rickie Fowler left at home.

2. Matt Kuchar: It seems like eons ago, but Woods teamed with Kuchar to go 3-1 at the 2013 Presidents Cup. Though his play of late has been ragged, Kuchar’s steadiness, accuracy and above-average putting is a perfect compliment to Woods’ elite game.

3. Webb Simpson: Like Kuchar, Simpson fits the mold of a classic Tiger Partner: compatible, ego-free and possessing a rock-solid all-around game. Maybe for Woods, Simpson is this generation’s Steve Stricker. They’d be a particularly potent team in foursomes.

4. Patrick Reed: It remains to be seen how Captain America will be welcomed back by the U.S. team, but Woods could ease the transition by partnering with him. They were disastrous together in Paris, but Woods was gassed from the Tour Championship and Reed wasn’t in the best form. That’s not the case anymore, and Reed will be highly motivated to show the rest of the Americans that Woods made the right choice.

5. Xander Schauffele: Remarkably, this will be the first team competition for Schauffele, the No. 9-ranked player in the world, but he has the competitive makeup to do some serious damage at Royal Melbourne. X-Man isn’t scared of the moment, and he makes birdies in bunches. He and Woods make a lot of sense in fourballs.

6. Tony Finau: Perhaps no one on the U.S. side worships Woods like Finau, which cuts both ways in an event like this: He might try too hard to win for his hero, or he could play out of his mind with so much adrenaline and purpose. Finau’s 2-1 record on a claustrophobic Ryder Cup course should ease concerns about how he’ll handle a different test like Royal Melbourne.

7. Patrick Cantlay: This will be the first of many U.S. teams for Cantlay, who is arguably the Americans’ most complete player. Still, it’s a mystery with whom he’ll best team. He’s played a few times with Reed at the Zurich Classic, but a high-octane partnership with Woods could bring out a different side of the normally placid performer.

8. Dustin Johnson: Still recovering from injury and scandal, Woods linked up with DJ at the 2011 Presidents Cup, going 1-2 despite a bevy of firepower. Woods has always been complimentary of DJ’s immense talent, but the world No. 3 could be rusty after offseason knee surgery.

9. Gary Woodland: Chipping and putting are going to be paramount at Royal Melbourne, and those areas aren’t Woodland’s strong suit. Captain Woods would be better served pairing the explosive rookie with the dependable Kuchar.

10. Bryson DeChambeau: If not Woods, then who? Not everyone on the U.S. team can handle DeChambeau’s quirks, but Woods has at least taken an interest in the Mad Scientist’s unique approach to the game. That doesn’t mean they’re a formidable partnership, however, as they were smoked in foursomes at the Ryder Cup. Because the other options are limited, Woods is likely to give him one more chance.

11. Brooks Koepka: Sorry, but in team match play, there’s room for only one alpha.