Avoid misconceptions when you're reading greens 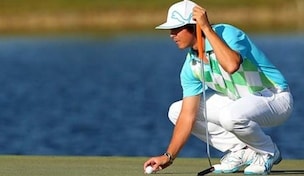 There are an awful lot of putting aids, not to mention grips and putter styles, out there these days for golfers to utilize.

But if you can't tell whether a putt is going to break right to left or left to right, not one of them will help you make more putts.

What can you do to read greens better?

SwingFix instructor George Connor, Director of Instruction at the Academy of Golf and Gillette Ridge Golf Club in Bloomfield, Conn., has some advice that should help you out, and some of it might come as a surprise.

'Almost every week you will hear bad information from television commentators,” Connor said. “Depending on where the tournament is being played, the announcer will continuously point out that putts break toward certain landmarks. You have heard announcers go on about putts breaking toward Downtown Phoenix, the Las Vegas Strip, the valley, the setting sun, water, mountains, etc.

According to Connor, here are some accurate statements about how a ball will break as it rolls across a putting surface:

• 1. Gravity will pull the ball down the slope.

• 2. The grass almost always will grow down the slope, not against it. In very rare cases at the top of a crown on a green you might find a few inches where the grain grows uphill, but this exception occurs only on very slight slopes (less than one percent grade) and only for a matter of inches.

• 3. It is very rare for an entire putting green to be sloped in the same direction, especially on modern courses.

• 4. Landmarks such as Downtown Phoenix, a body of water, mountains, etc., do not have any magnetic pull on golf balls.

Added Connor: 'How and how much a putt breaks as it rolls across the green will become much clearer to you when you start to focus on the determining factors of break and stop listening to folklore about mysterious forces causing a golf ball to do things.'