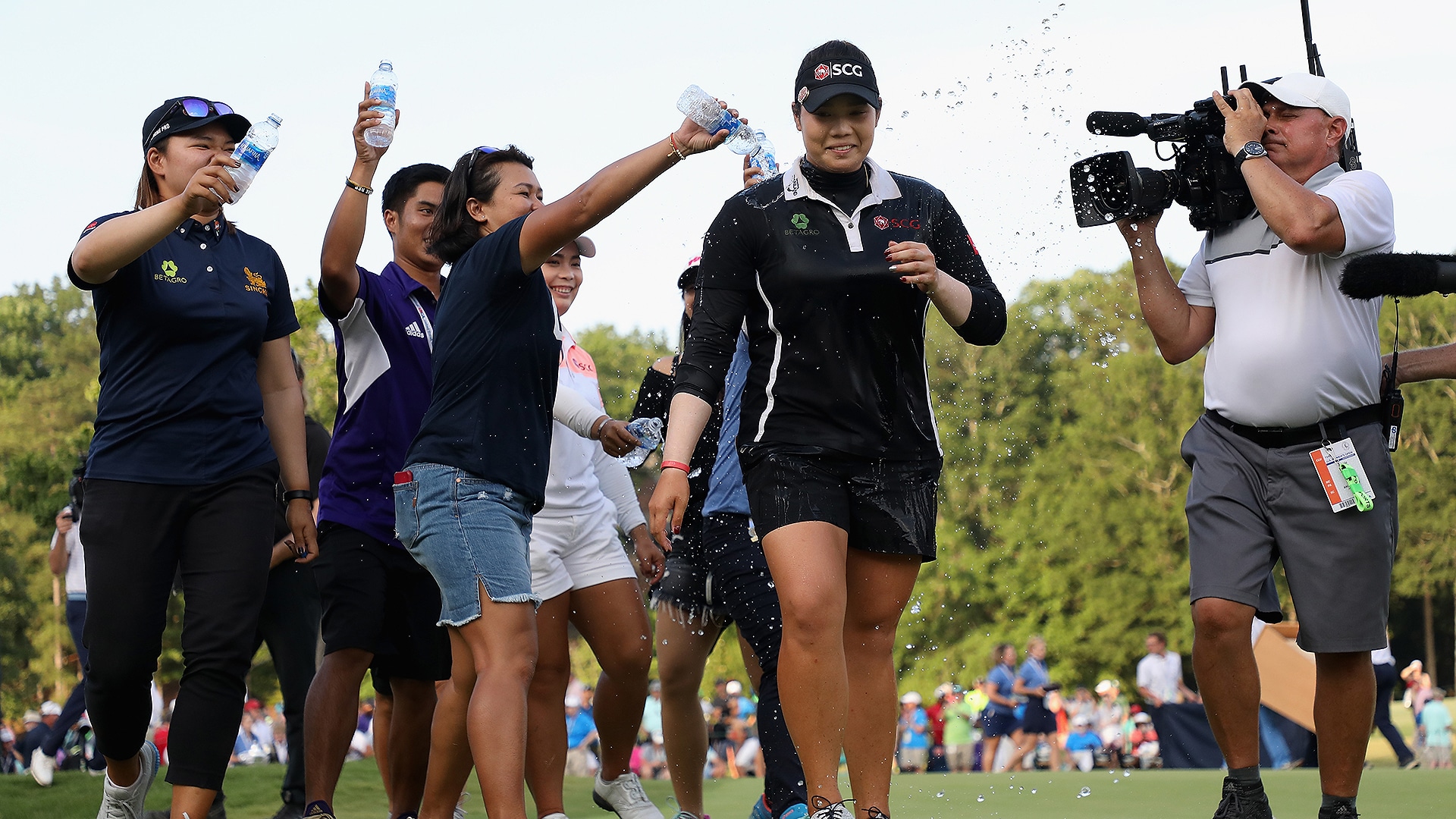 BIRMINGHAM, Ala. - In some of the bleakest moments during Ariya Jutanugarn's back-nine collapse at the U.S. Women's Open, the 22-year-old from Thailand would take a deep breath, smile to herself and think happy thoughts.

The mind tricks weren't working, but she wasn't going to stop trying.

Finally, after an excruciating few hours of golf, the positive vibes came true.

Jutanugarn lost a seven-shot lead on the back nine before prevailing on the fourth hole of a playoff to win at Shoal Creek on Sunday for her second major championship.

She made a nearly perfect bunker shot to within a foot of the cup on the tournament-clinching hole, beating South Korea's Hyo-Joo Kim, who shot a 5-under 67 in the final round to force the playoff.

It was not an easy up-and-down for Jutanugarn, who said she didn't have a particularly good lie in the sand. Somehow, she kept her cool.

''I felt pretty good,'' Jutanugarn said about her mood before the shot. ''I don't know why.''

She felt even better when the ball rolled close enough for an easy putt. A collapse that would have gone down in U.S. Women's Open lore was about to be averted.

Jutanugarn said support from her family and coaches helped her stay positive and come through with her ninth LPGA win.

''I know everything's going to be the same and they're going to love me the same,'' Jutanugarn said.

Jutanugarn started the day with a four-shot lead over Australia's Sarah Jane Smith and looked like she might win easily after opening with a 4 under on the front nine to stretch her lead to seven shots.

But a triple bogey on No. 10 cut the lead to four and rocked her confidence, especially with her 3-wood. She still had a two-shot lead with two holes remaining, but closed with back-to-back bogeys to fall into a playoff after shooting 73.

Jutanugarn and Kim shot 11-under 277 in regulation.

In the end, Jutanugarn's slow-motion collapse set up an emotional victory and her second major win. She also won the Women's British Open in 2016.

The format for the playoff was a two-hole aggregate on 14 and 18, but the players were still tied after the two holes. The format then switched to sudden death, alternating between the same holes.

Kim looked like she might win the two-hole aggregate after making a long birdie putt on 14 while Jutanugarn settled for par. But Kim made bogey - her first of the day - on 18 while Jutanugarn made par again to send the format to sudden death.

On the fourth playoff hole at 18, both players went into greenside bunkers. Kim's shot out of the bunker was decent, but Jutanugarn's was phenomenal, rolling right next to cup and setting up an easy par putt.

Kim missed her putt for par and Jutanugarn tapped in for the win, turning toward her caddie and family for a happy, tearful embrace.

Jutanugarn looked nearly invincible during Saturday's third round when she made her move into the lead with a 67, powering through the soggy Shoal Creek course with ease. It was more of the same for a while Sunday when she extended her lead to seven shots.

But things were about to get rough in a hurry.

Jutanugarn hit her tee shot into the hazard on the 10th and then had a three-putt for a triple bogey. Her confidence shaken, she had another bogey on 12 and the tournament was suddenly much closer than anyone expected.

While Jutanugarn was fading, the 22-year-old Kim was rolling. She made putt after putt to put pressure on Jutanugarn, including a 50-footer on 15 that pulled her within one shot of the lead. Like everyone else, she was shocked she was still in contention.

''Honestly, I didn't really worry too much about it because I just focused on how I was going to play,'' Kim said through a translator. ''It did not really enter my mind that I was going to come that close.''

She couldn't quite complete the comeback, which would have been the biggest in the final round in U.S. Women's Open history.

Smith, a 33-year-old from Australia, had a three-shot lead going into the weekend after back-to-back 67s, but finished the tournament with two straight disappointing rounds. She was in the final group with Jutanugarn, but had a 78 on Sunday to fall into a tie for fifth.