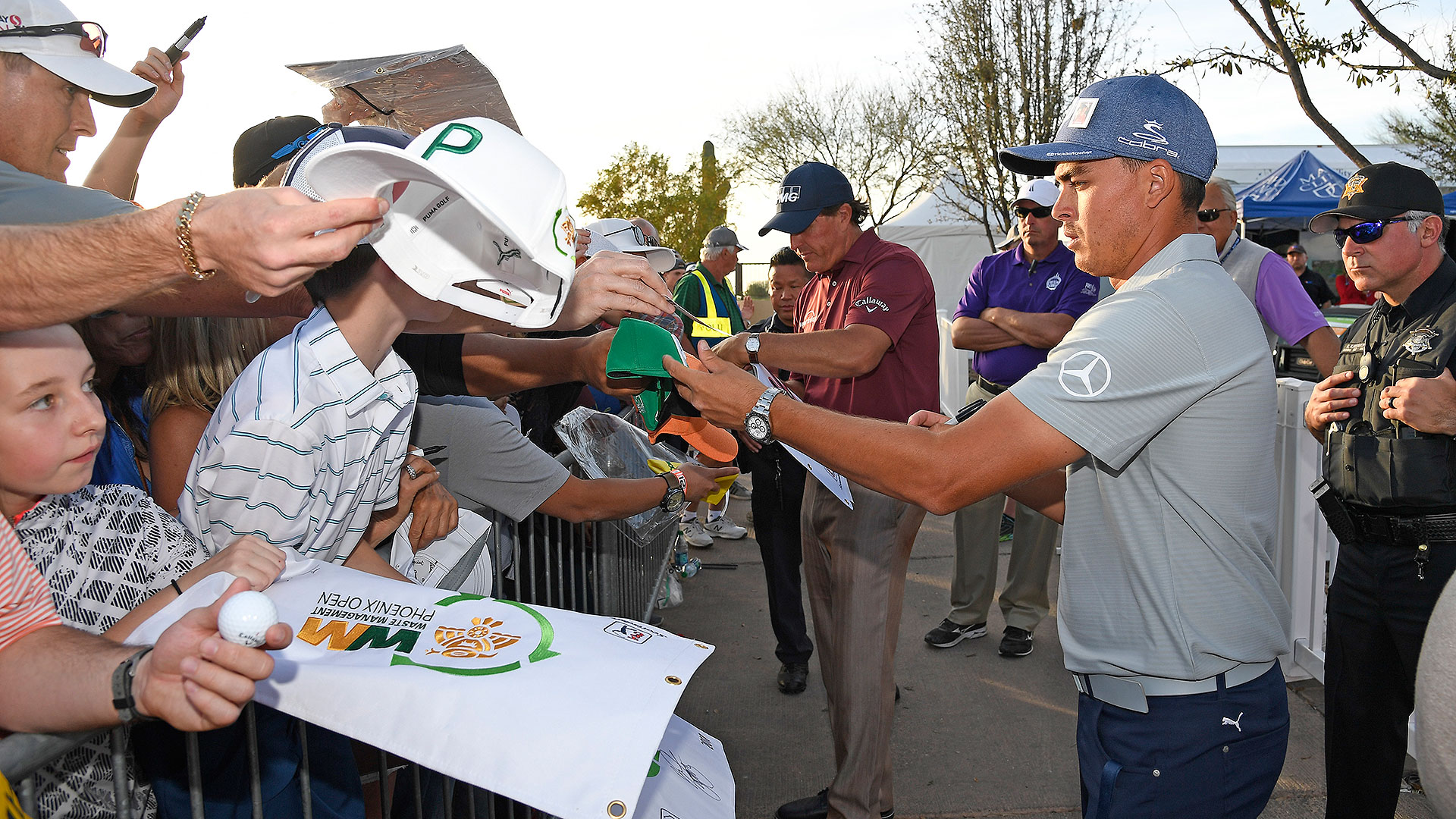 SCOTTSDALE, Ariz. – A few hundred yards behind the 18th green, with hundreds of eager fans clamoring for autographs nearby, Rickie Fowler and Phil Mickelson crossed paths.

Fowler had just finished his interview session with the media after grabbing a share of the lead at 10 under. Mickelson, who made a flurry of late birdies to get within three shots, was about to step to the microphone.

“I’m going to try to get paired with you on Sunday,” Mickelson said with a grin.

There are plenty of big names near the top of the leaderboard at the halfway point of the Waste Management Phoenix Open, but none carries more gravitas than that of Mickelson. A three-time champion at this event, Mickelson basks in the adulation of galleries here each year, just a short drive from his former stomping grounds at Arizona State.

But it’s been five years since his near-59 led to title No. 3, and it’s been nearly that long since his last win in general. Mickelson returned this week to make his record-tying 29th tournament appearance off a missed cut at the CareerBuilder Challenge and a middling performance at the Farmers Insurance Open, with his 25-year run inside the top 50 in the world rankings perilously close to coming to an end.

Suddenly, though, Lefty is once again all smiles at one of his favorite stomping grounds.

That energy was on full display Friday, where Mickelson carded a 6-under 65 to suddenly race into contention at an event where hours before he seemed to be flirting with the cut line. After a bogey on the 12th hole, he reeled off five birdies over his final six holes to reach 7 under and get within reach of both Fowler and Bryson DeChambeau, who are tied at the top.

“I’ve been working hard the last few months of getting the technical aspect down, and it’s been hard for me to kind of transition my focus into play, to have fun and go hit shots and enjoy the day,” Mickelson said. “Today, it kind of turned. Today it kind of flipped a little bit.”

Mickelson dipped his toe in the fountain of youth last fall at the Presidents Cup, but he’s still facing an uphill battle for career win No. 43. DeChambeau wasn’t born when Mickelson won for the first time as a pro in 1993, nor was third-place Daniel Berger. Fowler was barely out of diapers.

“I respect Phil tremendously. He’s been an incredible asset to the game and has done incredible things,” DeChambeau said. “So for him to be a couple behind me is obviously a little different, I’m not used to it.”

It’s a challenge that Mickelson continues to relish, invigorated by the thousands that line the Stadium Course. They’ll be out in full force again during the third round, where the former Sun Devil will once again be the most popular target of the stampeding crowds.

Having conjured a bit of momentum after starting slowly out of the gates in the new year, Mickelson will hope to build upon it under the pressures that only a spot on the leaderboard can provide. And, if all goes according to plan, he might find himself alongside Fowler on the final-round tee sheet.

“I’m happy to be in contention,” Mickelson said. “My goal starting this tournament was just to play two good, solid rounds and get in it for the weekend, and that’s where I’m at. So now I’ll go one step further and see if I can get in that final group on Sunday.”