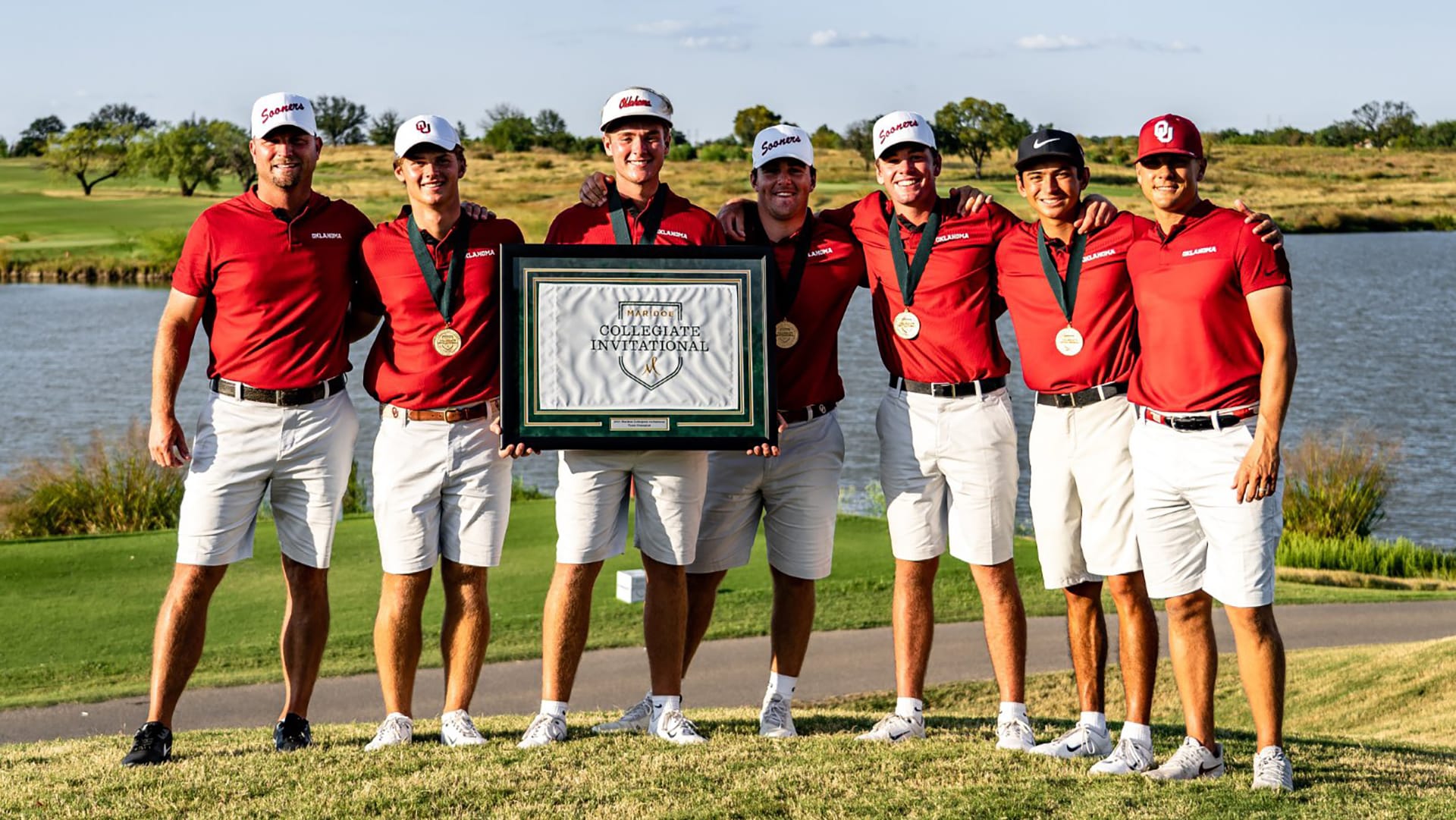 After each spent considerable time at No. 1 in the Golfstat rankings last season, the Sooners and Gamecocks began this fall ranked outside the top 10 by GolfChannel.com, at Nos. 14 and 15, respectively. It was a byproduct of the two programs losing loads of All-American talent, but it’s already clear that both teams were well underrated.

Oklahoma, fresh off a runner-up finish at the season-opening Carmel Cup, took down Texas on the final hole Wednesday to win the Maridoe Collegiate Invitational. Earlier in the day, South Carolina capped off a wire-to-wire victory at the loaded Annika Intercollegiate, besting Duke by seven shots.

“I think you’ve given us all the fuel, Brentley,” Oklahoma head coach Ryan Hybl told this supposed insider on Wednesday evening, live on Golf Central. “You’re always throwing us under the radar, and we like that, we like that role, so keep doing it for us.”

Sorry to disappoint, but the Sooners are no longer under the radar. They entered this new campaign without a trio of All-Americans from their NCAA runner-up team a season ago. Gone were Quade Cummins, Garett Reband and Jonathan Brightwell, who combined with five wins, 59 top-10s and nine All-America nods during their college careers.

But Hybl has reloaded, and fast. Like he did Brightwell two summers ago, he brought in transfer Chris Gotterup from Rutgers. Gotterup tied for 14th two weeks ago at Pebble Beach behind freshmen Stephen Campbell Jr. (T-10) and Drew Goodman (T-6), and medalist Logan McAllister, a senior who is expected to take the reins as the Sooners’ new alpha.

McAllister has a strong running mate in Gotterup, the confident fifth-year Swede who holed the winning par putt in Dallas to cap a final-round comeback over the Longhorns and Arizona State, two top-4 teams in GolfChannel.com’s preseason rankings. Gotterup actually played his last 16 holes without a bogey as Oklahoma shot 7 under, 5 under on Maridoe’s stouter back side, where the Sooners impressively carded just three bogeys as a unit.

The individual race was exciting, coming down to a playoff, where Sun Devils senior Cameron Sisk edged Texas Tech’s Baard Skogen, who hit the flagstick with his second shot from a greenside bunker at No. 18 after leaving the first in the sand. Sisk earned an exemption into this fall’s Houston Open with the win. But the team race wasn’t void of fireworks.

Texas senior Cole Hammer and junior Mason Nome each made crucial birdies late, Hammer on the par-4 finishing hole (with his broomstick) and Nome at No. 16. Meanwhile, Gotterup and teammate Patrick Welch notched birdies at Nos. 16 and 18, respectively.

Gotterup’s bird was part of a two-shot swing at the final par-5, as Longhorns senior Parker Coody hit a shot into a bush and made bogey. At that point, both teams were tied, which is where they stayed until the final moments. Coody piped a drive down the middle but failed to hit the green with wedge and couldn’t get up and down. Gotterup calmly rolled in his short putt to give Oklahoma the statement victory.

“We’re young, we’re hungry, we’ve got a lot to prove,” Hybl said. “These guys are just working their butts off. It’s early in the year, we know that, but we’re loving what we’re seeing out of our guys right now.” 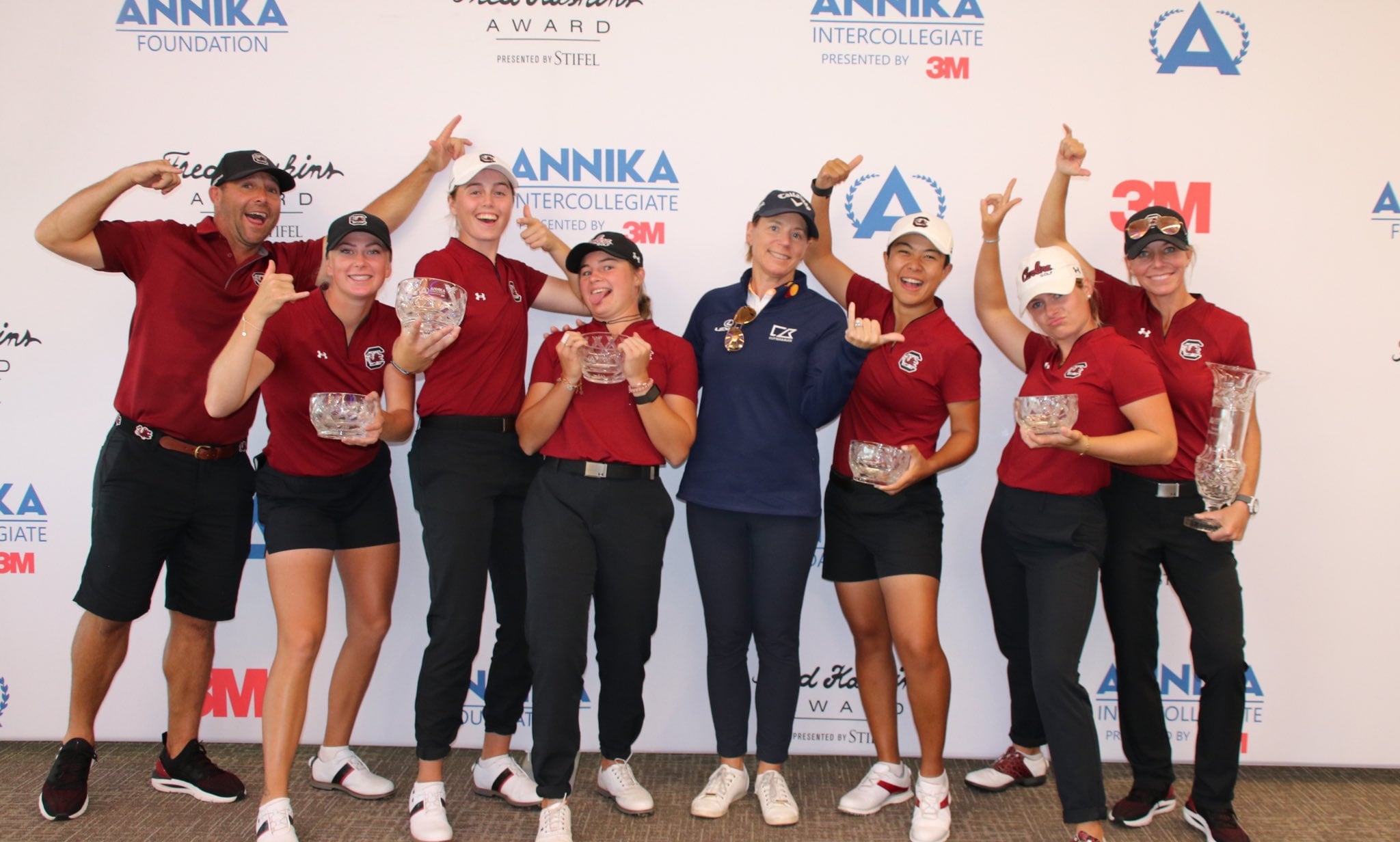 Gamecocks head coach Kalen Anderson is feeling the same way. South Carolina was the top-ranked team in the country for much of the season until barely surviving regionals and then failing to make match play at the NCAA Championship.

“Such a great year and then had distractions at a really inopportune time, and it was hard to overcome,” Anderson said. “We just didn’t handle it well. … There is a little motivation behind what happened last year, but most of them are all new.”

The new-look Gamecocks were eager and loose out of the gates at the Annika, arguably the toughest field of the regular season featuring eight teams ranked ahead of South Carolina by GolfChannel.com, including six top-10 squads. They jumped out to a seven-shot lead after Day 1 as Darling posted a bogey-free 66.

Darling followed with two early double bogeys in the second round, but she recovered nicely, and he tournament-leading 17 birdies helped her finish second individually at 11 under, just a shot back of Ole Miss senior Julia Johnson.

“She can be No. 1 in the world,” Anderson said of the Scottish freshman. “She’s unbelievable.”

Anudit, Claisse and Rydqvist all added top-20 finishes for the Gamecocks, who didn’t even have Kirner in the lineup because of illness, as they clipped Duke by seven at 14 under. Wake Forest, Alabama and Texas rounded out the top 5 while South Carolina's SEC rivals Ole Miss and LSU finished 21 and 35 shots off the pace, respectively.

“We’re extremely excited to come out this way,” Anderson said. “We did turn over four players and we do have four new players … so there is some youth there, there is a learning curve. But we came out and executed really, really well, and I think it showcases the talent we have and how good we can be. We can build off this and we’re only going to get better. We are going to have some bumps in the road – I don’t know the expectations for us to go out and blitz the field every time we play – there’s a lot to improve on and they’re not always going to execute.

“But certainly, this was a good way for them to build confidence, a good foundation to build off, to show them that they are one of the best teams in the country.” 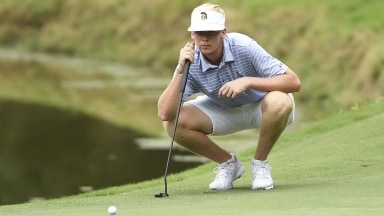 Oklahoma added transfer Jonathan Brightwell from UNCG in arguably the biggest move of the summer. 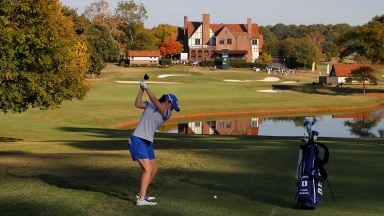