Renee Powell: I am my parents' daughter 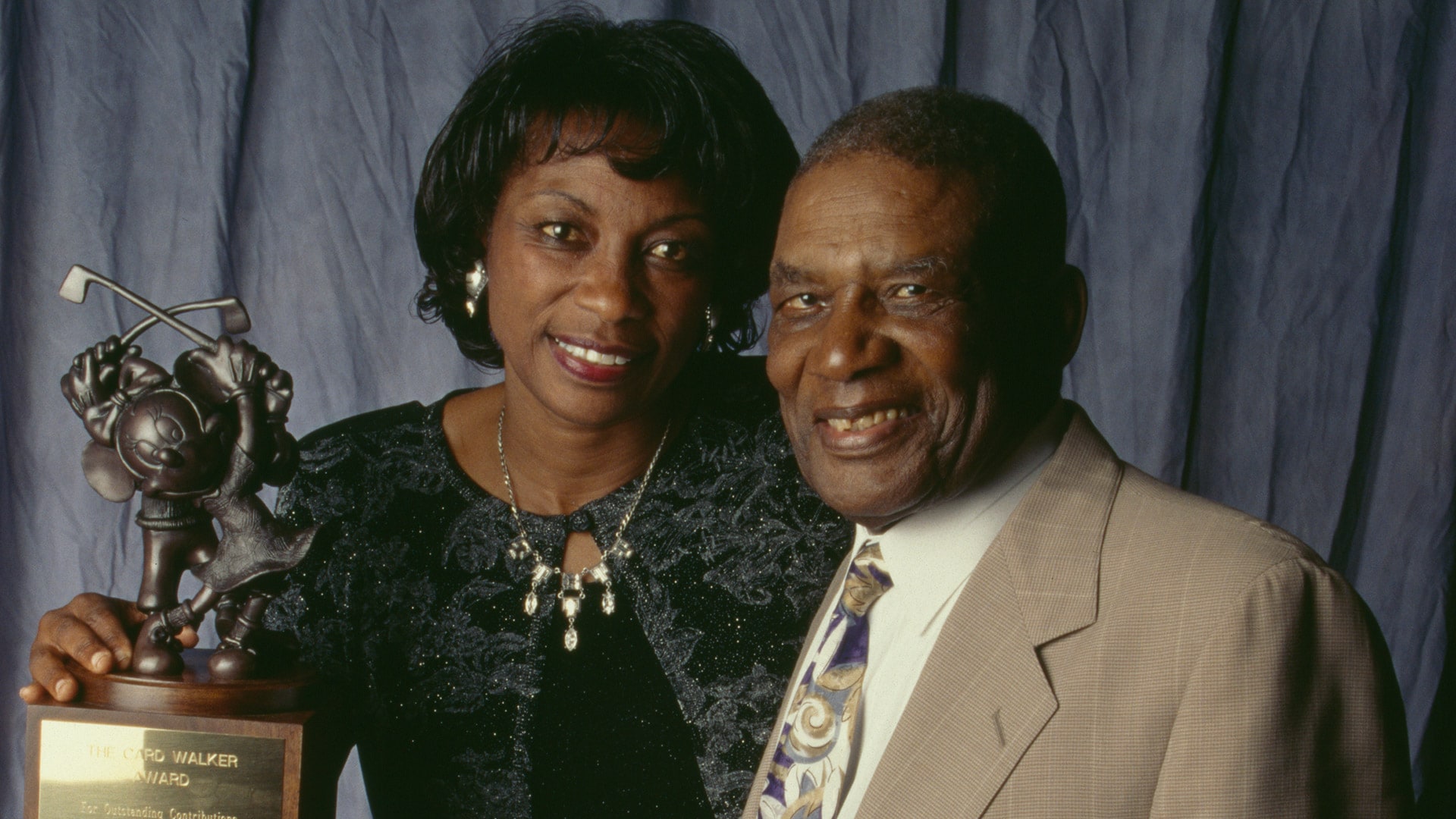 (Editors’ Note: On February 11, the Golf Writers Association of America announced that Renee Powell, the second African-American player to play on the LPGA tour and a pioneer known for her passion toward opening the game to all, is the recipient of the 2020 Charlie Bartlett Award, given to a playing professional for his/her unselfish contributions to the betterment of society. This is Ms. Powell in her own words.) The article originally appeared on LPGA.com:

I played the LPGA tour from 1967 until my final event in 1981. And while my presence surprised a lot of people on the outside, the players knew me and welcomed me as a member and fellow competitor. Golfers knew me because I’d been around the game my whole life. I’d played in the U.S. Girls’ Junior and the U.S. Women’s Amateur; played college golf at both Ohio University and The Ohio State University and qualified for the U.S. Women’s Open, all before joining the tour. But as only the second African American ever to play as a member of the LPGA tour, there were some obstacles along the way.

The problems came from outsiders. The 1960s were turbulent. Racism steeped in ignorance could be found in many places. We played in places like Shreveport, Louisiana and St. Petersburg, Florida where, at times, there were many challenges. But those issues weren’t constrained to the South. There were plenty of obstacles in the North and plenty of places throughout the country where I wasn’t welcome as a black woman in golf. On the other hand, there were always people who welcomed me, whose open arms made a difference.

I’m asked often, "Renee, how did you keep from becoming bitter given how you were treated?" Quite frankly, it never occurred to me because of the way I was raised. My family didn’t tolerate such things. When I look back on what my parents had gone through, in times that were far more difficult, I realize what positive examples they set.

My dad, Bill Powell, started caddying and playing the game when he was nine. He was from a family of overachievers. His older brother, my uncle, only went to high school for two years and graduated as valedictorian. They were the only black family in Minerva, Ohio so everybody knew the Powells. Dad found a course that was being built in 1926 that was four-and-a-half miles from their home, so that’s where he worked and played.

Always a good athlete, Dad excelled at golf. He and his brother started the first high school golf team in Minerva. The football team they played on was so dominant that one season they scored 332 points and gave up zero. Golf was his passion, though. The game seemed to him like the perfect meritocracy. The golf ball didn’t know the color of your skin and the scorecard didn’t handicap you based on race. There were little boxes, just big enough for numbers, and the lowest score won. In the optimism of his youth, Dad thought that life should be more like golf.

He also helped form the first golf team at Wilberforce University. He might have tried playing for a living after college but like so many in his generation, Dad was drafted and sent to Europe during World War II. During part of his service, he was stationed in England and Scotland and played many of the courses there, although some were closed and used as training grounds. That experience reaffirmed Dad’s love of the game’s history.

There were still plenty of things that troubled him. Black men in World War II fought and died for their country. However, my father witnessed German prisoners of war being treated better than black soldiers by our own troops. Some of those same injustices continued when he returned home. Despite being a distinguished war veteran, there were many places where Dad was not welcome.

Dad set out to rectify that problem by building a golf course that was inclusive for everyone, regardless of race, religion and skin color. Of course, there was no financing. He was told, point blank, that there was no such thing as a GI loan for a black man. So, he found two local black doctors to partner with him, each putting up a third of the money to purchase 78 acres of farmland. Dad borrowed his third from my uncle who mortgaged his house to make it work.

That was the character of the family that raised me. There was never any anger or bitterness, which eats you up inside, only determination. I’ve always wanted to do likewise, to set an example to others and not let the narrow-minded people define me as a person.

Now, 72 years after Dad found a couple of doctors to help him purchase the land to build Clearview Golf Course in East Canton, the course is on the National Registry of Historic Places by the U.S. Department of the Interior and the Ohio Historical Register. The plaque on the property honors my father’s work as “a triumph of perseverance over discrimination.” It also states that Clearview “represents the historic postwar era when athletes first broke ‘the color line’ in American sports.”

I moved to England for a time while I was still playing. Then I became a golf professional at a private club in the United Kingdom. I also designed clothes. One of the first stores to purchase my line was Harrah’s in London. And I wrote for a couple of golf magazines in the U.K. After seven years abroad, I returned to the U.S. where I worked in golf, eventually taking up my father’s mantle at Clearview Golf Course. That is where I remain to this day.

My father never got to play the courses in St Andrews. But he got to visit the town and roll a few putts on the greens of the Old Course. That happened in 2008 when I became the first female golfer and only the third American to receive an honorary doctorate from the University of St Andrews. The other two are Jack Nicklaus and Charlie Sifford. Dad, at 92, was able to travel with me and a friend of mine arranged to take him around the Old Course in a work cart to watch me play. That was the greatest gift I could give my dad. My mom had already passed, but it was a gift to both of them. For Dad to be able to go to the home of golf, sit in the balcony, and see his daughter receive an honorary doctorate was as special as it gets.

Dad passed away the next year. While he wasn’t with us on earth in 2015, I know that he was close by when the R&A announced that it was opening its membership to women and that I was among the first seven invited to join.

I know that both my parents continue to look down on the University of St Andrews Women’s Golf Team as it competes in their home tournament for the Renee Powell Cup. And I felt their presence in 2016 when I received a call telling me that the University of St Andrews, the third oldest university in the English-speaking world, planned to name its newest residence building Powell Hall, the first time a campus building has been named after an American.

My parents lived to see the integration they never got to experience in their primes, the openness they dreamed would come about when they built Clearview in 1948. I can only hope to do as much, to pass along as much to the next generation of golfers as my parents did to me. Yes, they experienced discrimination; yes, they had hardships that rattle the conscience today. But the positive examples they set – examples of perseverance, dedication, and positivity, even in the face of blatant unfairness – made possible everything I have achieved and everything I will pass on to others.

On Wednesday, February 12, the Cleveland Cavaliers will honor me for achievements in golf and for having a positive impact on society. But the honor is really for the sacrifices my family made, for those who came before me, men and women who fought the fight with good hearts and great devotion. What I do now is for them. And for those who will follow. 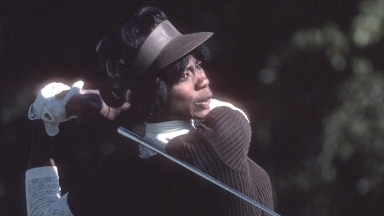 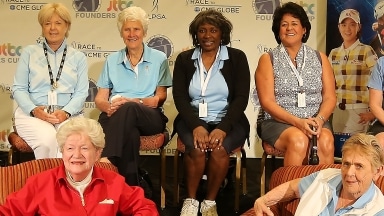 Kathy Whitworth and Renee Powell, this year's Founders Cup honorees, are bound by a fight for racial equality. 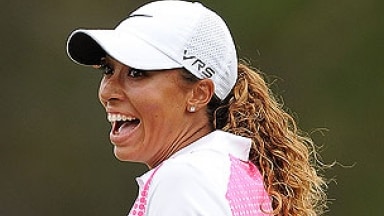 Renee Powell is eager to see Cheyenne Woods tee it up this week at the JTBC Founders Cup.