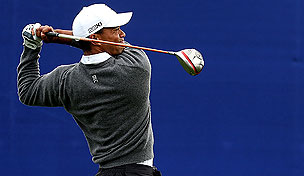 Getty Images
LA JOLLA, CA - JANUARY 27: Tiger Woods hits a drive on the seventh hole during the third round of the Farmers Insurance Open at Torrey Pines Golf Course on January 27, 2013 in La Jolla, California. (Photo by Stan Badz/PGA TOUR)  -

According to the San Francisco Chronicle, Woods will not return to next week’s event after playing it last year for the first time in a decade.

“Much to our disappointment, Tiger will not be playing in the AT&T this year,” tournament director Steve John wrote in an email to the newspaper.

Last year, Woods got himself into the penultimate pairing on Sunday afternoon, only to shoot a final-round 3-over 75 to finish in a share of 15th place. As if to rub it in, playing partner Phil Mickelson posted a score 11 shots better to win the tournament.

The decision shouldn’t come as much of a surprise. When Woods competed in last year’s AT&T, he had skipped the Farmers Insurance Open. With that back on his schedule this year, he was expected to skip the festivities at Pebble Beach.