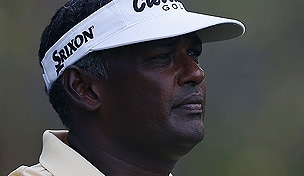 Vijay Singh, long lauded for his longevity and tireless work ethic, admitted to using a banned substance in an article in this week’s Sports Illustrated.

The SI story is centered on the company S.W.A.T.S. – Sports with Alternatives to Steroids – which sells such products as deer antler spray and hologram chips to help athletes maximize their performance. Linebacker Ray Lewis was among the players mentioned in the report.

According to the report, Singh paid one of the company’s owners $9,000 last November for the spray, chips, beam ray and powder additive. He also reportedly uses the spray “every couple of hours … every day,” and “sleeps with the beam ray on and has put chips on his ankles, waist and shoulders.”

The deer antler spray contains IGF-1 (insulin-like growth factor), which SI describes as a “natural, anabolic hormone that stimulates muscle growth” and is a banned substance in all major sports leagues, including the PGA Tour.

“We were just made aware of the report and are looking into it,” said Ty Votaw, the Tour’s vice president of communication and international affairs.

Votaw declined to comment on whether Tour officials had spoken with the Fijian, who is in the field at this week’s Waste Management Phoenix Open.

While IGF-1 is on the Tour’s banned-substances list, Votaw confirmed that, like many other professional sports leagues, the circuit does not test for either IGF-1 or HGH. “We have not determined a reliable test for it,” Votaw said. Players are regularly tested under the circuit’s anti-doping program.

On Aug. 17, 2011, the Tour issued an “anti-doping warning” via the green sheet which is circulated to players monthly, when it was learned that Mark Calcavecchia and Ken Green were endorsing S.W.A.T.S’ “Ultimate Spray.”

Attempts to reach Singh have been unsuccessful and his management company, IMG, told Golf Channel he is unavailable for comment at this time.