Rickie Fowler among those not a lock for 2021 Masters invitation

AUGUSTA, Ga. – For the better part of the last decade, a tradition unlike any other for Rickie Fowler was getting that envelope around the holidays inviting him to the Masters.

Fowler tied for 29th in the Masters and dropped two spots in the world ranking to No. 48. He has finished every year in the top 50 since 2009, the year he turned pro, and he has not been outside the top 50 at any time since he reached the semifinals of the Match Play Championship in February 2014.

Only one PGA Tour event remains after this week, the Mayakoba Classic on Dec. 3-6. This is no time to panic, but it is time to start contemplating the invitation list for next year's Masters, which is only five months away.

Fowler has company. Ian Poulter is at No. 47, one spot behind Lee Westwood. Both are playing the RSM Classic this week.

On the other side of the magic number is Kevin Streelman at No. 51, who also is playing the RSM Classic. Streelman already missed one bubble. He started the FedExCup playoffs at No. 22 and missed out on the top 30 by nine points – anyone making the Tour Championship is in the Masters. He shot 80 in the second round of the BMW Championship and a gritty 66-69 weekend left him two shots short.

Winning a PGA Tour event that offers full FedExCup points also is a ticket to Augusta National, along with being in the top 50 a week before the Masters is played. Most players would prefer to avoid that, which is why Brandt Snedeker added the Indonesia Masters three years ago. He withdrew after one round and wound up missing the 2018 Masters.

There already are 73 players in the field for next April, and with only a month of tournaments around the world, six others from the top 50 appear to be safe. That list includes Matt Kuchar at No. 32 and Justin Rose at No. 28. Both left Augusta National without being on the list just yet.

Sea Island and Mayakoba are all that remain on the PGA Tour. Europe is starting a South African swing of three events and still has the DP World Tour Championship in Dubai.

C.T. Pan and Corey Conners took care of next year on Sunday. Pan birdied three of his last four holes to match the low score of the final round at 68 and finished in a tie for seventh. Conners birdied the 16th and 17th holes for a 69 to tie for 10th. The top 12 are invited back.

Rickie Fowler prepares for the PGA at Southern Hills, but doesn't rule out playing somewhere other than the PGA Tour. 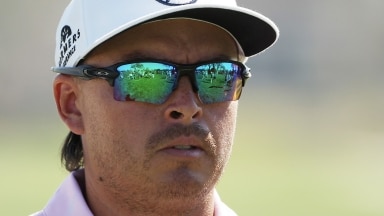 First time since '09, Fowler not in The Players

“(The Players is) one you don’t want to miss. It’s obviously a special one given that I’ve won it before,” said Rickie Fowler.