Fowler's 4-under 68 full of highs and lows 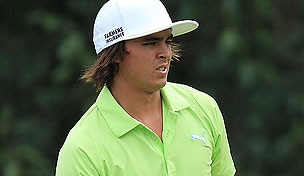 Getty Images
PEBBLE BEACH, CA - JUNE 16: Amateur Hudson Swafford plays from a bunker during a practice round prior to the start of the 110th U.S. Open at Pebble Beach Golf Links on June 16, 2010 in Pebble Beach, California. (Photo by Jeff Gross/Getty Images)  -

AUGUSTA, Ga. – Rickie Fowler watched his name being moved onto the leaderboard after his eagle at the 15th Thursday at the Masters, knowing how people were probably reacting to the puzzling mix of numbers.

“It was actually funny to see them put my name and scores up,” Fowler said. “Probably some people laughing at that.”

Fowler, 24, opened with a double bogey at the first hole. He made yet another double bogey starting his back nine. Still, he managed to post a 4-under-par 68 with six birdies and an eagle to get into contention in a wild day of highs and low.

A year ago, Fowler was inspired here after staying to watch his pal, Bubba Watson, win the Masters. Fowler hiked around the course watching Watson beat Louis Oosthuizen in a playoff. Fowler was behind the 10th green when Watson hit his memorable escape from the trees to set up his victory.

Video: Best of the 0-fers at Augusta

“It was definitely special and gave me a little bit of a kick in the butt to go win a golf tournament and ended up winning at Quail Hollow not too long after,” Fowler said. “Made me, I guess, appreciate the Masters a little bit more.”

Fowler’s 68 is his best score at the Masters in nine rounds played. He tied for 38th in his Masters debut in 2011 and tied for 27th last year. In 12 major championship starts going into this week, Fowler's best finish is a tie for fifth at the 2011 British Open.