At Ridgewood, DeChambeau has all the answers 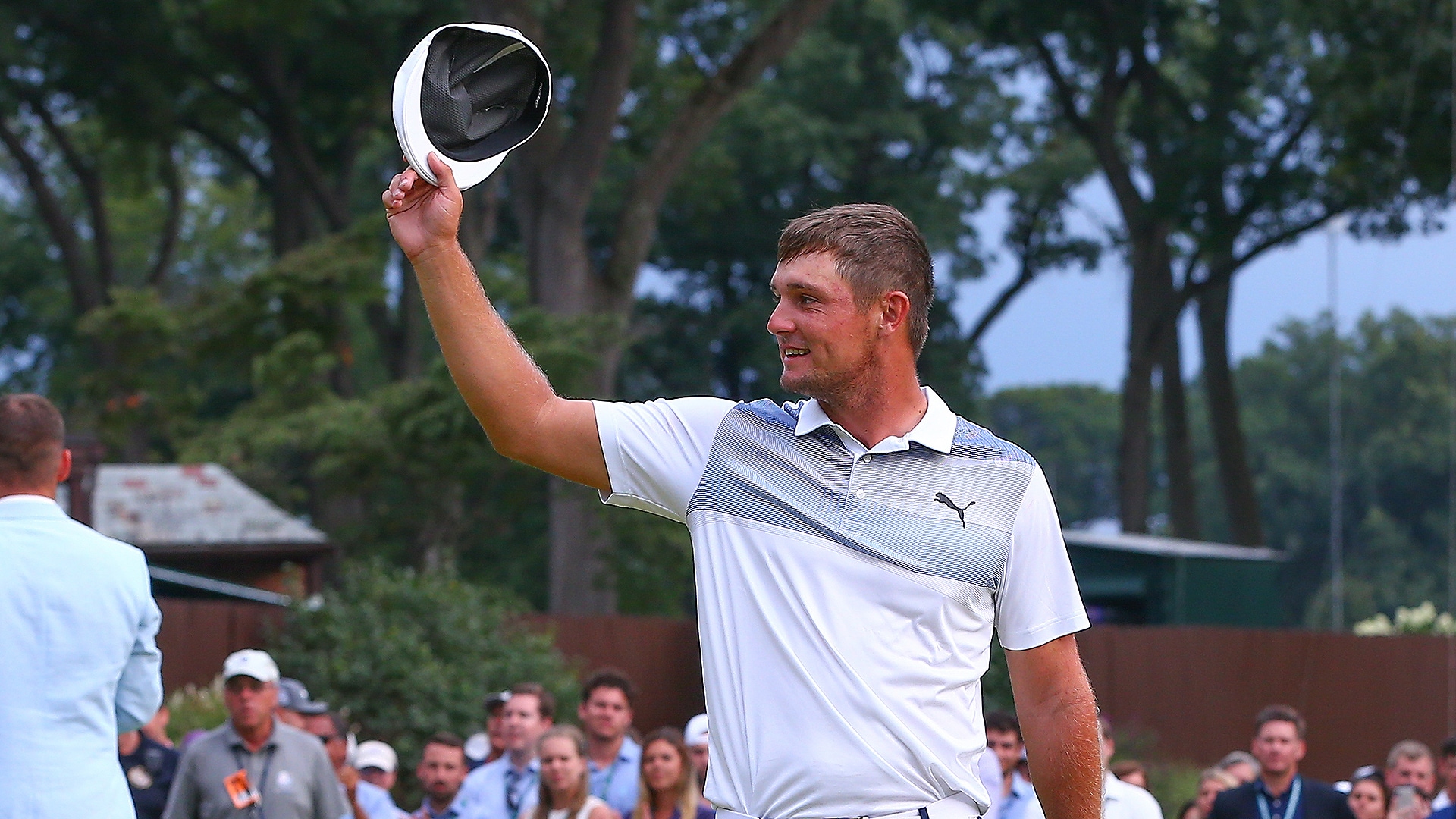 PARAMUS, N.J. – At this rate, juniors everywhere will start swinging single-length clubs and judging birdie attempts based on the line of the straight putt and the quantifiable slope.

That’s a thing for Bryson DeChambeau, who once figured he’d be working in biomechanics research and studying the efficiencies of motion if he weren’t so good at golf, and signed his endorsement deal with Cobra left-handed and backwards.

He’s also been busy this season creating believers in his single-length concept and the notion that a singularly complicated game can be simplified by allowing for all the variables. That’s also a thing for DeChambeau.

“You wait and see, he wins a few more tournaments, you find out how many people have sets with clubs the same length. Guarantee it,” Jack Nicklaus said in June after DeChambeau won the Memorial.

DeChambeau moved closer to the Golden Bear’s bold prediction on Sunday at The Northern Trust, holding off Tony Finau for a four-stroke victory and some much-needed breathing room in his quest to land a spot on this year’s U.S. Ryder Cup team.

For all the complicated formulas that must run through his head on a round-by-round basis, DeChambeau made things look exceedingly easy on the weekend in New Jersey.

He took a four-stroke lead into Sunday’s final turn with a third-round 63, and the event escalated into a blowout quickly when DeChambeau opened his day with back-to-back birdies to move a touchdown clear of the field.

Sloppy bogeys at Nos. 3, a par 5, and 9 provided a modicum of drama, with Aaron Wise moving to within two strokes with consecutive birdies at Nos. 13 and 14. But DeChambeau drove just short of the par-4 12th green for a birdie at about the same time Wise bogeyed No. 16 for a two-stroke swing and a four-shot lead that he would never relinquish.

“That little chip shot up there to 4 feet, 3 feet, that was the most difficult chip shot I had all week, and to be able to execute that under the gun, with the situation at hand where I was kind of leaking back, showed a lot in regards to my own confidence level, and what I can do under the pressure at hand,” said DeChambeau, who closed with a 69 and moved to first on the FedExCup points list with his third PGA Tour victory.

DeChambeau’s path from mad scientist to big man on campus hasn’t always been simple math. During a particularly heated practice session at last month’s Open Championship his frustration was on full display.

The next week at the European Open his struggles continued, as he took a share of the lead into the final round only to shoot 78 and tie for 13th place.

From frustrated golfer to a four-stroke victory in a month is a lot of ground to cover, even for DeChambeau.

“That struggle is what led me to this point,” DeChambeau said. “That's the thing that people sometimes miss is the fact that those moments when you're at your, relatively speaking, lowest, are the times when you can learn the most.”

But at Ridgewood Country Club there was no aggravation, no doubt and certainly no final-round collapse to open the door even slightly for those who began the day clinging to even the slightest hope.

As DeChambeau explained, he was a man on a mission.

“Bryson was extremely tough to catch,” said Finau, who finished alone in second place following a 68 and also gave his Ryder Cup chances a boost. “He didn't really open a window for us. I knew I needed to make a lot of birdies coming down the stretch, and unfortunately didn't go my way.”

It was exactly the kind of commanding performance U.S. Ryder Cup captain Jim Furyk needed to see out of DeChambeau, who along with Finau was among those on the unofficial short list of potential captain’s picks.

After he dropped out of the top 8 automatic qualifiers last month, some of DeChambeau’s frustrations in recent weeks could justifiably be traced to his desire to secure a spot on the American team that will head to Paris next month.

Perhaps DeChambeau’s most vocal, and important, proponent on the U.S. side has been Tiger Woods, who shares an affinity for the more detailed elements of the golf swing. In fact, it’s not a stretch to imagine the duo as a potential team at this year’s matches considering both appear to be locks when Furyk announces three of his four picks on Sept. 4.

DeChambeau and Woods have taken to playing regular practice rounds together and it’s clear the odd couple shares an interest in the more nuanced aspects of golf, but there are limits. Asked if he and Tiger “speak the same language” when it comes to the golf swing, DeChambeau shrugged: “At times. And at times he tells me to shut up and hit the ball. It is what it is. It's fun. I like to joke with him a little bit. It's been great,” he laughed.

This season hasn’t always been great for DeChambeau, and at times his unique approach to the game may have overcomplicated things. But for the 24-year-old his quest has become exceptionally easy – keep winning and let others decide if his unique brand of math adds up.