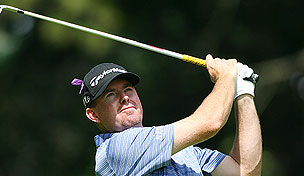 Add Robert Garrigus to the list of names comprising a vocal minority against the proposed ban on anchored putting strokes.

In an interview with ESPN's Michael Collins this week at the Waste Management Phoenix Open, Garrigus came down firmly against the ban - and blasted the U.S. Golf Association in the process.

'They are amateurs who are making rules for a professional game,' Garrigus said of the USGA, which announced the proposed ban in conjunction with the Royal & Ancient last fall.

Garrigus, who has at points anchored a long putter to his body during a career that includes one PGA Tour victory, was quick to defend those currently employing anchored strokes on Tour.

'It's unfortunate that they are trying to ban it, because the guys that are using the putter are good dudes,' he noted. 'They're not cheating. It's within the rules right now. And it's never an advantage.'

According to the report, Garrigus asked USGA executive director Mike Davis at last week's mandatory, players-only meeting in San Diego how many board members helping to create the rule change have ever struck a shot in competition. Davis reportedly told him zero.

'It's just unfortunate they've got to try to say that it's overwhelming the game,' added Garrigus. 'And I think that's ridiculous.'