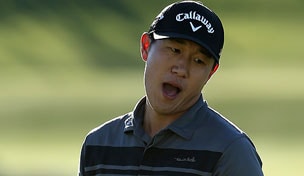 LA QUINTA, Calif. – James Hahn always kept the dream alive, even when he was working part-time at an ad agency and selling women’s shoes at Nordstrom. It’s what makes days like Thursday all the more gratifying.

In only his second career PGA Tour start, the 31-year-old rookie shot a 9-under 63 on the Palmer Course at PGA West to grab a share of the early lead at the Humana Challenge.

“I don’t ever take a day like this for granted,” Hahn said. “I remind myself every time I have a hard day that we have bad rounds and bad days and we miss cuts. We feel like the world is falling down, tearing apart.

“But I chose to do this for a living, so don’t complain.”

Hahn graduated from the Web.com Tour last season after winning The Rex Hospital Open and finishing fifth in earnings. Last week, in his first start on the PGA Tour, he tied for 67th at the Sony Open.

“As long as my dreams never die, there’s always an opportunity to play out on the PGA Tour,” he said. “And today was one of those days that I feel grateful to be here.”