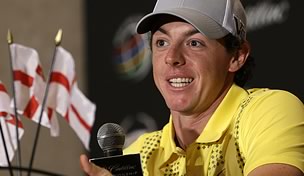 DORAL, Fla. – Rory McIlroy faced the fire Wednesday at the WGC-Cadillac Championship in his first open meeting with the media since his infamous withdrawal last Friday at the Honda Classic.

As usual, McIlroy was open, honest and gave every question a thoughtful answer.

McIlroy walked off the course at PGA National last week in the second round when he was 7 over after eight holes. He told select reporters at the time that he was not in a good place “mentally” but later released a statement that he was having trouble with a bothersome wisdom tooth, which caused him to lack focus.

“I realized pretty quickly it wasn’t the right thing to do,” McIlroy said Wednesday at Doral. “It was a mistake. It won’t happen again.

McIlroy contends that his lower right wisdom tooth has been bothering him for a year. He had braces for six months last year to try to alleviate some of the pressure and he continues to take medication. He will wait until he returns to Northern Ireland later this year, saying his dentist there is the only person he trusts to pull the aching tooth.

According to McIlroy, the core of his frustration comes from diligent work with swing coach Michael Bannon but poor results on the course, including a missed cut in Abu Dhabi, a first-round exit at the WGC-Accenture Match Play Championship and the Honda snafu. Player and coach are working to get McIlroy’s swing into a position it once was and he continues to put pressure on himself that comes with being the world’s top-ranked player.

All that frustration came to a head Friday on the 18th green, his ninth hole of Round 2, when he shook hands with playing partners Ernie Els and Mark Wilson before walking away.

“I actually think in the long run, Friday will be a blessing in disguise,” McIlroy said. “It was like it just sort of released a valve and all that sort of pressure that I’ve been putting on myself just went away.

“It’s not life or death out there. It’s only a game. I had sort of forgotten that this year.”

McIlroy spent 10 hours on the practice range both Saturday and Sunday, practiced a full day on Monday, then again Tuesday morning before taking the afternoon off to watch his beloved Manchester United. He says he's in good spirits and ready for four consecutive rounds of this no-cut WGC event.

“I go out here this week, I’m going to enjoy it,” McIlroy said. “I’ve got four rounds, thankfully. I’m just going to go out there and have a good time.”