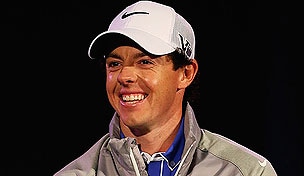 PALM HARBOR, Fla. – When did 18 holes of competition with Michael Jordan become a bad thing?

When is the long view and pacing yourself a problem? Better yet, when did Twitter become the proper outlet for constructive criticism, as if solving the world’s problems 140 characters at a time was an option?

Perhaps this is nothing more than a sign of the times, an on-demand issue to fuel a non-stop news cycle. Who would have thought a scheduled member-guest with His Airness would have caused such a digital stir, but then when you’re Rory McIlroy there seems to be no end to the amount of minutia that can be turned into a mountain.

Despite his best competitive week of the year – truth is, Doral was McIlroy’s first full competitive week of 2013 – the world No. 1 was again under the gun following reports he would play this week’s member-guest at The Medalist in South Florida with Jordan and not next week’s Arnold Palmer Invitational.

Photo gallery: McIlroy through the years

The Ulsterman ultimately withdrew from the member-guest and was replaced by Keegan Bradley, but the damage had been done. Either way on this McIlroy was clear, he has no plans to add to his pre-Masters schedule (his next start is the Shell Houston Open followed by the year’s first major) despite a particularly difficult start to his season. He said as much after every round last week at Doral.

For McIlroy it’s a simple question of pacing himself and, even at 23 years old, knowing when it is too early to hit the panic button. Yet for the vocal minority that’s not good enough.

Lost in all the armchair analysis and McIlroy’s pedestrian play – four events, one missed cut (Abu Dhabi), a first-round loss (WGC-Match Play), a withdrawal (Honda Classic) and a tie for eighth (WGC-Cadillac Championship) – is a game and a mind that is built for the long term, not a panicky quick fix on the way down Magnolia Lane.

In 2011 McIlroy gave up his PGA Tour membership because of the rigors of playing two tours and the FedEx Cup playoffs. When he returned to the Tour in 2012 he played just three Tour events before The Masters, one fewer than he will play this year.

That he finished second, first and third in his run up to Augusta last year magically mitigated any second guessing. That he went on to win five times around the world and collect his second major by eight strokes is why the Ulsterman deserves the benefit of the doubt now.

Lost in McIlroy’s rocky transition to Nike Golf and his early swoon are the realities of being a two-tour player. In 2012 McIlroy played 24 events around the globe. By comparison, Tiger Woods has averaged 17 Tour starts since turning pro in 1997 and has never played more than 21 events in a single season.

For McIlroy, balancing a transatlantic schedule with the demands of competitive relevancy will always be a high-wire act, at least as long as he remains loyal to his European Tour roots, but know this – the 23 events he played in 2010 on both tours was too much.

McIlroy on fumes is no better than the slightly rusted version.

“It is a tricky thing, especially if you're like Rory and I, and play both tours,” said Luke Donald, who spent 56 weeks atop the Official World Golf Ranking before being unseated by McIlroy last year. “You feel like you spread yourself a little bit thin. When you get off to the slow start that he did, sometimes the best way to get out of a funk like that is just to play. I'm sure he juggled that in his mind a little bit, whether to add another event or something.

“At the same time, you also are planning your schedule around majors, and trying to be ready and rested enough where you don't feel like you've played a ton of golf leading up to the majors.”

It should also be pointed out that McIlroy is not dogmatic when it comes to his schedule. Midway through last season, after missing the cut in four of five events, he added the FedEx St. Jude Classic to his card.

It is sometimes too easy with McIlroy to consider the young man out of his depth atop the world order, but at every turn he’s demonstrated a veteran’s touch when things have not gone to script.

It’s natural to second guess the Ulsterman’s jump to the Swoosh, a big-money move following great success with another brand, but to pretend we know what schedule is best for McIlroy is the acme of foolishness.

It is unfortunate McIlroy had to withdraw from the Medalist member-guest. He would have had a made-for-Twitter sounding board in Jordan on how to handle unsolicited advice – ignore it.