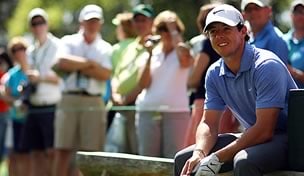 The Ulsterman enjoys the left-hander’s wild and often wayward ways on the golf course as much as the rest of us, but it’s the reigning Masters champion’s legacy down the right side of the 10th fairway that McIlroy truly embraces.

In short, Watson changed the conversation with his roping recovery from the trees in last year’s playoff to claim his green jacket. This week folks have flocked to the spot where Watson carved a 52-degree wedge into Master lore, digging through the pine needles and snapping pictures.

Some 80 yards away, on the left side of the 10th hole, a spot wedged between two cabins, where McIlroy’s Masters mission unraveled two years ago, sits quiet, unnoticed by the hordes.

The space around McIlroy is also quiet these days, ostensibly thanks to his runner-up finish on Sunday in San Antonio. If, as Tiger Woods and Co. pointed out after regaining the top spot in the Official World Golf Ranking at Bay Hill, winning takes care of everything, for the world No. 2 second doesn’t exactly suck these days.

Not after the grilling McIlroy has endured this year. To be accurate, much of McIlroy’s pain was self-inflicted, the byproduct of the scrutiny that comes with a multimillion-dollar endorsement deal. But at some point the frenzied criticism lurched into overkill.

“I thought last week went really well, almost perfectly,” McIlroy said on Tuesday. “I got what I wanted out of it in terms of playing more competitive golf, getting the scorecard in my hand, shooting scores. A bonus was getting into contention.”

Like he did last year, McIlroy added the Texas Open to his schedule to stave off a prolonged slump to begin 2013. Never mind the mechanics, the new equipment, the second guessing, the Northern Irishman needed to play because there is no substitute for “game speed.”

“I don’t think there is any concern with his game,” said Dave Stockton Sr., McIlroy’s putting coach. “It was important to get the reps. He’s still learning his schedule. I texted him when I heard (he’d added the Texas Open) and said it was a really brilliant thing.”

If Doral was where he “turned the corner” with his swing, San Antonio may be where he turned it on in 2013. The final-round 66 wasn’t enough to catch Martin Laird on Sunday, but it was the perfect prelude heading down Magnolia Lane.

If that closing-nine 43 in 2011 – which began with his wayward tee shot at the 10th – would haunt some, it’s only made McIlroy hungrier to win the tournament that means the most to him.

“I had a chance to win in 2011 and obviously that didn’t go well, but it still doesn’t change the fact that it’s my favorite golf tournament,” McIlroy said.

Whether you are a fan or not, there is no denying that McIlroy is a quick study. Just weeks after that meltdown in ’11 he claimed his first major at Congressional, and he emerged from last season’s summer slump just in time to notch Grand Slam No. 2 at the PGA Championship. So forgive the 23-year-old if he appeared reluctant to pull the eject cord when things didn’t go to script earlier this season.

“I always said my golf season is from early April to the end of August,” he said.

And he continues to learn, from his mistakes and his triumphs. Adding the Texas Open, for example, wasn’t easy because he had a charity trip to Haiti scheduled for UNICEF, but it had to be done. “Sometimes you have to be selfish,” he said, although clearly not entirely comfortable with the concept.

He learned that walking off the course after eight holes on Friday at the Honda Classic was not the right thing to do (the wisdom tooth is coming out in June, by the way). That it’s probably not best to try to overpower Augusta National, which has prompted a more measured approach off the tee this week.

But most importantly he’s learned the foolishness of expectations run amok.

When McIlroy began the season with a missed cut (Abu Dhabi), a first-round loss at the WGC-Accenture Match Play and a withdrawal (Honda Classic), it seemed as if the sky was falling.

But lost in that instant analysis was the fact that if you combined Tiger Woods and Phil Mickelson in a blender the byproduct would be McIlroy, a player capable of brilliant stretches and historic victories on demanding golf courses, scattered amid bouts of pedestrian play and missed cuts.

Prior to last year’s walk-off at Kiawah Island, Stockton persuaded McIlroy to smile more and enjoy his time between the ropes. It seems the lesson learned after a difficult start to 2013 is to listen less.