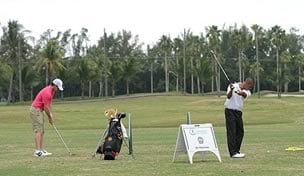 HUMBLE, Texas – Here is your latest installment of: “Professional golfers are just like us.”

Last week, Rory McIlroy was in the Miami area to watch girlfriend Caroline Wozniacki compete in a tennis tournament when he decided he wanted to hit some golf balls. So he did what any golfer would do. He lugged a stand bag over to the nearest municipal course and, wearing shorts, blasted range balls on the practice facility at Crandon Golf Key Biscayne.

“It was nice. The turf was OK. People left me alone. It was fine,” said McIlroy, who became acquainted with the course when he had a photo shoot there earlier in the week. “I got to know the people around the club and asked them if it was OK, even though it’s a public golf course. Of course it’s going to be OK.”

He reported that he hit balls there on Saturday night with Wozniacki, as another tennis star, Novak Djokovic, tagged along.

“He’s got a good backswing,” McIlroy reported. “Lot of rotation for a tennis player. Needs a lot of work on some other stuff.”

It wasn’t all fun and games, though. He explained that he got in some good practice prior to this week’s event, even bringing his own golf balls to the range in order to keep a feel for the real thing.

“You go and hit balls because you want and you love the game,” he said. “I wanted to go and practice and that was the closest place and it was totally fine. It’s no big deal.”