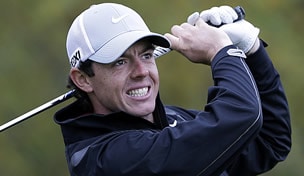 SAN ANTONIO – Rory McIlroy will emerge from this early-season swoon eventually, whether it’s here in Texas, next week among the azaleas or sometime this summer. Restraining a kid this talented is akin to tying his wrists together with a single knot. Before long, he will escape and wreak havoc.

But there is a sense of urgency now, a hint of desperation, a constant humming that didn’t exist when he was part of the laser show in Abu Dhabi, or when he was bounced from the Match Play, or when he quit after 26 holes at PGA National. The year’s first major is upon us, and it’s the one McIlroy covets most.

It’s also why he’s here, in the relative pre-Masters calm and quiet of TPC San Antonio, in a field that features only 11 players among the top 50 in the world. To peak for Augusta, it sometimes requires an alternate route.

“I just felt like I needed a bit more competitive golf heading into the Masters,” McIlroy said Wednesday at the Valero Texas Open. “It should be a good week, and a week where I can try to get my game sharp going into Augusta.”

Last week, he tied for 45th in Houston, 12 strokes behind the winner, but made the cut in a full-field event for the first time this season. That’s progress, however marginal.

Perhaps more important, he announced that he was deviating from his schedule and adding an event. TPC San Antonio bears little resemblance to Augusta National – save for the sloping and (before early-week rain) speedy greens – but McIlroy signed up at the behest of his caddie, J.P. Fitzgerald, who told him simply, “If you just play a few more rounds, I think you’re going to be ready.”

His looper was merely the latest observer to offer an opinion on how best for McIlroy to bust out of his months-long slump.

Stop practicing at muni courses, lest the woes of the average golfer afflict him, too.

Yet here he is, playing the week before a major, on a quirky course, which some contend is a calculated risk. Getting into contention can be taxing, mentally and physical. Confidence can be lost. An injury can occur. But for many, McIlroy included, competitive practice supersedes at-home maintenance. Said Padraig Harrington: “You need to have a (scorecard) in your hand to figure out exactly how things are working in your swing.”

The overarching goal for all good players is to peak for the big events. When McIlroy has peaked at majors, he has shown a penchant for lapping fields, for rewriting history, for stretching the boundaries of what’s possible. In search of the third leg of the career grand slam, McIlroy vows to be ready next week – with his mental approach, with his equipment, with his new standing in the world order, with his under-construction swing. Everything.

Naturally, throughout the course of a season, there will be peaks and valleys, ebbs and flows, good form and poor. It serves as a reminder of how spoiled we were by the greatness of Woods, who once made 142 consecutive cuts over a span of seven years, a record that might never be approached, let alone broken.

In all, Woods has missed only 10 cuts in his career. McIlroy, by way of contrast, already has nine MCs at age 23. The sport’s protagonists are indeed wired differently; they are disparate champions.

“Consistency is highly overrated,” Harrington said. “We all want to be consistent as professional golfers, but generally people that are consistent are mediocre. … You want the exciting peaks, even if that means that there are going to be some frustrating days afterwards. You’re going to be remembered in your career for the high points, not for the mediocre ones.”

For McIlroy, his mediocre play this season unfortunately has coincided with his emergence as a global superstar, the spotlight never brighter. But remember that each of the past three years, he has produced stretches of brilliant golf, only to scuffle for months. He throws haymakers, then retreats.

He won Quail Hollow in 2010 with a closing 62, then didn’t hoist another PGA Tour trophy for more than a year.

He won the U.S. Open by eight strokes, then didn’t finish in the top 25 in each of the next four majors.

He missed four cuts in a five-start stretch in 2012, then won the PGA Championship by a record eight shots before running off three more victories to clinch Player of the Year honors on both sides of the pond.

He throws haymakers, then retreats.

“When people look back on a person’s career, you don’t say Jack Nicklaus was so consistent. You could say he finished second 19 times in a major. But what you think about is the 18 majors he won. That’s what people remember. People remember the wins. … It’s only a minority that will remember the low points and will get on you for that.”

So as McIlroy tries to emerge from his early-season doldrums, and as we grapple with the concept of an imperfect superstar and world No. 2, the question remains:

When will he land the next haymaker? A kid of his immense talent doesn’t retreat for long, his hands tied only by a single knot.

“All Rory has to worry about is peaking the right weeks,” said Harrington, who then paused to consider the limitless potential.

“Wouldn’t you love to just be patient and wait for those weeks to turn up?”