Sunday at the Masters has a long history of meltdowns 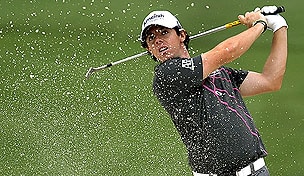 Getty Images
CHARLOTTE, NC - MAY 02: Rory McIlroy of Northern Ireland reacts to making a birdie on the 18th green during the final round on his way to winning the Quail Hollow Championship at Quail Hollow Country Club on May 2, 2010 in Charlotte, North Carolina. (Photo by Streeter Lecka/Getty Images)  -

AUGUSTA, Ga. – The seven shots Rory McIlroy took on the 10th hole last year at the Masters remain a blur.

So was the rest of his final round at Augusta National, where the 22-year-old from Northern Ireland made the wrong kind of history. He started with a four-shot lead. He finished 10 shots behind after an 80, the highest closing round by a 54-hole leader in 56 years.

If nothing else, it was a reminder how tenuous a lead can be in the final round.

There is an art to playing Augusta, which explains why nearly 40 percent of the Masters have been won by eight players. For those seeking their first green jacket, let alone their first major, finishing it off can be a challenge.

Greg Norman lost a record six-shot lead in 1996. Ed Sneed had a five-shot lead in 1979, and was still three shots clear with three holes remaining when he made three straight bogeys and lost in a playoff. Ken Venturi was on the verge of becoming the only amateur to win the Masters in 1956 when he blew a four-shot lead. Like McIlroy, he shot an 80.

McIlroy’s blown lead is enough of a memory going into the Masters. Adding to the emphasis is a bad habit of 54-hole leaders failing to win this year on the PGA Tour.

Kyle Stanley had a three-shot lead playing the final hole at Torrey Pines when he spun a wedge into the water and three-putted for a triple bogey, losing to Brandt Snedeker in a playoff. A week later, Spencer Levin had a six-shot lead in the Phoenix Open when his game imploded on the back nine. He shot 75 and Stanley - of all people - rallied from eight shots behind to beat him.

Charlie Wi lost a three-shot lead at Pebble Beach and Phil Mickelson won with a 64. The next week at Riviera, Mickelson and Keegan Bradley shared the 54-hole lead and both wound up losing to Bill Haas in a playoff.

In 14 stroke-play events on the PGA Tour, only five players have gone on to win with at least a share of the third-round lead. With that kind of history, protecting a lead is not easy.

“Not even close to easy, as we’ve seen,” Nick Faldo said.

He should know. Faldo is the only player with multiple Masters wins who has never had the lead going into the last day. Along with his win over Norman in 1996, he came from five shots down in 1989 and three shots behind in 1990, both times winning in a playoff.

“That’s the beauty of the Masters,” Faldo said. “We come back every year, all those stories are compounded, from victory and failure. That’s what makes it so special. The players will be reminded of it. Anything more than three or four shots, and you’re making assumptions. If you were to carry a decent lead into Sunday, you’d need a steel-trap mind to survive.”

That was never a problem for Tiger Woods. He was either leading or tied going into the final round in all four of his Masters wins—along with his other 10 majors.

Woods never saw it as a burden, though.

“The beauty of having a lead is that you can make those mistakes and still win,” Woods said. “But the only problem is if some guys make a run and they get some momentum going, and you’re going the other way, you give them a big shot of energy. You’ve seen some of these guys pull off some pretty low rounds. It doesn’t take much. If you get off to a poor start and the other guy gets off to a quick start, four or five shots can be made up in a few holes.”

That’s how it was for Woods last year, but only for half of his round. He made up a seven-shot deficit in nine holes, going out in 31 with a birdie-birdie-eagle stretch on the front nine as McIlroy stalled. Woods wasn’t alone, of course. Charl Schwartzel started his round with a chip across the green for an improbable birdie, and holing a wedge from the third fairway for eagle.

Three holes into the final round, McIlroy’s lead already was gone.

Jack Nicklaus never coughed up the lead going into the last round at a major, although twice he failed to win when he was tied—at Turnberry in his epic duel with Tom Watson in 1977, and at Augusta when Charles Coody beat him in 1971.

Even so, he remains annoyed at a blown opportunity in the `77 Masters, when he was tied with Watson and in the group right in front of his newest rival. He had 156 yards to the pin when he heard a big roar from behind—Watson made birdie.

“I changed my thought pattern, and I shouldn’t have,” Nicklaus said. “I had a 6-iron in my hand, planning to play it by the hole to the right and have that 15-foot putt right of the hole to win the golf tournament. I tried to stuff it in, hit it fat, hit in the bunker and let Watson play the last hole any way he wanted, which was really stupid.

“I mean, here I am, 37 years old, and I still make a dumb mistake like that,” said Nicklaus, who made bogey and lost by two when Watson took par on the 18th. “It’s one of the few that I can turn around and kick myself for what I did.”

Stuart Appleby’s demise at the Masters began early in 2007. He had a comfortable lead until taking a triple bogey on the 17th hole of the third round. With a one-shot lead over Woods on Sunday, he started with a tee shot into the trees for a double bogey. Appleby rallied to rejoin the lead until a 7-iron into the water on the 12th. Woods wasn’t much better, and Zach Johnson wound up winning.

McIlroy was that kind of player last year. When he looked back on tape, he noticed that he was looking at the ground, not walking with his head up and that boyish bounce in his step. He believes now he wasn’t ready to win a major.

Boy Wonder atoned for that quickly. Two months later, he became a major champion with a record win at the U.S. Open.

Perhaps it was only appropriate that of all the text messages and phone calls of support in the days after the Masters, the most meaningful was a call from Norman.

“It was great coming from him, because I’m sure he knew how I felt,” McIlroy said. “He said a couple things to me that I found very useful and put into practice, especially weeks like this where there’s so much hype and there’s so much buildup. I’ve said this before, but create this little bubble around yourself and just try and get into that and don’t let any of the outside interference come into that.” 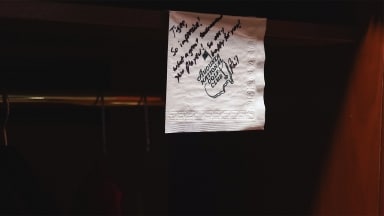 Phil Mickelson had already left Augusta National before Tiger Woods' 2019 Masters win, but not before he dropped off a note.

Rory on fall Masters: 'Maybe that’s what I need'

Rory McIlroy is looking forward to a fall Masters, saying Sunday that could be just what he needs to complete the career Grand Slam.

See who has already qualified for the Masters

With the top 50 in the year-end world rankings finalized, several players have secured Masters invites.