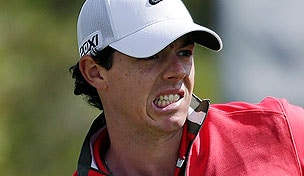 SAN ANTONIO – There would be no late-round surge again Saturday for Rory McIlroy. No, instead, he was left to lament what could have been as he remained in the mix, but four shots behind, heading into the final round of the Valero Texas Open.

“It could have been a couple of shots better, but I’m still in a decent position going into tomorrow,” said McIlroy, who shot 1-under 71 to finish at 6-under 210, four shots behind Billy Horschel (70).

One shot off the lead after making two birdies in the first three holes, McIlroy squandered an early opportunity by playing his next eight holes in 3 over par to drop off the pace.

Sure, he did well to move back into red figures for the day, making birdie on Nos. 12 and 14, but he could not get up and down from 70 yards on the short 17th, then failed to give himself a good look at the par-5 18th despite being pin-high with his second shot.

“Today it was more a case of not taking my opportunities,” McIlroy said. “I put myself in two good positions, especially on the last two holes, and I didn’t really take advantage of them.”

The last two holes stick out, certainly. But the other missed opportunities were numerous.

Then he fell even further back at the start of the back nine, three-putting from long range on No. 10, then from only 25 feet on the 11th.

“Obviously the wind made it tough to score today,” he said. “But I feel like there’s a low one in me, for sure.”

On Friday, McIlroy birdied the last three holes to shoot 67, his second-best round of the season. That alone seemed to validate his decision to play here, a suggestion from his caddie, J.P. Fitzgerald, who said that if McIlroy played a few more competitive rounds, he’d be ready for the year’s first major.

A few sloppy mistakes notwithstanding, McIlroy’s game looks markedly improved from last week, when he tied for 45th in Houston.

“Somewhere around the lead, a few shots back, it’s a nice position to be in,” he said. “It would be great to get off to a fast start tomorrow and get in the mix and sort of have that feeling again and have that feeling going into Augusta.”