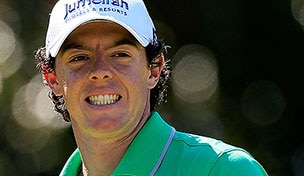 Getty Images
GIRONA, SPAIN - APRIL 30: Callum Macauley of Scotland plays his second shot into the 18th green during the first round of the Open de Espana at the PGA Golf Catalunya on April 30, 2009 in Girona, Spain. (Photo by Warren Little/Getty Images)  -

PALM BEACH GARDENS, Fla. – Someone needs to explain this one to me.

When Rory McIlroy won the U.S. Open by eight strokes two years ago, he did so under a probing microscope with all of the attention focused solely on him. Same for when he won last year’s Honda Classic and became the world’s No. 1-ranked golfer for the first time. And again at the PGA Championship, where he also won by eight with even more eyeballs watching his every maneuver.

Yet this past week, when McIlroy scrambled away from PGA National without even finishing his ninth hole in the second round of the Honda, citing severe tooth pain that affected his concentration, there was a prevailing feeling that he was struggling to handle the pressure in an appropriate manner. The pressure of being No. 1; the pressure of living up to the standards of his mammoth new Nike Golf contract; the pressure of the media’s watchful eye.

How quickly we forget.

Posnanski: McIlroy facing crippling pressure of being No. 1

It may have been a mistake to walk off mid-round – check that, it was a mistake – but this was clearly more isolated incident than repeated pattern. If the 23-year-old has proven anything in recent years, it’s that the maturity level of his golf game may be surpassed only by his maturity level as a person.

Let’s face it: He not only survives in the spotlight, he thrives in it.

Even so, McIlroy’s recent withdrawal has placed a spotlight on the spotlight, so to speak, drawing attention to all of the attention that he draws on a daily basis. There are very few people who will ever understand what it’s like to live in that spotlight – and even fewer who understand what it’s like to try to hit a golf ball in it. Those who do contend that it’s only natural for McIlroy to wrestle with the notion at times.

“I've been through it for a long time,” Tiger Woods said. “This is a slightly different era, as well. It's even faster than what it was when I came out. Things are instantaneous around the world.”

“Tiger grew up with it since he was a child,” explains Martin Kaymer. “All the media, all the attention. But for the rest of us, it’s not normal. It really takes some time.”

Kaymer is a perfect example of a player who has shied away from that spotlight. After climbing the world ranking and even winning a major championship in relative mainstream anonymity, he became No. 1 early in the 2011 season and immediately learned about life in that bubble.

“Everything you do, everything you say all of a sudden becomes very important. You’re not really used to that,” Kaymer continues. “He should enjoy being here and I don’t think that he’s doing that at the moment. It’s very tough when someone is that young in the spotlight. Obviously, he made it himself because of his success, but on the other hand, people should take it a little bit easier or else we might lose him. He’s such a great player. Now he’s going through a tough time and has to find his own way to deal with it.”

Ask any elite player and he will contend that the pressure intensifies as the profile grows. Internal pressure, yes, but external pressure as well. In particular, it’s the media scrutiny which can force second-guessing and confidence loss and myriad other residual issues.

“He’s so young and I think the media makes it tough for him,” Kaymer says. “There are more expectations, because of you guys. It’s true. Media and the Facebook and the Twitter; it all makes a difference. Even if you try to avoid it, sometimes you get confronted by it. You hear different opinions even though you don’t ask for them. It does happen and it does make a difference to your attitude. That’s just how it is. It’s not very nice. He’s 23 years old. He should enjoy playing golf, not having to deal with all that crap.”

“It must be so tough,” said Charl Schwartzel, who tasted his share of the attention after winning the 2011 Masters. “All he wants to do is play golf and everyone is all over him and bothering him. The guy just wants to play golf. I feel sorry for him.”

“We were still in fax machines, things were a little bit slower,” Woods recalls about being a 23-year-old superstar. “You've just got to think about it a little bit more before you say something or do something. It can get out of hand, especially when you get into social media and start tweeting and all those different things that can go wrong.”

There aren’t many fellow players who know McIlroy as well as Graeme McDowell, a friend and countryman who has also served as a de facto big brother over the years. He has witnessed firsthand the omnipresent surveillance that continually follows him.

“You know, it’s a lot to deal with for a young kid,” McDowell admits. “He’s surprised me a lot the last couple of years, how he’s taken this in stride winning two major championships, world No. 1. He’s really taken it in stride unbelievably well. But something’s got to give. It’s just not that easy dealing with thoughts inside your head, trying to play for other people, trying to prove things to other people.”

When in doubt with such golf-related questions, we can do a lot worse than listen to Jack Nicklaus. Another man who has served as a mentor of sorts to McIlroy, the 18-time major champion owns keen insight on what it takes to balance proper decisions both inside the ropes and out.

“He shouldn’t have walked off the golf course; that was unfortunate,” Nicklaus maintains. “If he had thought about it for five minutes, he wouldn’t have done it. I think he’s a good kid, a sharp kid. I think he’s probably just so frustrated with what’s happening with the way he’s played the last month or so that it just got to him.”

The Golden Bear contended that, “When the Masters rolls around, Rory McIlroy is going to be playing just fine,” but knowledge about the game doesn’t always translate into successful soothsaying. And so we’re left guessing and predicting, constantly attempting to interpret how every machination could affect his impending prospects.

Meanwhile, the superstars – from McIlroy to any number of household names – try to refrain from paying attention to the attention. They live in cocoons, wrapped so tightly the outside world sometimes can’t get in. Other times, though, that pressure is too much to contain. It seeps in, eating at them. It can destroy confidence and hurt performance.

Is this what happened to McIlroy this past week? Did the pressure become too much that he simply had to crawl back into that cocoon? I don’t think so. I don’t believe that a player who has lived in the spotlight for this long suddenly gets exposed by the microscope.

What I do believe is that it’s at least now an issue. A boy wonder who rarely flailed in the face of so many eyeballs is now being questioned as to whether he can handle the spotlight. And the only thing that will make the conversation dissipate is a quick and easy return to the leaderboard.

“He really just needs to get a couple of decent rounds under his belt and away he’ll go,” McDowell thinks. “But until then, there’s going to be a lot of inner talk and a lot of distraction in his head. It’s only a matter of time. But it’s a distraction. There’s no doubt about that. It’s not as easy as he’s made the game look these last couple of years.”