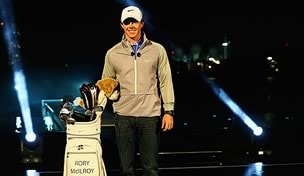 One of the worst-kept secrets in golf became official Monday, with McIlroy announcing in an extravagant news conference at the Fairmont Hotel in Abu Dhabi that he has joined Nike’s stable of players. McIlroy and fellow Nike brand ambassador Tiger Woods will make their season debuts this week at the Abu Dhabi Championship.

Dressed head-to-toe in the Swoosh, McIlroy was unveiled during an elaborate high-tech production that featured a hologram, laser show and video montage. (Think LeBron James’ intro with the Miami Heat.) When he finally emerged, walking through a cloud of smoke, he was wearing a gray Nike pullover and white Nike hat.

“I think I’ve always associated Nike with the best,” McIlroy said. “Growing up watching athletes on TV, all the best athletes were in Nike apparel.”

Terms of McIlroy’s deal were not disclosed, per company policy, but it has been widely reported that the figure is in the neighborhood of $200 to $250 million over the next 10 years, making him one of the most richly compensated athletes not just in golf, but in sports.

Of course, the addition of McIlroy, 23, gives Nike the top two players in the world, the sport’s two main attractions and, the company hopes, the main protagonists in what it hopes will be a decade-long rivalry.

McIlroy’s announcement ends what has been a busy offseason for Nike, which also added Nick Watney, Kyle Stanley and Seung-yul Noh to its stable.

Said Nike Golf president Cindy Davis of McIlroy: “This celebrates a significant moment for our brand, for our golf business and for the career of an extraordinary young athlete.”

Woods signed with Nike when he turned pro in 1996, during a “Hello, world” campaign. McIlroy’s first TV spot will be rolled out Wednesday. The clip, which was previewed Monday during the news conference, features McIlroy and Woods trading barbs and hitting shots with Nike’s new red driver. (View the video here.)

During the news conference, Nike icons Wayne Rooney, Roger Federer and Phil Knight also appeared in a taped video and welcomed McIlroy to the company. Said Woods, in the video: “Welcome to the family.”

Rumors of a Rory-Nike deal circulated long before Acushnet Co., which supplied McIlroy with FootJoy and Titleist equipment, announced that it would not renew its contract after 2012. He also had endorsement deals with Jumeirah and Oakley, which is suing McIlroy and Nike for breach of contract.

Legal issues aside, the biggest concern, of course, will be how McIlroy responds to his new Nike equipment. After all, the world No. 1 won five times worldwide in 2012 (including his second major, at the PGA), capturing the money title and Player of the Year honors on both sides of the pond.

In McIlroy’s new bag will be the Nike Covert driver, VR II Pro blade irons, VR Pro Limited Edition fairway woods (3 and 5), 46-, 50- and 54-degree wedges with “Rors” stamped on the back, and the 20XI-X ball. Most interesting, perhaps, is that McIlroy will put in play the Nike Method putter, shelving the Scotty Cameron model that he has used throughout his pro career. How he performs this season – and in particular, in his five starts leading up to the Masters – will be heavily scrutinized.

Not that McIlroy is concerned. After testing the equipment at The Oven late last year, he said he was “blown away” with his new sticks.

“I’m really confident in this equipment and excited to put it in play this week,” he said.