McIlroy running out of time to find form before Masters 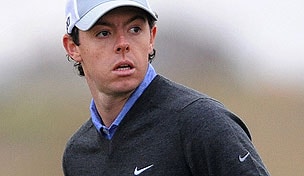 SAN ANTONIO – If it’s true that a golfer doesn’t understand the true state of his game until a scorecard is in his hand, then consider Rory McIlroy still evolving – slowly, steadily, and with the clock ticking louder than ever.

Only a few days after vowing to eliminate the “silly mistakes,” they again haunted McIlroy here Thursday, turning a good round in the wind and cold into a what-could-have-been 72 at the Valero Texas Open. He is five shots back.

Glean from it what you wish, but McIlroy has yet to break par in an opening round this season as the year’s first major – one that typically favors a hot start – draws closer.

“Even par isn’t a disaster,” he would say afterward, “and I’m still in a good position going into tomorrow.”

Though not as head-scratching as Houston – where he found the water eight times, including four ball-washers in the final round at Redstone – his opener here at TPC San Antonio was uneven enough to make you wonder whether a breakthrough was imminent.

His swing coach, Michael Bannon, was not on-site this week, an encouraging sign. That suggests the minor changes they have made to McIlroy’s swing – focused primarily on the takeaway – have taken hold, at least to the extent that he no longer requires a second set of eyes.

But on his final hole of the day, after spinning out of a drive that sailed a bit right, McIlroy sought answers. He settled into his stance, checked his alignment and made a swing that perfectly clipped the top of the tee. He walked to the side of the tee box, exasperated, and watched as Matt Kuchar and Jordan Spieth played away.

As those two ambled down the fairway, McIlroy remained on the tee box, making a few exaggerated downswings to find the proper angle. He consulted with his caddie, J.P. Fitzgerald, who could only shrug. A bogey would ensue.

It was Fitzgerald who first suggested that McIlroy add San Antonio to his schedule. “If you just play a few more rounds,” the looper told him last Friday, “I think you’re going to be ready.”

But after McIlroy’s 14th competitive round of the season Thursday, it’s clear that rust remains an issue. It continues to manifest itself on the course, spoiling rounds, and the mistakes come with only a wedge in hand.

Through eight holes Thursday he was 2 under and in a share of the lead – words we haven’t been able to type for months.

And then, on the par-5 18th, and only 128 yards away for his third, McIlroy’s wedge shot ballooned into the wind, bounced into the slope short of the green and kicked back into the creek. Bogey.

On the next hole, and only 142 yards away with a pitching wedge, he sailed the green and couldn’t get up-and-down, missing a 5-foot putt.

On the next hole, the 595-yard par-5 second, he shoved his fairway-wood approach so far right that he was forced to hit a provisional. Unfortunately, perhaps, he was able to locate his first ball, thrashed out of the trees, pitched onto the green and made another bogey, his second on the par 5s.

“I felt like I hit a good shot into the 18th, and then it came back into the water,” he said. “Then I think that sort of got to me and that’s why I bogeyed the first and hit a bad shot at the second. … You eliminate those, and it’s not a bad score.”

McIlroy says it’s “definitely more mental mistakes than it is physical,” which perhaps is a promising sign. He’s not blaming the under-construction swing. He’s not blaming the new Nike equipment, or the suffocating pressure of living up to his massive contract, or being the second-ranked player in the world. No, none of that.

But if we’re looking ahead – as we seemingly always are with Rory – then “mental mistakes” are cause for concern, as well.

The year’s first major is next week, and Augusta National requires a butcher’s precision, the product of complete and undivided attention. That’s especially true with the scoring clubs, and around the greens, which can punish those who lapse mentally.

So, McIlroy was asked: How do you clean up the mental mistakes?

“I don’t know,” he replied. “Just stop doing them. It’s hard to explain. I guess it just comes with play, and that’s why I’m here this week, just to play and get some more competitive rounds.”

Barring a significant setback Friday, he’s guaranteed only three more before Augusta. The clock is ticking, louder than ever.