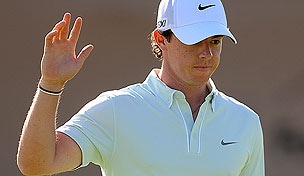 Never mind that he had never seen the course, one of the most difficult and quirky on the PGA Tour schedule.

Never mind that the major he covets most was a week away.

Never mind that his confidence was at a breaking point.

No, Rory McIlroy’s last-minute decision to turn up here has never looked better. Behold the powers of a narrative-changing 67.

By closing with three consecutive birdies at TPC San Antonio, McIlroy managed to accomplish two things Friday. He sent a much-needed energy jolt into the Valero Texas Open. And, most importantly, he gave himself a run at a title before heading into Augusta, a trip that now cannot begin soon enough.

“I don’t think it’s a surprise at all,” he said afterward. “That’s why I added it, because I felt like I was playing well. It was just a matter of getting a few more rounds to put it all together.”

The world No. 2 has spoke often of his eureka moment last year. It occurred on the range at Firestone, when his game was in near-shambles. A week later, he blitzed the field at Kiawah Island en route to his second major title. Three more victories, Player of the Year awards and a massive Nike deal ensued.

McIlroy thought he experienced a similar breakthrough after the opening round at Doral. Not quite. He followed with 69-71 before the Sunday 65 that gave him a backdoor top 10.

But in a few months, we may look back on his Thursday range session at TPC San Antonio. He had just turned in a 72 replete with “silly mistakes.” His swing coach, Michael Bannon, was back in South Florida with his family.

But as he thwacked balls on a windy and unseasonably cool day, McIlroy zeroed in on one swing thought – simplify the takeaway – which only underscores his uncomplicated approach. A day later, he missed only three greens. Quick learner.

To illustrate just how far McIlroy’s ball-striking has come in recent weeks, consider his play on a pair of par 5s Friday.

And then, at the 588-yard 18th, he smoked a beautiful, drawing tee shot that traveled 353 yards. His long-iron approach from 225 yards came to rest 25 feet from the cup, then he cozied up the eagle putt for a ho-hum birdie and 67, matching the low round of the day and putting him three shots behind leader Billy Horschel (68) heading into the weekend.

“I wouldn’t bet against him next week,” said Jordan Spieth, who was paired with McIlroy for the first two rounds. “He’s coming into form. He’s got that driver working nicely with the little baby draw. It was great.”

Said McIlroy, “If I keep hitting shots like that into par 5s, then I’ll be doing OK.”

In truth, he put on a similarly impressive ball-striking display in the opening round, only to be undone by “silly mistakes,” the same ones that spoiled his week in Houston. “Yesterday was about as poor as he could have played and he shot even,” Spieth said.

It also didn’t help that McIlroy sank just one putt longer than 6 feet, which perhaps explains why his short-game coach, Dave Stockton, checked in with a text while he handled his post-round media duties. The guess here is that the message was a congratulatory one.

“It was just a matter of playing some rounds and getting more confident and more comfortable out there,” McIlroy said. “I feel like I’m doing that day by day.”

The test now, as always, is how he responds while in contention. It’s an entirely different test, as we saw so many times with an in-transition Tiger Woods. Under pressure, a player reverts to what’s comfortable, or in this case, what used to feel normal. Rarely does that turn out well.

But for now, McIlroy is able to work the ball both ways, and he no longer hits the weak flare with his irons, and his short game looks tidier, perhaps because the long game doesn’t require so much attention.

And what we were left with Friday was unmistakable: The same swagger, the same bold shots, the same low rounds.

And yes, the same strut, only in swooshes.

Over the next two days, we will learn if he is marching toward Augusta, or merely another lost weekend.