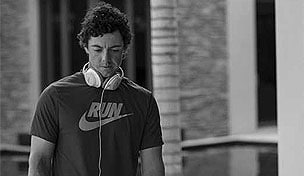 It’s been a slow start to the season for Rory McIlroy in 2013, but off the course, the 23-year-old has been singing a different tune.

McIlroy joined team Nike last month for an estimated $200 to $250 million, and has now signed a new endorsement deal with audio specialists the Bose Corporation.

The multi-year deal, announced in Florida ahead of this week’s Honda Classic, will see McIlroy serve as a global brand ambassador for the company’s headphones, portable speakers, home and automotive systems. The financial terms of the deal were not released.

'I'm a huge headphone guy,' said McIlroy, 'and Bose headphones are the best I've found. I use their in-ear headphones to work-out, and their noise cancelling headphones to travel. Whether I need motivation, or to tune-out, I reach for Bose. Their headphones go with me everywhere.'

'Rory is a once-in-a-generation athlete,' said Bob Maresca, president of Bose Corporation. 'Just like his millions of fans around the world, we're amazed by his talent and his passion. We know a lot goes into his game even when he's off the course. He loves music, just like we do, and we're thrilled to be a part of how he competes and relaxes.'