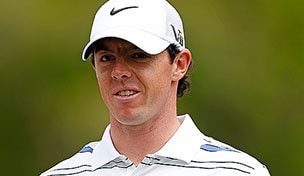 Getty Images
PEBBLE BEACH, CA - JUNE 16: Henrik Stenson of Sweden looks on during a practice round prior to the start of the 110th U.S. Open at Pebble Beach Golf Links on June 16, 2010 in Pebble Beach, California. (Photo by Andrew Redington/Getty Images)  -

How do you get to the Supreme Court?

If the 20th century joke fails to elicit a 21st century chuckle, it is at least an apropos metaphor as the golf world readies for next week’s Masters. Implied is the need for hard work to achieve Grand Slam glory, but what that means, exactly, and how players prepare for the first men’s major is a matter of personal preference and, at least this year, a question of convenience.

For the likes of Tiger Woods, the formula for major prep is a historical scorecard that needs no justification. With the exception of the WGC-Bridgestone Invitational, which is now played the week before the PGA Championship, the world No. 1 spends his days before a Grand Slam searching for answers in the Florida soil and resting.

Let the record show Woods has 14 reasons to stay with the status quo.

And if Woods’ tune-up track record isn’t enough to sway public opinion, consider that Jack Nicklaus never played the week before any of his six Masters victories and participated in the event preceding one of his 18 Grand Slam triumphs just twice.

Phil Mickelson, on the other hand, prefers to play his way into fighting shape on the PGA Tour and although his track record isn’t as stout as Woods’ the results are impressive nonetheless.

Before winning the 2004 and ’06 Masters, Lefty finished 10th and first, respectively, at the former BellSouth Classic. Prior to his 2010 Masters victory, Mickelson finished tied for 35th at the Shell Houston Open, and he was 10th at the now-defunct International before his 2005 PGA Championship triumph.

That modus operandi had to be adjusted this year because the Tour moved the Houston Open a week earlier on the schedule and replaced it with the Texas Open as the Masters tune up.

“For me personally, I like playing a tournament that's similar to what we'll be playing,” Mickelson said last month. “For a long time we had a pretty good tournament before the U.S. Open (Buick Classic at Westchester). But now it's Memphis (Fedex St. Jude Classic). It's so hot that I run out of energy, and going into the Open I'm drained, so I don't play there anymore.”

As for this year’s move to San Antonio, a tight golf course often buffeted by wind, Lefty said it was an easy decision: “It isn’t really conducive to getting ready for Augusta, and that makes it difficult for me personally, so I'll end up going to Augusta a few days early.”

But if playing the tournament that precedes the Masters is a matter of taste – not everyone likes vanilla – the general tactic used by historical front-runners at Augusta National has remained surprisingly predictable.

Consider that before each of his six victories at the Masters, Nicklaus played an average of six events. Woods has a similar average before each of his four green jackets (6.75 starts), while Mickelson has average 7.66 tournaments before his three victories at Augusta National and Arnold Palmer is the undisputed Iron Man, playing an average of 10 ½ events before his four triumphant trips down Magnolia Lane.

Whether he knew it or not, McIlroy’s decision to pencil in a last-minute start at this week’s Texas Open, which features just 17 of the 93 players currently bound for Augusta National, was a nod to the historically obvious.

With just five tournaments in the books in 2013 – including a first-round loss at the WGC-Accenture Match Play Championship and an early exit from the Honda Classic after just 26 holes – the world No. 2 seemed less interested in scheduling and burnout than he was competitive continuity when he hastily added the San Antonio stop.

At just 23 years old the Ulsterman has proven to be a quick study, it doesn’t matter where you play in the weeks leading up to a major, as long as you play.