McIlroy three back of Horschel on Day 2 in Texas 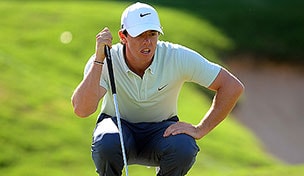 SAN ANTONIO – Rory McIlroy didn't anticipate an encounter with the native plant life when he signed up for the Texas Open.

Despite just such a happening on Friday, the world's No. 2 golfer matched the low round of the day with a 5-under-par 67 and moved within three shots of leader Billy Horschel, continuing his last-minute preparations for next week's Masters.

McIlroy, who decided to play in the tournament late last week, had seven birdies – including his final three holes – and overcame a bogey on No. 9 after driving into the rough and catching his left shin on a nearby cactus.

The misstep dropped McIlroy to 1 under, but he rebounded with key putts on the final three holes for birdies and pulled well within reach of the leaders entering the weekend.

''It was a good way to finish,'' McIlroy said. ''It will definitely make dinner taste a little nicer tonight and give me a couple of more hours in bed tomorrow morning.''

The 23-year-old two-time major winner is three shots back of Horschel, who birdied his last two holes to post his second straight 4-under 68.

Three players – Daniel Summerhays, Charley Hoffman and Steven Bowditch – are two shots back at 6 under, while McIlroy is tied with six others at 5 under.

Thursday's co-leaders, Matt Bettencourt and Peter Tomasulo, each shot a 1-over 73 and fell four shots off the lead.

Bettencourt went as low as 8 under in the surprisingly calm Texas weather on Friday morning before falling back after a stretch of three bogeys in four holes once the wind picked up ever so slightly.

Summerhays also reached as low as 7 under before falling back with a bogey on No. 9, but it was Horschel who separated himself with his late flurry.

Horschel jumped from 60th to 24th on the money list after a second-place finish at last week's Houston Open. He closed out Thursday's round with a birdie, and he one-upped that on Friday – closing with a pair of 11-foot birdie putts on No. 17 and 18 to vault into first.

''Today, I knew there was not going to be very much wind, so you had to take advantage of this golf course,'' Horschel said. ''I warmed up really well, probably hit the best I have on the range in a month and a half before a round.''

He needed 28 putts on Friday after taking only 25 a day earlier, but Horschel hit 11 of 14 fairways after hitting only seven a day earlier.

Horschel has made the cut in all nine of the events he's entered this year, extending his Tour-best streak to 21 made cuts in a row, but he has yet to win a PGA Tour event.

Now he faces a leaderboard filled with winning experienced players behind him, including four players – McIlroy, Jim Furyk, Retief Goosen and Lee Janzen – who have combined to win seven majors.

''I couldn't care less if they've won majors or not, honestly,'' Horschel said. ''I know they're good players and what they've done, but I feel I'm a good player in my own right.

''I think you have that mindset. You can't think that these guys have won majors, and then you start worrying about what they're doing and you forget about yourself.''

McIlroy is the most recent major winner of the pursuers, having won the PGA Championship last August. However, he's struggled for much of this year following an equipment change and recently lost his No. 1 ranking to Tiger Woods.

McIlroy has just one top-10 finish this year, and he decided late last week to add the San Antonio stop to his schedule to add competitive rounds prior to next week's opening major of the year.

It's a move that appeared questionable after an up-and-down even-par 72 on Thursday, but not anymore after Friday's scoring binge.

McIlroy still had fits with his driving, hitting only 9 of 14 fairways, but he made lengthy birdie putts on each of his final three holes – including a 26-foot strike on the par-3 16th. He narrowly missed a 24-foot eagle putt in front of a surging gallery on the 18th after reaching the par 5 in two shots.

It was after his run-in with the cactus on No. 9 that McIlroy made his move, shooting a 4-under 32 on the back nine.

On the ninth, he drove into the left trees and scraped his left shin on the prickly pear while searching for his ball. McIlroy rubbed his leg afterward and his approach went to the right of the green on the par 4, leading to his final bogey of the round.

''I shouldn't have been where I was at nine anyway, so I guess it was deserved,'' McIlroy said.

McIlroy's 5 under matched Hoffman and K.J. Choi for the best round of the day, with the Texas weather expected to warm considerably on Saturday and the wind to pick up – making the 7,435-yard layout even more challenging.

''I just like giving myself a chance coming in on Sunday,'' Hoffman said. ''I think I'm a pretty good competitor. If I have a chance with a few holes to play, that's all I can ask for.''