McIlroy willing to trade distance for accuracy at Augusta 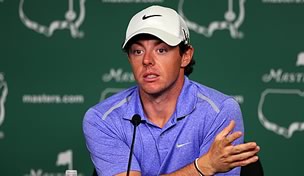 AUGUSTA, Ga. – Rory McIlroy continues to be as refreshing an interview as there is in this sport. He brought the goods again Tuesday during his pre-Masters chat at Augusta National.

McIlroy was upbeat, engaging, confident, informative and in good spirits as he tries to win his first green jacket in his fifth Masters start. He said unequivocally that the demons of the 2011 debacle have been slayed, that he’s as comfortable with his swing as he’s been all year, that he has a new strategy and that anything less than a victory this week would be a disappointment.

Oh, and McIlroy’s girlfriend, Caroline Wozniacki, will caddie for him Wednesday during the Par 3 Contest.

But back to the real golf …

McIlroy says he’ll adopt a new strategy off the tee this week. He’s so confident with his iron play that he doesn’t mind giving up distance off the tee if it means he has a better chance to play from a primo position in the fairway.

“Is there really a difference between hitting an 8-iron or a 6-iron into a par 4,” McIlroy asked. “There are certain holes on this golf course that if you play them the right way, you play them smart, you can make a birdie every day or you can definitely limit the mistakes and not make a big number.”

The big number is what cost McIlroy a chance at victory two years ago, when he led after 63 holes but made triple bogey on the 10th hole Sunday. McIlroy tied for 15th.

“It’s my favorite tournament of the year,” McIlroy said. “I had a chance to win in 2011 and obviously that didn’t go too well. But still doesn’t change the fact that it’s my favorite golf tournament.”

McIlroy admitted that it took him awhile to get over the awe of Augusta National.

“Took me awhile to get comfortable taking a divot,” he joked. “Once you get over that, you treat it like any other golf course. I feel like it’s a place that I could do well at, for sure.

“Every time you come here to Augusta, you’re wanting to win that green jacket, and every time that you don’t it’s another chance missed.”