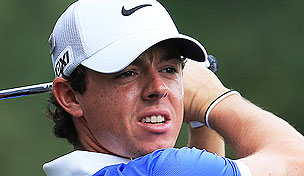 AUGUSTA, Ga. – Birdies were out there Thursday at the Masters for Rory McIlroy. Unfortunately for him, bogeys were too.

McIlroy made five birdies and five bogeys to shoot a first-round 72. He’s six behind co-leaders Marc Leishman and Sergio Garcia.

The biggest problem for McIlroy was that he never was able to keep momentum on his side. On three occasions he followed up a birdie with a bogey on the next hole.

Statistics don’t often paint a proper picture but in this case, they do. McIlroy hit nine of 14 fairways, 14 of 18 greens in regulation and took 32 swats with the putter. So McIlroy was finding the putting surface, but the 32 putts just won’t cut it on a day when Rickie Fowler led the field with 21 putts.