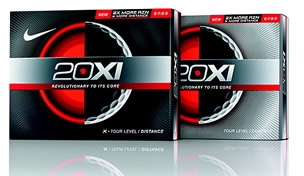 With all the talk about Rory McIlroy switching to Nike golf clubs at the start of the year, the fact that he also started playing Nike golf balls was almost overlooked. But he decided to go that route as well, and his choice was the Nike RZN 20XI X. It is one of two models that represent the latest iteration of that line, first released two years ago.

As was the case with the original RZN 20XI, these golf balls feature a proprietary resin core made of a highly neutralized polymer the company developed with a team of material and science experts at DuPont. Only this version is designed to deliver an even faster ball speed, thanks to advancements in RZN chemistry.

In addition, Nike has made the core in this premium line, which now includes the RZN 20XI and RZN 20XI X, larger and softer. According to Rock Ishii, the company’s product development director for golf balls, that improves feel off all shots as it maintains driver distance and forgiveness. In addition, Nike engineers added a RZN mantle to encourage greater length off irons while providing a softer feel for shots around the green.

The idea, Ishii says, was to create a more balanced tour model golf ball that is as accurate as it is responsive and long.

Both versions of the new RZN 20XI feature four-piece construction. Each has a urethane cover, but the one used for the 20XI X, which Ishii describes as the “distance-oriented tour model,” is slightly firmer for enhanced distance and accuracy.