Round 1 of Hyundai TOC pushed back three hours 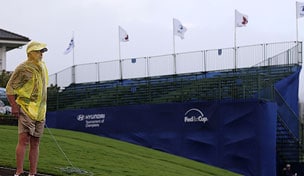 KAPALUA, Hawaii – Apparently 2013 is the golf season that doesn't want to start.

After heavy wind and rain wiped away what was supposed to be the Hyundai Tournament of Champions opening round on Friday, the delayed start has now been delayed itself, with tee times now moved back three hours since this morning.

It remains to be seen whether officials will be able to stick with that schedule. Saturday's forecast calls for more heavy winds – even gustier than Friday – throughout the day. The strongest winds are expected between 9 a.m. and 2 p.m. local time.