Saturday play called off at the Hyundai TOC 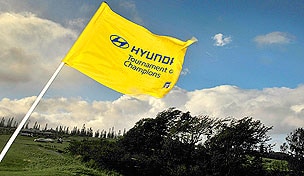 Getty Images
TURIN, ITALY - MAY 06: 14 years old Domenico Geminiani of Italy plays his approach shot on the 12th hole during the first round of the BMW Italian Open at Royal Park I Roveri on May 6, 2010 in Turin, Italy. (Photo by Stuart Franklin/Getty Images)  -

KAPALUA, Hawaii – Thirty players eagerly awaited the chance to start their 2013 PGA Tour season Saturday morning, but to no avail.

Sustained winds of 25-35 mph and gusts in excess of 40 mph forced Tour officials to delay starting times on three occasions – in one-hour increments beginning at 7:30 a.m. – Saturday morning before calling play for the day entirely, at 10:30 a.m.

'It's a difficult situation,' Hunter Mahan said. 'But with the gusts in excess of 40 miles per hour, the ball's basically just moving on its own.'

Players were set to tee off at 7:30 a.m. local time for Round 1 of the Hyundai Tournament of Champions, but endured more than three hours of delays, waiting for the storms to pass.

Officials were on the ground at 6:30 a.m. checking the pins and rolling balls on the greens.

'I dropped a ball on the 10th green ... and rolled off 20 yards off the front of the green,' vice president of rules and competition for the PGA Tour Slugger White said.

'You’re going to have to be patient,' Mahan said. 'Pick your spots to be aggressive at, but I don’t think it changes anyone’s frame of mind right now.'

'The guy that gets hot tomorrow is going to be a big advantage,' Brandt Snedeker said. 'If you get on a roll, you can make a lot of birdies and hopefully get things going in the right direction.'

The Sunday forecast calls for winds 15-25 mph and gusts up to 30 mph, with less precipitation than Kapalua had on Friday and Saturday.

Officials hope to complete 54 holes by 3:00 p.m. local time Monday. If that doesn't happen, they'll look at extending the event another day even though next week's Sony Open in Honolulu is set to begin Thursday.

'I think you can determine a champion with 54 holes with no problem whatsoever; 36, I don't think so,' White said.

'Tuesday is not out of the realm as yet. But let's get through tomorrow first.'